Lukashenko talks about visiting Putin and on tensions with Ukraine 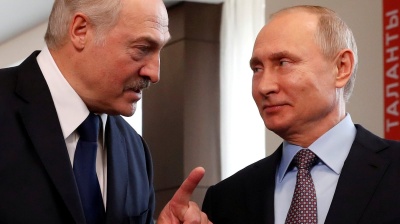 Lukashenko and Putin / Picture from theguardian.com
By bne IntelliNews February 16, 2022

Lukashenko has often used meetings with former party leaders of parties from post-Soviet countries; usually these are people from Soviet-nostalgic socialist parties. Last May, he met with the Chairman of Moldova's Socialist Party (generally viewed as the Russia-leaning party), Igor Dodon. Last April, after he had met with Ukrainian parliamentarian Yevgeniy Shevchenko, the latter's "Servant of the People" Party demanded an explanation from him and later kicked him out.

Meetings like this are likely done in an effort to try to signal support for parliamentary forces in democratic countries and to show that he's engaged with politicians and cares about encouraging a multipolar domestic political landscape. However, only a person who hasn't followed the events in Belarus for the last two years could see these meetings as anything else but attempts at sending various political signals to the countries in question.

During the meeting, Lukashenko revealed that he was to meet with Putin "soon", adding: "They are shouting: When will the troops be withdrawn? Listen, this is our business with Putin. We will meet in the near future and schedule the withdrawal of the Armed Forces of the Russian Federation from here. It is our business."

This is Putin and Lukashenko's first meeting this year, and most likely, any military plans for the coming weeks will be discussed. The meeting comes as Russia has amassed a suspected 30,000 soldiers in Belarus and a total of 130,000 soldiers near the Ukrainian border; on top of this, Belarus and Russia are engaging in military exercises suspiciously similar to repelling counter-attacks from Ukrainian territory.

Russia’s concentration of troops and military equipment along Ukraine’s border has made western countries increasingly worried about a Russian invasion of Ukraine. Ukrainians, Russians and Belarusian, on the other hand, don’t seem to be afraid of this happening, at least not for now.

Recently, Ukrainian authorities heavily increased the border checks on Belarusian citizens, asking them to clearly state and provide proof for the reason of their visit. Although the Belarusian authorities said they hadn't received any official note on the changes in rules and procedures for entering Ukraine, they most likely have an idea why this happened.

Last week, Ukraine's security service SBU reported that it had arrested a Ukrainian man recruited as an agent for the Belarusian security service KGB. According to the SBU press service, the arrested man had admitted that he was planning various forms of terror attacks in Kyiv, organising various forms of unrest as well as staging provocations against foreign diplomats and media representatives. This is most likely what's made Ukraine increasingly wary of Belarusians entering its territory.

Although the diplomatic tensions continue to rise, hopes for diplomatic solutions still exist, according to Russia's Foreign Minister Lavrov. Moreover, the Belarusian-Russian military exercises are soon coming to an end, with the last stage scheduled to finish on 20 February, and Ukraine has even been allowed to send a defence attaché to watch the rest of the exercises. The question on everyone’s mind is, of course, how many soldiers Russia will leave behind in Belarus after the exercises are finished.

Both Russian and Belarusian officials have stated that there is no invasion of Ukraine planned. However, Belarus' PR has, as usual, fallen a little flat, since ministers try to calm down the situation while Lukashenko increases his generally hostile rhetoric towards Ukraine almost by the day. During his meeting with Moroz, Lukashenko slammed Ukraine's "anti-Belarus" policies. He called the Ukrainian leadership "brainless" for recently having stopped buying Belarusian potassium while also banning it from being sold through Ukrainian ports.

Lukashenko went on by saying that nobody "plans to fight against" Ukraine and claimed that it was in fact the West which was trying to unleash a conflict. Lukashenko has repeatedly emphasised that any military escalation is the result of Nato enlargement, troop movements and western foreign intelligence meddling. According to him, it is clearly the West who "needs this war".

While a war with Ukraine would be bring immense damage to the Belarusian economy and is likely to spark protests within the ruling elite, Lukashenko's increased war rhetoric does serve his own domestic political interests for now. It makes one wonder, who needs a war?