Lukashenko steps up political repression as he strengthens ties with Putin 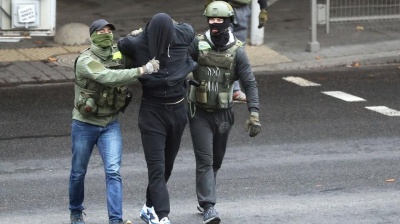 In the last couple of months, the Minsk regime has made a significant number of arrests and given out sentences and in numerous other ways tightened political control around the country.

These events come as Belarusian President Alexander Lukashenko is evidently stepping up his role as Putin’s ally in Russia’s full-scale invasion of Ukraine.

Thus Minsk is not remaining idle while the exiled opposition works hard to gain further political legitimacy. Perhaps the Belarusian strongman and his closest confidants also consider increased repressions to be necessary if they intend to move forward with what they suspect will be a widely unpopular decision.

This year, the exiled opposition has tried to consolidate its forces and increase their co-operation with both Western governments and Ukraine. The office of exiled opposition leader Svetlana Tikhanovskaya has worked hard to assure that the rights of Belarusians fleeing political repressions are considered abroad.

The remaining domestic opposition organised anti-war protests in February, which were immediately and brutally shut down by Belarusian security forces, with over 800 arrested in just a couple of days. However, a group of people calling themselves the “Railway Partisans” successfully sabotaged the Belarusian railway system in the spring, which caused serious problems for Russian military transports to Ukraine.

A court in Belarus’ Grodno region recently sentenced several Railway Partisans to prison and penal colony terms ranging between 2.5 and 25 years. Some of the defendants were sentenced on accusations of “terrorism”, “membership in a criminal organisation”, “smuggling” and “treason.” Like many political prisoners who’ve gone through the Belarusian justice system, they made numerous complaints about torture.

Besides hunting for anti-war activists in Belarus, the Minsk regime has also continued to arrest and sentence other opposition-minded people to lengthy prison terms for alleged crimes committed two years ago.

In October, two trade unionists were sentenced to four and five years in a “penal colony” for leading a strike in a car factory during the protests against the results of the Belarusian presidential election 2020. Shortly after, the Minsk court sentenced Belarusian journalist Ales Lyubyanchuk to three years in prison for “creating an extremist group and taking part in its activities.” According to the Belarusian Association of Journalists (BAZh), the sentence was a punishment for Lyubyanchuk’s co-operation with foreign news agencies that actively covered the 2020 protests.

In October, the Belarusian regime launched new legal proceedings against Tikhanovskaya and several other senior opposition figures. They were accused of, among other things, “participating in mass riots, inciting social hatred, conspiring to seize power and founding extremist organisations.” A few days later, Belarus added 625 people to a list of “extremists.” With this listing, the blacklist of Belarus’ Ministry of Internal Affairs reached a total of 1,469 people.

According to the presidential administration, any new civil society organisations will be forced to work closely with Belarusian state authorities, which will assure that they operate with “social responsibility.”

Furthermore, all newly formed political parties will have to meet the requirements set by the “Belarusians People’s Congress.” The congress includes state officials as well as organisations and people loyal to the regime. However, these parties’ participation in public elections and entrance to the parliament was never mentioned by Lukashenko or the presidential administration. Instead, the newly formed parties will be allowed to join the Belarusian People’s Congress if they fulfil its requirements. Currently only four organisations loyal to the regime fit the suggested criteria.

In a statement that has echoes of the Bolshevik Party’s rhetoric from the 1930s, Lukashenko told his state officials that “deviating to the right or to the left should be followed by the liquidation of the political party or the public movement. Only then will we be able to keep the country on some track, within some framework.”

Amid the recent crackdown, the UN Special Rapporteur on the human rights situation in Belarus has continued to criticise the Minsk regime. Anaïs Marin emphasised that Minsk's increased restrictions of civil and political rights as well as its systematic use of arrests and detentions to silence critics are forcing people to flee.

However, "the official Minsk" is not at all concerned with what the UN or the rest of the world thinks, since it continues to create new laws which limit freedom of speech and increase the state’s repressive powers. In fact, only a couple of days after receiving new critique from the OHCHR, Lukashenko signed a law which terminated the Optional Protocol of the UN International Covenant on Civil and Political Rights’ applicability to Belarus. Thus Belarusians are now unable to file complaints about human rights violations to the UN from Belarus.

Parallel to the countless arrests, sentences, initiated legal proceedings against opposition figures and additions to the list of “extremists,” Belarusian state officials also considered an “Amnesty bill” in late October.

The bill proposes to allow for amnesties in connection with Belarus’ “Unity Day,” which was introduced by Lukashenko last year and is held on September 17. According to the Chairman of Belarus’ Parliament, this bill is meant to cover around 8,000 people. While all of these people are certainly not going to be released, it likely signals an attempt by the regime to open up for the pardoning of political prisoners without losing face.

To sum up, the human rights situation as well as the spiral of political repressions that has been ongoing since 2020 do not seem to have an end in sight. While Minsk may wish to ease up the pressure on available prison cells for Unity Day 2023, the Amnesty bill should not be interpreted as a sign of any de-escalation in its fight against the opposition.

Unlike Kazakhstan’s castling in 2019, where Nursultan Nazarbayev continued to lead from the shadows, Minsk is taking its time with creating a well-defined state-sanctioned political activism in Belarus. This will give the appearance of some sort of “democracy,” while in reality only contributing to a very small amount of new (but well-filtered and politically insignificant) opinions reaching Lukashenko’s desk.

After Lukashenko made himself into Putin’s vassal this year through his participation in Russia’s full-scale invasion of Ukraine, further economic and political integration with Russia can also be expected to lead to the opposite of a “political thaw.”