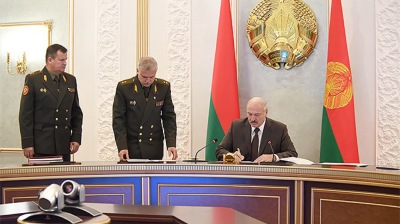 Belarusian president Alexander Lukashenko signed a decree that will impose martial law and transfer power to the Security Council in the event of his death / wiki
By bne IntelliNews May 10, 2021

Belarusian President Alexander Lukashenko signed a decree that calls for martial law and lays out the transfer of power to the Security Council dominated by his son in the event of his death on May 9.

The Belarusian president caused a stir two weeks ago saying he had an important announcement to make shortly before he was due to travel to Moscow to meet with Russian President Vladimir Putin that led to speculation that he was about to announce some details of a proposed merger between the two countries under the terms of the Union State deal signed in 1999.

However, it turned out that he had just been preparing the ground for his succession. Lukashenko claimed that Moscow had uncovered an assassination plot by Belarusians living in Moscow that planned plunge Minsk into darkness by taking out the city’s power supply and that both Lukashenko and his son Viktor were to be murdered.

Putin backed up the claim. Viktor serves on Belarus’ Security Council and he is believed to be the real force in the body. Lukashenko has been promoting his son over the years and grooming him as a possible successor.

Lukashenko signed Decree No. 2 dated May 9, 2021 "On the protection of sovereignty and constitutional order". The document says that in the event of the death of the first person as a result of an assassination attempt, an act of terrorism, external aggression or other violent actions, all state bodies and their officials act in accordance with the decisions of the Security Council, whose meetings are chaired by the Prime Minister.

Under the Belarusian constitution the prime minister is next in line, but the decree limits the prime minister’s power, effectively giving control of the country to a committee in the form of the Security Council.

At the same time, a state of emergency or martial law will be immediately introduced on the territory of the country in the event of the president’s death that will be controlled by the Security Council that has absolute power during this time. The decisions of the Security Council are binding on everyone and are subject to unconditional implementation.

Following the president's death the Security Council should organise new elections, but the council has the power to decide when and how the elections are held.

According to Lukashenko’s press service, the decree is aimed at preserving the country's independence and sovereignty. The decree comes into force from the moment of its signing.

Earlier, Alexander Lukashenko called this decree "one of the principal decisions in a quarter of a century of presidency."

According to him, in the event of his death, the country will have a "collective president in the form of the Security Council." “Even if I’m not there, in the popular saying, “over my dead body” and so on, they will not succeed.”

Lukashenko said that he had made the decision a long time ago, "when it was all unfolding," and not because he wanted to "hand over or betray something to someone."

Who is the Security Council member today?

Lukashenko has been beefing up the Security Council since the country was rocked by mass protests following last year’s disputed presidential elections on August 9 and it has now stacked with loyalists members of the security faction.

On March 15, Alexander Lukashenko signed a decree that increased membership of the Council from five to eight people.