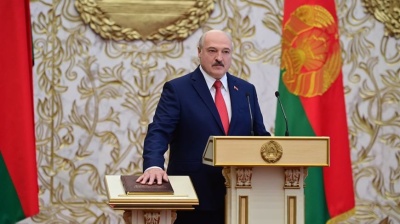 "I am not going to be the president once the new constitution is in place," Belarusian President Alexander Lukashenko said in comments shortly after meeting Russian Foreign Minister Sergei Lavrov last week
By Ben Aris in Berlin November 29, 2020

Belarusian President Alexander Lukashenko said he would step down after a new constitution is adopted, the state-owned BelTA news agency cited him as saying on November 27.

Lukashenko’s comments come two days after he met with Russian Foreign Minister Sergei Lavrov in Minsk, who reminded him to “keep your promise.”

While the context of Lavrov’s comment was not entirely clear, he confirmed he was referring to commitments Lukashenko made during a meeting in Sochi with Russian President Vladimir Putin on September 14. At that meeting Russia offered Belarus a $1.5bn loan and the two talked about reforming the constitution.

Over the weekend opposition leader Svetlana Tikhanovskaya reached out to Putin and called for a meeting. The opposition remains pragmatic and is not overtly anti-Russian. Tikhanovskaya and her colleagues from the newly established Coordinating Council have said from the beginning that they see any solution to the political crisis being resolved in co-operation with Moscow.

"I'd like to talk. And Belarusians are waiting for it very much. Not the support of the regime, but statements about Belarusians, about our desire to build the future together, but not the pursuit of one person,” Tikhanovskaya said in a speech on November 28.

Lavrov also brought up constitutional reform during his meeting with Lukashenko last week.

"We of course have an interest in the situation being calm, stable, and we think that beginning the constitutional reform initiated by the country's leadership would contribute to this," Lavrov said.

It is widely believed that the Kremlin would like to see Lukashenko leave office, or at least remain only in a ceremonial role, and power transferred to a candidate acceptable to the Kremlin. What the Kremlin doesn't want to see is a disorderly transfer of power where it has no opportunity to influence the process. Concluding the Union State deal is also seen as a Kremlin priority.

The statement was greeted with widespread scepticism. Lukashenko has been talking about constitutional reform for several years already, which was widely seen as a sop to rising dissatisfaction to his 26-year rule.

Lukashenko has suggested that first new parliamentary elections are held and then a draft constitution is put to the people in a referendum after which new presidential elections could be held – a process likely to take several years.

Tikhanovskaya and the Coordinating Council have insisted that Lukashenko stands down first. Tikhanovskaya has said that if she is made president she would immediately return Belarus to the 1994 constitution that contains term limits for the president, release all the political prisoners, of which there are now over 900, according to to human rights NGOs, and quit so fresh elections can be held.

Lukashenko did not set out any time frame for leaving office in his statement on November 28.

As bne IntelliNews reported, the Kremlin appears to be losing its patience with Lukashenko's continued failure to crush the popular protests to his rule that have been running now for more than 100 days, since he massively falsified the result to the presidential election on August 9. Russian presidential spokesman Dmitry Peskov publically condemned the mounting police brutality Lukashenko has been using against protests on November 18 in the first public condemnation of Lukashenko’s response to the demonstrations.

Moscow is "interested" in seeing Lukashenko push forward with “modernising Belarus' political system,” said Lavrov, hinting that early elections could be on the agenda, which are part of the constitution reform package being discussed.

Russia has been negotiating some sort of deal with Lukashenko that includes bringing the standoff with the population to an end. At the same time, Russia wants to see its Union State deal, signed in 1999, brought to a conclusion that would create a “Ruszone” along the lines of the Eurozone and bring the two economies much closer together.

Tikhanovskaya repeated calls for a meeting with Putin. The Coordinating Council has said that it is not opposed to the Union State deal and sees close economic co-operation with Russia as being in Belarus’ best interests.

Indeed the popular presidential candidate Viktor Babariko, who was on course to win the August 9 presidential elections until he was arrested shortly before the vote in July, is pro-Russian and spent 20 years working for Gazprombank. However, Babariko has said that he is first and foremost a Belarusian nationalist and would make Belarus’ sovereign interests the priority in any relationship with Moscow.

The details of the negotiations between Minsk and Moscow have not been released. However, there have been regular visits to Minsk by top ranking Russian officials.

Russian Prime Minister Mikhail Mishustin also flew to Minsk with many members of his Cabinet on September 3 for talks, the content of which was also not revealed.

The UN’s civil aviation agency (ICAO) is not convinced by the Belarusian authorities' explanations
US warns Belarus to keep its commitment to neutrality
Who are the group responsible for last week's hacker attack against Ukrainian websites?