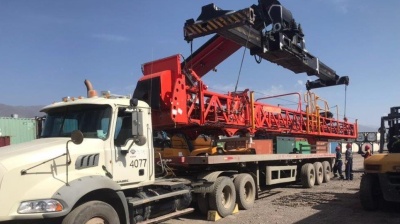 A new drilling rig seen arriving at Kumtor gold mine in August.
By Kanat Shaku in Almaty September 20, 2021

The London Bullion Market Association (LBMA) has suspended its accreditation of state-run Kyrgyz gold refiner Kyrgyzaltyn for failing to meet responsible sourcing standards after several bars of gold from its inventory went missing.

The LBMA offered no further details in its statement announcing the suspension, but the move has likely been made to restrict Kyrgyzaltyn from selling gold bars in gold hubs, including New York and Switzerland, since the main banks that lead precious metals trading tend to only deal with metal from refineries on the LBMA's "good delivery" list.

The LBMA earlier in the year said it had begun a review of the refiner "in response to issues concerning delivery and the potential for fraud".

"With effect from today, 17 September 2021, Kyrgyzaltyn JSC has been suspended from the LBMA Good Delivery List for failing to meet the requirements of the Responsible Sourcing Programme," the LBMA said.

"All production from the refinery will no longer be accepted as Good Delivery from this date," it added.

Kyrgyzaltyn is currently embroiled in a dispute with Canadian miner Centerra Gold following the seizure of the Kumtor gold mine, owned by Centerra, by the Kyrgyz government in May.

The new Kyrgyz president Sadyr Japarov seized power at the end of last year in a sudden revolution and had sweeping powers confirmed by a questionable referendum in April.

Amongst his first moves was the grab the country’s gold mine, which is the main source of foreign excahnge earnings. However, the Japarov administration has also been accused of links with organised crime and is dogged by suspscions of deep corruption. The LBMA scandal is only the latest in a string of questionable decisiosn made by the administration.

Centerra has since accused Kyrgyzaltyn--which also stands as Centerra’s largest (though not majority) shareholder—of involvement in the mine’s seizure and has claimed that the firm tried to make fraudulent payments. Kyrgyzaltyn has denied any wrongdoing.

Centerra had said in June it welcomed the LBMA's decision to "investigate Kyrgyzaltyn's attempted fraud and appreciate the association's commitment to treat this case as a high priority".

The loss of accreditation will restrict Kyrgyzaltyn's access to the mainstream market because major banks which dominate precious metals trading tend to handle only metal from refineries on the LBMA's "good delivery" list, Reuters reported.

On the Kyrgyz side, the authorities under the Japarov administration have been conducting an investigation. The probe resulted in Kyrgyzstan’s State Committee for National Security (UKMK) detaining multiple officials, including several former prime ministers.

In the latest round of developments, the UKMK said on September 17 that it had added several ex-leading executives of Centerra Gold and Kumtor gold mine operator Kumtor Gold Company to its wanted list as the authorities continued to widen their probe into alleged corruption during the development of the flagship gold-mining project.

The UKMK said the investigation has so far showed that the Canadian company’s former leaders and the Kumtor operator had been involved in "corrupt" activities which allowed them to illegally pocket up to $200mn in December 2013.

All past and former executives of Kumtor Gold, Centerra Gold and Kumtor Operating Company have consistently and strenuously denied any wrongdoing since Bishkek seized the mine.