Siarhei Dyleuski, who leads the striking workers at the Minsk Tractor Works (MTZ) and is a member of the Coordination Council, was arrested as part of Lukashenko's crackdown / wiki
By Ben Aris in Berlin August 24, 2020

Leading members of Belarus’ Coordinating Council and the strike movements were arrested on August 24 as Belarus' self-appointed President Alexander Lukashenko started to carry out a threat to “crack down” on the opposition.

Riot police detained members of the Belarus Coordinating Council Volha Kavalkova, the co-chairwoman of the Belarusian Christian Democrats and a prominent member of Tikhanovskaya's campaign team, and Siarhei Dyleuski, who leads the striking workers at the Minsk Tractor Works (MTZ), during a meeting with striking workers at the tractor plant. The authorities accused the two opposition leaders of organising a protest without proper permission.

The newly established Coordinating Council was set up on August 14 at former English teacher and nominal victor in Belarus’ presidential election Svetlana Tikhanovskaya’s instigation to broker a peaceful transition of power and facilitate the departure of President Lukashenko. Lukashenko was initially slow to respond to the creation of this rival political body, but on August 20, the Belarus chief prosecutor launched a criminal case against opposition leaders, accusing them of trying to seize power.

The Coordination Council has already selected seven leaders, including Kavalkova and Dyleuski. Nobel Prize-winning Belarusian author Svetlana Aleksievich is the most prominent of the seven, widely recognised as one of the leading moral authorities in contemporary Belarusian society. Coordination Council leader Pavel Latushko is the most senior establishment figure within the emerging leadership of the pro-democracy opposition, having previously served as Minister of Culture and Belarusian Ambassador to France. Latushko enjoys considerable popularity among liberal audiences and is seen as a key voice of the new Belarus. 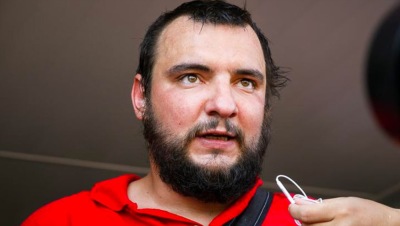 Several other strike leaders have also been detained as Lukashenko mounts an effort to break the general strike that remains the major danger to his rule and could quickly collapse the economy.

After faltering last week the protest movement was reinvigorated following the massive March of the New Belarus demonstration on August 23 that attracted at least quarter of a million participants – a bigger protest than even the 1991 demonstrations when Belarusians demanded their independence from the Soviet Union.

In a video before the demonstrations started Lukashenko openly threatened the population, saying that he would give the people the weekend to “reconsider” their behaviour and would launch a “crackdown” on Monday if they refused to buckle under.

They refused. People streamed into the capital from all over the country to take to the streets in an entirely peaceful protest. The crowds took care to keep their distance from the security forces and riot police for fear of provoking them into action.

Despite the threats the opposition leadership remains defiant. Protest leader Maria Kolesnikova, one of the trio of women that campaigned against Lukashenko in the elections, said the day after the march: “All week tried to scare us, break our resolve... Yesterday showed you can’t rewind things to how things were.”

“We think it is weird that a head of state would run around with strange weapons. If he thinks 80% voted for him, why is he hiding behind barbed wire?” Kolesnikova also called for an investigation into why Lukashenko’s 15-year-old son Nikolai was carrying a gun. Nikolai was filmed in the helicopter that evacuated Lukashenko from the presidential palace clearly wearing a pistol.

But Lukashenko intends simply to brazen it out. Despite the fact that the capital was awash with people and the saturated coverage it got on social media, Belarus’ Ministry of the Interior said in a statement only 20,000 people participated in the March of the New Belarus.

The access to social media has been one of the major driving forces for the uprising: the Nexta Telegram channel that has been a key resource for sharing information and co-ordinating the crowds actions had over 1bn views in August, in a country with a population of 9.5mn.

The Belarusian protestors have garnered support from around the world, with rallies held in another 26 countries to show solidarity on August 23, according to reports, include a 32-km human chain of more than 45,000 people that stretched from the Lithuanian capital of Vilnius to the Belarusian border.

The next day the Belarusian air force announced it had scrambled Mi-24 helicopters to intercept a “probe” into its airspace from Lithuania. The culprit turned out to be two big bunches of red and white balloons carrying the national flag of the same colours that has become a symbol of the uprising. The air force said it had “dealt with” the issue. 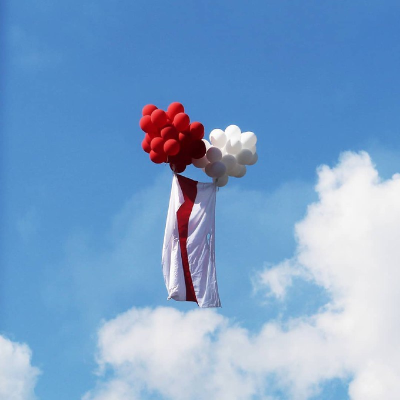 They have also become increasingly creative in expressing their outrage. An artist created a portrait of Lukashenko’s face made entire out of photographs of the injuries protestors had received from the police. 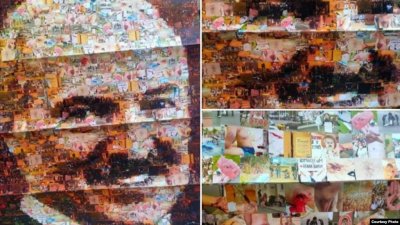 Even the March for a New Belarus was promoted with a slick animation that showed Lukashenko’s head cracking and then covered with red and white flowers in the pattern of the opposition flag. Software developers, artists and professionals from around the world have been aiding the campaign, which boasts extremely high production and graphic art skills.

Russia denies defaulting on $100mn bond coupon payment
5 hours ago
A maze of smuggler tunnels: the Kyrgyzstan-Uzbekistan border
6 hours ago
Ukraine's Zelenskiy calls on the US to recognise Russia as a state sponsor of terrorism
6 hours ago
Amnesty International issues damning report on Lithuania’s migration centres
6 hours ago
At least a dozen killed in shopping mall bombing as Zelenskiy urges G7 leaders to impose more sanctions
7 hours ago