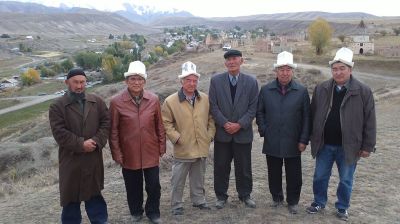 Kyrgyz men in Naryn region. There is substantial unhappiness among locals about Chinese investment.
By bne IntelliNews February 18, 2020

Kyrgyz authorities have reportedly scrapped a Chinese investment project in the eastern part of Kyrgyzstan after mass protests broke out against a planned $275mn logistics centre.

Artur Baiterekov, head of Kyrgyzstan's Naryn Free Economic Zone, was cited by RFE/RL as saying late on February 17 that the deal with China was off. The Kyrgyz-Chinese At-Bashi Free Economic Zone Joint Venture subsequently stated that the investment contract had been rescinded because "it is not possible to work on a long-term large project in circumstances" in which part of the local population opposes the construction of the logistics centre.

Local residents have protested several times since January against the project, with the latest demonstration involving hundreds of protesters occurring on February 17 near the village of At-Bashi in Naryn Region.

Overall distrust of China among Kyrgyz locals has been amplified by worries over how the Chinese might roll out major projects under Beijing’s huge Belt and Road Initiative for modern trade transport corridors as well as by the treatment of ethnic-Kyrgyz minorities—they are among Muslim groups that have been placed en masse in “reeducation camps” in China’s Xinjiang region. The camps are also said to hold thousands of ethnic-Kazakhs and over one million ethnic Uyghurs. Chinese investors have lately faced similar hostility in Kazakhstan to the north of Kyrgyzstan.

The agreement on the Chinese logistics project was reached during Chinese President Xi Jinping's June 2019 visit to Kyrgyzstan. The logistics centre was expected to house a network of production facilities and small businesses that would be granted trade benefits.

The rally’s organisers said over 2,000 people took part in the rally. However, the government’s envoy to the region, Emilbek Alymkulov, said only 700-800 people took part, downplaying the popularity of the demonstration.

"No Kyrgyz Land To China!"

The demonstrators held large banners such as "We Are Against the Logistics Center," and "No Kyrgyz Land To China!"

Last year saw several protests in Kyrgyzstan against Chinese investors. Protests last August led to violent clashes between Chinese workers and Kyrgyz villagers at the Chinese Zhong Ji Mining-operated Solton-Sary gold mine. Dozens were injured. The conflict started brewing in July after locals complained that the Chinese mining firm had contaminated the local environment in a way which led to the mass death of livestock. Authorities said they found no chemicals or high levels of radiation after testing soil samples.

The ex-Soviet state has also found itself in a tense situation with another Chinese gold miner, Full Gold Mining, in 2018 and again in January this year. The investor was confronted by angry Kyrgyz villagers at the Ishtanberdi mines. They staged protests and roadblocks and engaged in illegal “ninja-mining”.

Some 370 workers at the mines subsequently refused to accept amendments to contracts which cut salaries. The workers in the contractual dispute may not have done anything wrong, but the row again highlighted the inability of Chinese companies to enter the Kyrgyz mining sector with any kind of ease and hinted at the wider problem of corruption among officials.