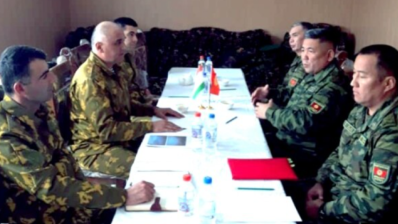 Endless meetings between Kyrgyz and Tajik officials and military representatives over the years have failed to resolve multiple rows over the demarcation of the border. / Official publication.
By bne IntelIiNews October 19, 2022

Bishkek says the move to bring in CSTO (Collective Security Treaty Organisation) soldiers is needed to ensure a ceasefire holds between the two ex-Soviet Central Asian countries. Observers will question whether Russia, embroiled in its war in Ukraine, would have the military capacity and political focus to attend to such troubles in its “backyard”.

At least 100 people in Kyrgyzstan and Tajikistan were killed in September during fighting involving the use of tanks, aircraft and rocket artillery that some observers say amounted to a three-day war. The conflict centred on a section of the border disputed since the fall of the Soviet Union three decades ago but, given how Tajik forces surged a substantial distance into Kyrgyzstan, the Kyrgyz protested that they were subjected to a brief invasion during which homes and schools were burned to the ground.

Kyrgyz Defence Minister Baktybek Bekbolotov was reported by Reuters as telling reporters he has asked the CSTO to deploy a "small" number of troops in disputed border areas. "...There will be no peace until an arbitrator stands between us," he was cited as saying.

Tajikistan's Border Guard Service stated on October 19 that Kyrgyz authorities were implementing "premeditated actions aimed at escalating the situation in districts close to the state border."

"The provocative actions of some Kyrgyz citizens to destabilize the situation, preparation of assault points, digging of trenches, continuation of concentration of military equipment, and regular violations of the air space of the Republic of Tajikistan clearly confirm the Kyrgyz side's malign plans," the statement said.

Kyrgyzstan rejected the Tajik assertions, saying they "absolutely do not correspond to the real situation."

The Kyrgyz State Border Guard Service said in a statement that it was the Tajik authorities who were violating ceasefire agreements by leaving deadly mines on disputed territories and digging trenches there.

Kyrgyzstan and Tajikistan, along with Russia, Belarus, Kazakhstan and Armenia, are CSTO members. Armenia has accused the CSTO of not responding adequately to armed assaults on its territory committed by Azerbaijan. Kyrgyzstan has made it clear that it is disappointed at the defence bloc’s response to its difficulties at the border with Tajikistan. It lately unilaterally cancelled CSTO military exercises that were due to take place in Kyrgyzstan.

Putin has said that there is more "true" information about borders between the former Soviet republics available in the archives in Moscow than in the republics themselves.

Putin and the Kyrgyz and Tajik presidents, Sadyr Japarov and Emomali Rahmon, discussed border problems between the two Central Asian nations on October 13 in the Kazakh capital, Astana, on the sidelines of a summit of the Conference on Interaction and Confidence Building Measures in Asia (CICA).

Almost half of the 970-kilometre Kyrgyz-Tajik border has yet to be demarcated.

Separately, Tajik leader Rahmon has once more expressed concern over security threats Afghanistan poses to Central Asian and other regional neighbours, saying a security belt should be built around Afghanistan. “Thousands of Mujahideen and suicide bombers” were being trained in Afghanistan, Rahmon on October 14 stated at the CICA summit in Astana.

Some analysts see Russia as more concerned for its relations with Tajikistan than with ties to Kyrgyzstan, given that Tajikistan, unlike the latter, has a border with Afghanistan, making its Russian base vital in preventing Afghanistan-based militants and terrorists from spreading northwards towards Russia.

Dushanbe on October 18 hosted a conference on “International and Regional Border Security and Management Cooperation to Counter Terrorism and Prevent the Movement of Terrorists”.

In a speech at the conference, Rahmon reiterated his concerns about the growing insecurity, re-emergence of terrorist organisations, and the enablement of terrorism in Afghanistan. He again called for a security belt.

Rahmon asserted that terrorists from the Middle East have been transported to Afghanistan and that Central Asia was threatened by the expanding presence of terrorist organisations in Afghanistan.

On October 19, UrduPoint News reported Tajik Interior Minister Ramazon Rahimzoda as saying at the security conference that terrorist groups from the east and south of Afghanistan have been re-deploying to the north of the country, closer to the border with Tajikistan.

According to Rahimzoda, there were now more than 20 terrorist organisations in Afghanistan, which include citizens of many states, while there were splits in the country’s ruling Taliban regime that undermined security pledges they gave to neighbouring countries.

Rahimzoda said that after the Taliban took over Kabul in August last year, groups of the Tajik, Uzbek and Hazaras ethnic minorities were subjected to ethnic cleansing.

The Taliban came to power after the collapse of the US-backed civilian government . The Afghan population faces deepening economic, humanitarian and security crises.