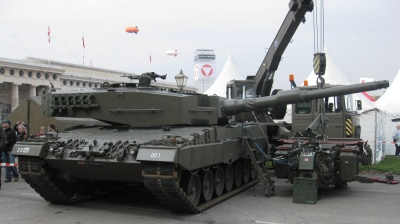 It seems that Ukrainian President Volodymyr Zelenskiy, a former comedian, has not lost his sense of humour. Amidst the current debate on if Europe, and Germany in particular, should send tanks to Ukraine, the Ministry of Defence has released a light-hearted promotional video suggesting a solution: reclassify them as “recreational vehicles.”

The video gently chides Germany, which has been very reluctant to send its modern main battle tank the Leopard to Ukraine for fear of provoking a full-scale war between Russia and Nato.

Last week German Chancellor Olaf Scholz said that Berlin has no plans to send tanks to the conflict this year. This week Polish President Andrzej Duda said that Poland would supply some of its 250 Leopards to Kyiv during a summit held in Lviv, but Warsaw needs Berlin’s permission to do so, which is unlikely to be forthcoming.

Kyiv has also requested heavier vehicles such as the Leopards, which could be a game-changer in battles like that raging in Bakhmut at the moment.

Those calls have not been met, although the West is sending heavier armoured vehicles, but is stopping short of sending main battle tanks.

However, the UK has said it would send British-made Challenger 2 tanks, which if delivered, would be the first delivery of a western main battle tank to Ukraine.

Under increasing pressure to supply Ukraine with tanks, Scholz said on January 11 that Germany may send tanks, but needed to co-ordinate its actions with the US.

Scholz is under increasing pressure to act, but counters that Germany will “not go it alone” nor take any blame for provoking a wider conflict. Scholz said that any decision on sending Leopards to Ukraine must be done in co-ordination with the White House.

"Germany will always remain united with its friends and allies ... Anything else would be irresponsible in such a dangerous situation,” he said this week at an election campaign event.