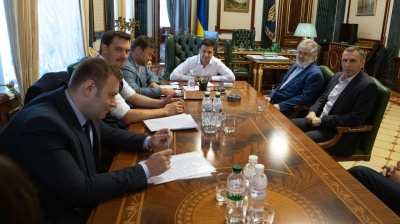 Ukraine's state has been captured by the oligarchs.
By Ben Aris in Berlin November 28, 2019

The assault by paid-for protests on the National Bank of Ukraine (NBU) this week is more than worrying. It highlights the fact that Ukraine is a state that has been captured by the oligarchs.

This is a problem across the whole region. Ukraine's political plurality, the people’s propensity to protest and the population's power to oust presidents – Ukraine has done it twice now – is not sufficient to curb the greed and raw power of the oligarchs.

The NBU issued its strongest statement yet on November 26 accusing oligarch Ihor Kolomoisky of launching a coordinated campaign of terror, intimidation and physical attacks on both the bank’s staff and its independence.

This followed on from a previous statement in September after former NBU governor Valeriya Gontareva’s house was burnt down in an arson attack on September 16. On that occasion the NBU branded those attacks on its staff and Gontareva a “terror” campaign but it was left to Gontareva to accuse Kolomoisky by name.

Kolomoisky is not in full control as Ukrainian President Volodymyr Zelenskiy finds himself between a rock and hard place. On the one hand he is beholden to Kolomoisky who provided money and media support for his landslide electoral victory in April. On the other hand Ukraine needs the support of the International Monetary Fund (IMF) and a new Extended Fund Facility (EFF) worth about $5bn to get through the next few years and the IMF is insisting he curb Kolomoisky’s attempts to regain control over the nationalised PrivatBank.

Kolomoisky has made several very controversial statements. He has suggested defaulting on the IMF debt and making peace with Russia. The IMF for its part has upped the ante and is now not only calling for assurances that Kolomoisky will not get PrivatBank back, but also that the government make a sincere attempt to recover some $15bn stolen by bankers, including the $7.6bn Kolomoisky looted from PrivatBank. In the meantime not only has the government done nothing to recover this money, Kolomoisky remains at liberty, is not under investigation and is openly interfering in politics and violently attacking the NBU and its staff with impunity.

There are many precedents in the Commonwealth of Independent States (CIS). One example is Moldova, where oligarch Vlad Plahotnuic for a long time was the effective political force in the country, having captured most of its institutions. Plahotniuc is a classic eastern European oligarch. He never rose to any post higher than deputy speaker of parliament, but controlled successive governments.

When his ruling coalition lost power earlier this year he fled the country, but earlier this month the Moldovan parliament passed the no-confidence motion filed by the Socialist Party (PSRM) against the cabinet of Prime Minister Maia Sandu, who had announced a policy of "de-oligarchisation". The fall of the government opened the way for the Democratic Party (PDM) previously headed by Plahotnuic to return to power; the party helped oust Sandu and has given conditional support to the new government. Right on cue the new Prime Minister Ion Chicu suggested this week that Moldova could “take a break” in its collaboration with the IMF if the fund “does not show flexibility”.

A similar story is playing out in Georgia which has been wracked by protests in the last week after the government reneged on a promise to introduce some of the most radical democratic reforms in the region, including a change to proportional representation in elections and a zero threshold for political parties to enter parliament that would have led to the most diversified parliament in the former Soviet region. But like in Moldova the force behind the throne is an oligarch, Bidzina Ivanishvili, who made his fortune in Russia and, while his short stint as prime minister is over, still runs the show.

Ukraine has known almost nothing but oligarchs in power. After the post-Soviet president Leonid Kuchma was ousted during the Orange revolution Ukraine had a brief moment of optimism after Viktor Yushchenko took over. But Yushchenko squandered his chance and notably did deals with the incumbent oligarchs in order to get things done. Part of Yushchenko’s problem was his main political partner was former prime minister and head of Batkivshchyna (Fatherland) party Yulia Tymoshenko, who, despite her veneer of liberalism is herself an oligarch, worth a reported $350mn from her time as minister of gas.

The next president was Viktor Yanukovych, who was beyond oligarch and ran a true “mafia state” that was fully focused on enriching the president and his cronies. Former president Petro Poroshenko then took over, but he is another oligarch and despite repeated election promises to put his businesses in trust never did, as bne IntelliNews reported at the time in a story “Poroshenko’s empire”.

The problem that Ukraine’s oligarchs face is that there are several of them. Politics is a battle between the oligarch clans for supremacy and access to the rent-paying state assets. They also have to deal with the weak curbs of institutions like the IMF and also Ukraine’s vibrant civil society, which remains one of the few really effective checks on the oligarchs' ability to operate with impunity.

The irony is that the current set up in Ukraine of competition between oligarchic power centres was going to be Russia’s fate until President Vladimir Putin took over. Putin was hand picked for his job by the so-called Family fraction that was run by Yeltsin’s daughter Tatiana Yumasheva and oligarch Roman Abramovich. When Putin came to power in 2000 seven oligarchs had divided up the country and were competing for power and access to state assets, with Boris Berezovsky being the most visible. The first thing Putin did was to drive Berezovsky into exile and then at his famous “oligarch meeting” he essentially smashed the system and took direct control of the country.

Since then obviously the pendulum has swung too far the other way, but at least the state is in charge not the oligarchs. Russia is also a captured state, but the difference from all the other CIS countries is that Putin has replaced the independent oligarchs with his own homemade stoligarchs. Putin, like everyone else, has accepted that corruption is the system, but his innovation is to control that process himself, and do so completely.

Of all the former communist states, the only ones that went down the other route of building robust institutions to control the country are those that joined the EU – and even in those states, like Poland and Hungary, there has been a lot of backsliding recently.

For Zelenskiy, breaking the oligarchs’ power is going to be even more difficult than it was for Putin as they have had an extra two decades to entrench themselves, whereas Putin was taking on oligarchs that had only really begun to become super rich following the 1996 loans-for-share “privatisations”. So far the only “oligarch meeting” that Zelenskiy has had was one where he invited only Kolomoisky to his office for an amicable chat about “business”.

Zelenskiy was swept to power in the hope that he would do something similar to Putin, break the power of the oligarchs and do something about the endemic corruption. What he is offering – and it's the same offer in almost all these countries – is a hybrid model. All the CIS countries have become more democratic over the last three decades – and Ukraine and Georgia stand out here – as the populations begin to mature politically, so the leaders need to genuinely win votes in elections if they are going to have any legitimacy. But at the same time, as none of these countries have set up functioning institutions nor established a working judiciary based on strong property rights and the rule of law, they are run on the basis of raw power. As bne IntelliNews has argued elsewhere, that means corruption is the system. And the oligarchs are the source of a great deal of money. Their wealth buys them real power.

Zelenskiy is following many other leaders in the CIS. Unlike most he enthusiastically introduced a hectic legislative programme on the first day of taking over. In this sense Zelenskiy is attempting a deeper and more radical reform than any leader, bar Georgia’s Mikheil Saakashvili, has attempted before. But on the other he doesn't want to, or is incapable of, breaking up the oligarchic system. Putin could take on the oligarchs as thanks to his security services background he had the power of the security services at his back to threaten the oligarchs. Zelenskiy on the other hand was a comedian and has no independent power base to work with and no money of his own.