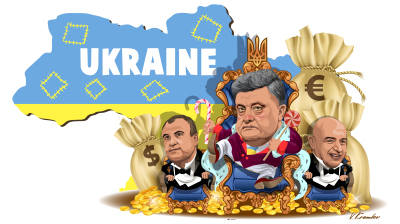 Ukrainian President Petro Poroshenko's political position has weakened dramatically over the last year with a recent poll finding that he has only a 2% popularity rating.

And it is not only Poroshenko that has a low approval rating: all of Ukraine’s top politicians have “very favourable” ratings in single digits, which opens up an opportunity for the Kremlin to have a disproportional influence in the upcoming 2019 presidential elections if it chooses to interfere.

An opinion poll taken by the Sophia opinion research centre found that all the current administration leaders scored woefully low: Poroshenko’s popularity was around 2.0%, Prime Minister Vladimir Groysman’s ranking was 1.7%, and parliament speaker Andrey Parubiy’s was 1.2%.

The low ratings have opened Poroshenko up to attack and former Rada deputies were calling for him to step down on September 4, suggesting if he doesn't go the parliament should impeach him.

"The demand for impeachment is a demand on the part of the entire nation," Vladimir Oleinik, a former deputy of the Verkhovna Rada national parliament told Russian state-owned TASS news agency. "That’s a verdict issued by the whole of Ukrainian society because people are unable to tolerate this kind of power anymore."

The fact that Tass is reporting this story is in itself a problem for Poroshenko as Russia is expected to interfere in the upcoming 2019 presidential elections and clearly it will support pro-Russia and anti-Poroshenko elements. Russia still has the ear of the population in the east of the country, where people would rather see Ukraine join the Eurasian Economic Union (EEU) than the European Union (EU), according to a recent poll by GfK. The situation is exactly the opposite in the west of the country.

Aside from Russia’s machinations, Poroshenko is genuinely unpopular. The GfK poll showed that both the president and his eponymous party is trailing behind opposition firebrand Yulia Tymoshenko and if elections were held this Sunday it is unlikely that Poroshenko’s party would even clear the 5% threshold to enter the Rada. Tymoshenko, a former prime minister, has come back from the political dead and would win both the parliamentary and presidential elections if they were held this weekend, the poll finds.

However, with only 11% of support in the poll for Tymoshenko and 10% for her party Batkivshchyna (Fatherland) party she also remains deeply unpopular. The real take-out from the poll is Ukrainians distrust all their leaders and voting in the election, as it stands at the moment, will be a choice of the least-worst politician. Those that said they won’t vote at all in parliamentary elections is nearly double Tymoshenko’s score at 19%, and another 29% don’t know what they would do.

The poll found that those that said they had a “very favourable” view of any of the political names were in single digits for all the names on the list, whereas those with a “very unfavourable” view were in the 40%-50% for almost all the candidates – more in many cases. Only 6% had a very favourable view of Tymoshenko (the highest any politician scored) while 44% had a very unfavourable view of her. For Poroshenko the same numbers are even worse with 2% and 47% respectively. All in all the poll found the government has a circa 80% disapproval rating. 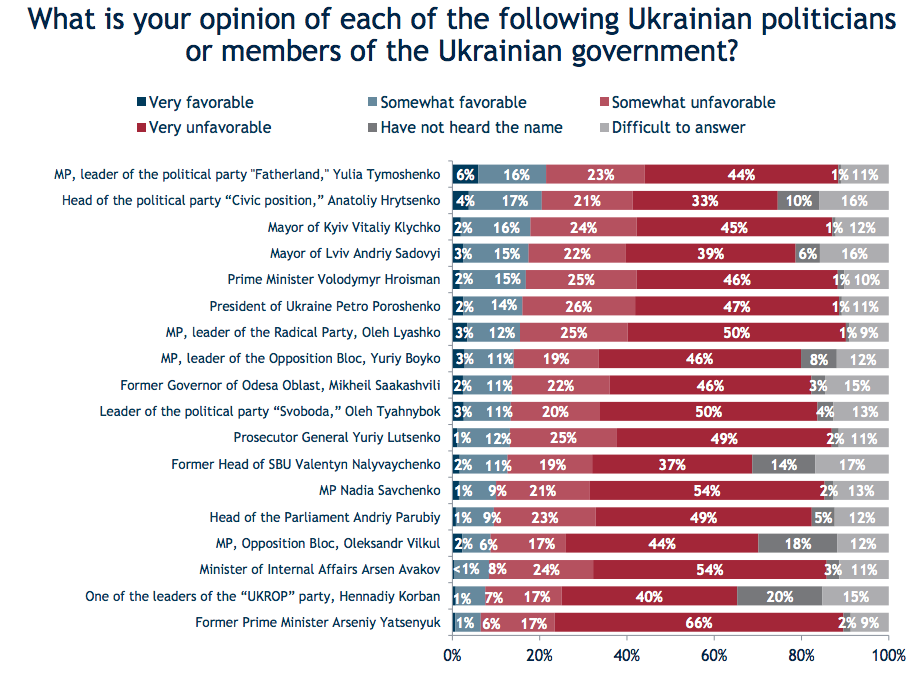 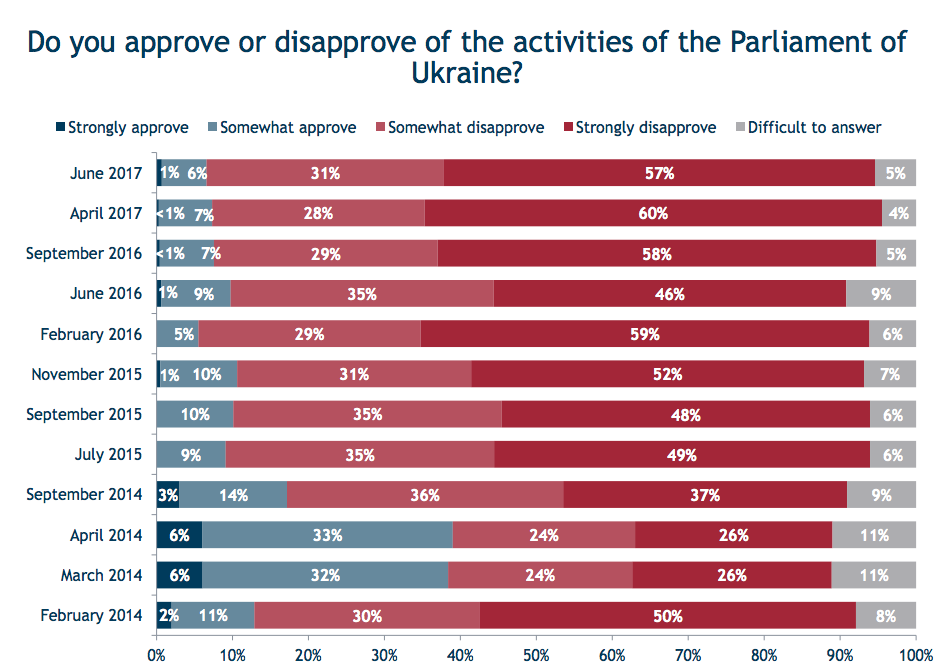 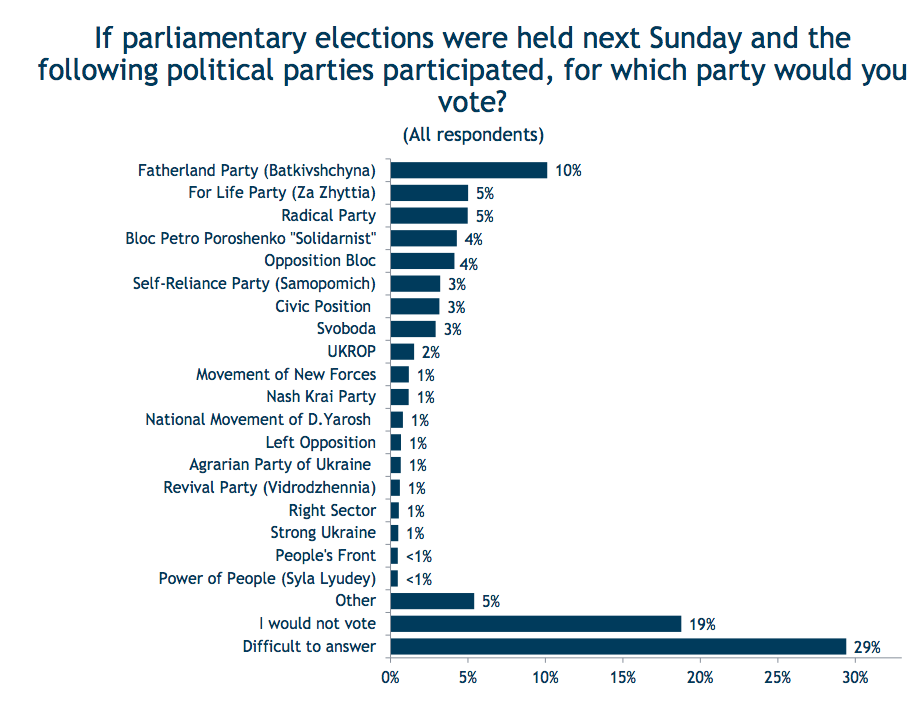 All this creates an opportunity for the Kremlin to undermine the elections and possibly oust Poroshenko for a new and friendlier leader. While Russia has seen its popularity sink since the annexation of the Crimea in 2014, and more than half of Ukrainians (51%) see Russia in an unfavourable light, attitudes vary shapely across the country. Russia is almost universally unpopular in the nationalistic west of Ukraine and only mildly unpopular in the Russophile east.

Bottom line is the poll also found that Ukrainians are a lot more concerned with corruption and unemployment than they are with the fight with Russia. To underscore the point Russia last week simplified the process of getting a Russian passport for Russian-speaking Ukrainians and the Ministry of Interior reports that there are 600,000 Ukrainians currently waiting for a passport. Kyiv called the move a provocation and reminded its citizens that they need a decree signed by the president to terminate their Ukrainian citizenship. The Russians have said they will not permit dual-citizenship.

The passport issue is an emotive and dangerous one. Russia used passports to prepare the annexation of South Ossetia by handing them out freely to anyone who asked, despite the fact that the region belonged to Georgia at the time. In the Crimea too, it has been reported that about half the population hold both Russian and Ukrainian passports. The Russian constitution demands that the administration “protect” its citizens wherever they are and as a result passports are a very convenient method of low watt invasion of a territory.

None of this will alleviate Poroshenko’s very real challenge, as regardless of the Kremlin’s shenanigans he has to do something about his poll numbers before the elections. He will struggle to remain in office in the upcoming elections without either delivering some real results and/or making heavy use of “administrative resources” in the upcoming elections. And the backsliding on recent IMF reform demands, like postponing land reform and dragging his heels on setting up an independent anti-corruption court, suggest that Poroshenko is already in campaign mode and intends to rely more on administrative resources than results.