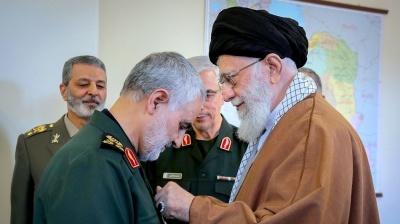 Iran will strike a reciprocal blow against the US for its killing of top Islamic Revolutionary Guard Corps (IRGC) commander Qasem Soleimani, Iranian Supreme Leader Ayatollah Ali Khamenei said on July 21 in a meeting with Iraqi Prime Minister Mustafa al-Kadhimi, according to Khamenei’s official website.

Soleimani, the de facto head of Iran’s armed forces and second most powerful official in the country behind Khamenei, was assassinated in early January on the orders of US President Donald Trump, who gave the go-ahead for a drone strike at Baghdad airport. He was the head of the IRGC’s expeditionary Quds Force and for years was seen as the mastermind of Iran’s military and political successes across Middle East conflict zones. Washington had accused Soleimani of orchestrating attacks by Iran-aligned militias on US forces in the region, but the assassination has been condemned in many quarters as in breach of international law.

Also on July 20, Iranian President Hassan Rouhani welcomed Iraqi Prime Minister Mustafa al-Kadhimi as he paid a visit to Tehran. Kadhimi at a press conference referred to Iraq’s concern that it does not become a battlefield between Iran and the US.

“The people of Iraq want good relations with the Islamic Republic of Iran based on the principle of non-interference in the internal affairs of both countries,” he said at the press call, broadcast live by Iranian state television.

The Iraqi premier faces a tough balancing act between Tehran and Washington. At home, he faces rising pressure from Iran-aligned parties and paramilitary groups who perceive him as siding with the US because he has indicated he wants to curb the power of Iranian-backed militias and political groups, Reuters reported.

At a later meeting with Kadhimi, Khamenei praised the Popular Mobilisation Forces, an Iraqi state-controlled institution that is an umbrella grouping of militias, many backed by Iran. Khamenei also said Iran would not interfere in relations between Iraq and the US.

Kadhimi added that Iraq was a country “that won’t allow any aggression or challenge to Iran from its territory”.

Iranian Foreign Minister Mohammad Javad Zarif visited Baghdad on July 19. He made a stop at the site where Soleimani and Iraq paramilitary chief Abu Mahdi al-Muhandis were assassinated.

The Japanese government and the United Nations Industrial Development Organization (UNIDO) have signed a funding agreement for a project to promote the sustainable development of the tuna value chain ... more

Iran is assessing a European Union proposal for an informal meeting between current members of the 2015 nuclear deal and the US, but has yet to respond to it, Iranian Deputy Foreign Minister Abbas ... more