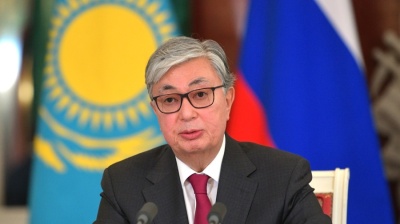 Kazakhstan's President Kassym-Jomart Tokayev on September 1 announced plans to call an early presidential election to take place in the autumn. Tokayev is looking to secure a second term amid his ongoing attempts to reset the nation following the shocking eruption of bloody civil unrest that shook the country and left hundreds dead at the beginning of the year.

Tokayev, who at one point during the unrest looked vulnerable to a coup and invited in Russian troops to help quell the turbulence, informed the Kazakh parliament of his intentions in his annual address.

The president also proposed holding a snap parliamentary election in early 2023 and introducing a seven-year presidential term to replace the current five year-term. Under the change, future presidents would be barred from seeking more than a single term. Tokayev’s move comes following the constitutional referendum held in Kazakhstan earlier this year, which was widely seen as an attempt by the president to gauge the level of backing he holds across the country following January’s civil unrest—which has been followed by outbreaks of industrial unrest—and moves to stamp his own imprint on a country that was ruled by Nursultan Nazarbayev for three decades after the demise of the Soviet Union. His desire to seek re-election ahead of 2024, when he was originally due to stand for another term of office, may imply he has confidence in the level of support he might receive, but also caution over potential difficulties in the upcoming years.

"I propose that we hold early presidential elections in the autumn of 2022," Tokayev told parliament, noting measures were needed to "strengthen our statehood" and "maintain the momentum of reforms."

The early presidential election looks set to be held amid a continuing war in Ukraine. Tokayev may be attempting to secure his power, while reassuring himself that he still has the backing and not the hostility of Russia, which yields much influence over Central Asian politics. Kazakhstan's lack of endorsement for Russia's invasion of Ukraine has led to some disquiet in Russia, particularly among nationalist Russians who believe Moscow has a claim to northern territories of Kazakhstan, where millions of ethnic Russians live.

After Tokayev's address, the Kremlin released a statement, saying: "Russian President Vladimir Putin held a phone conversation with Kazakh President Kassym-Jomart Tokayev. Issues related to today's speech by Kassym-Jomart Tokayev with a message to the people of Kazakhstan were raised. Vladimir Putin expressed his wishes for success in implementing the major goals outlined in this message."

Putin's spokesman separately told reporters: "We want to see the future of our bilateral relations and the future of Kazakhstan itself only as the most brilliant future."

There is some speculation among analysts that the Kremlin has been squeezing Kazakhstan’s oil imports at the Russian Black Sea oil export terminal in Novorossijsk in order to underline to Nur-Sultan how its fortunes are somewhat tied to loyalty to Russia.

As part of his address, Tokayev outlined a number of populist moves, including an amnesty for many of those who participated in January’s unrest and were subsequently arrested.

"The amnesty will not affect the main suspects accused of organising the unrest, as well as those charged with high treason and attempting to seize power," Tokayev said.

Tokayev also suggested introducing a luxury tax that would not affect the middle class and would be levied on the purchase of expensive real estate and vehicles.

"As part of the tax reform, it is important to consider the possibility of introducing the luxury tax," he said.

At the same time, Tokayev also called for a new economic course away from excessive state interference.

"Administrative price regulation reduces the investment attractiveness of entire industries, leads to a shortage of goods and dependence on imports. It is necessary to gradually reduce state intervention in pricing. The exception will be non-competitive markets, and the tariffs of monopolists will remain under tight control. But control does not mean pressure at all," Tokaev said.

“The next issue is strengthening the country’s transit potential. In the current geopolitical context Kazakhstan is the fundamental land bridge between Asia and Europe. We should take advantage of this opportunity in full to become the world’s transport and transit hub,” he said.

As part of these plans “Kazakhstan Temir Zholy Company will be reorganised as a full-featured transit and logistics corporation,” he added.

Kazakhstan has seen its role in international transit grow substantially amid sanctions on Russia and the war in Ukraine.