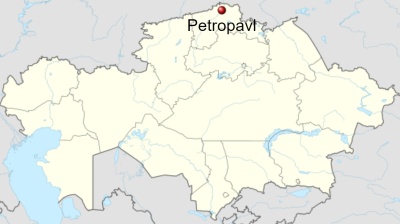 Russian nationalists have long claimed Northern Kazakhstan, the capital of which is Petropavl, should be part of Russia. / NordNordWest, Lizenz:Creative Commons by-sa-3.0 de
By bne IntelIiNews July 26, 2022

Kazakhstan has significantly boosted its defence spending while seeking to strengthen ties with China and Nato nations amid anxieties that Moscow could expand its geopolitical ambitions beyond Ukraine, The Wall Street Journal (WSJ) has reported, citing a Kazakh official.

The ex-Soviet state is committing an additional Kazakhstani tenge (KZT) 441bn ($918mn) to its defence budget, marking a nearly 1.5-fold rise from last year’s budget of $1.7bn, the newspaper reported. Part of the money would go to increasing Kazakhstan’s military reserves, according to a the quoted senior official, who added that Kazakhstan has learned lessons from Ukraine’s fierce resistance to the Russian invasion of the country that began in late February. The army must be reformed to make it more mobile and skilled at combatting hybrid warfare that mixes conventional warfare with cyberwarfare, disinformation and election meddling, he was further quoted as saying.

While some in the West say Russia’s military has been exposed as a paper tiger, one senior official from a Central Asian country told the WSJ that fear was only growing over Russia’s ambitions. “It’s one thing when they deal with so many others and they have Eastern Europeans and Ukraine to spend their time abusing,” the official said. “Imagine if they don’t have Ukraine to abuse. Are we going to be next?”

Moscow’s invasion of Ukraine has complicated ties between Russia and arguably its closest ally aside from Belarus. Kazakhs have long feared, even prior to the Ukraine invasion, that Vladimir Putin could attempt to annex northern Kazakhstan, similarly to how Russia grabbed Crimea in Ukraine. Around one-fifth of Kazakh citizens are ethnic Russians, largely residing in northern parts of Kazakhstan. Russian nationalists have long insisted that Kazakhstan’s north is Russian land. In 2014, after Russia annexed Crimea, Putin remarked that Kazakhstan had no history of statehood until the demise of the Soviet Union.

The jitters felt among some Kazakhs as to Russia’s ambitions were brought home on July 26 when bne IntelliNews picked up on rumours that Russia was moving troops to a part of Siberia near Kazakhstan. The chatter appeared to have been triggered by Russian and Chinese troop movements in relation to an International Army Games military drill in Zabaikalsk in Russia's Far East.

The WSJ report explored claims that Kazakhstan has been drawing closer to China, the US and Turkey in recent months, but Nur-Sultan has several times repeated lately that Kazakhstan would take care to fulfil its obligations to Russia as an ally.

When civil unrest broke out across Kazakhstan in January and speculation arose that President Kassym-Zhomart Tokayev could be toppled in an associated coup, Tokayev approved the deployment of around 1,500-2000 Russian troops under a Collective Security Treaty Organisation (CSTO) pact. Their arrival helped to secure the prospects of his administration as the last of the unrest was quelled.

Kazakhstan has refused to take a side in the ongoing Ukraine war, declining to offer any official support to either Ukraine or Russia. Moreover, speaking at the St Petersburg International Economic Forum (SPIEF) alongside Putin in June, Tokayev said the Central Asian nat​​ion would not recognise the self-proclaimed Donetsk and Luhansk Peoples’ Republics as independent states. Putin has called for the “liberation” of the pro-Moscow separatist so-called republics as the main excuse for sending troops into Ukraine.

After the Kazakh leader’s comments, Russia alleged oil spill concerns in announcing that it would halt oil flows in the CPC pipeline, which ships the vast majority of Kazakh oil exports via the Russian port of Novorossiysk. The measure was, however, cancelled after Kazakh authorities announced plans to block sanctions-dodging parallel imports to Russia via Kazakhstan’s customs checkpoints.

After the Ukraine conflict began, Kazakhstan banned anti-war demonstrations that might anger Moscow, but also made it unlawful to publicly display the “Z” sign that has become a pro-war symbol in Russia.

Perspectives | Beijing and Moscow clash over Kazakhstan’s oil
Academic sheds light on Rahmon regime’s attempts to crush the Pamiris
COMMENT: Does Russia have any friends left in Southeast Asia?