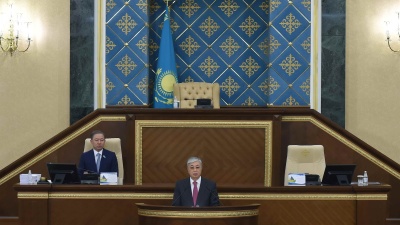 In the address, Tokayev pledged to support political competition and pluralism in the tightly controlled country.

The 66-year-old president called for future elections to pave the way for a “multi-party system” and said authorities must allow citizens to hold peaceful protests and freely express their opinions. The shoo-in election in June that put Tokayev in permanent office, following his short stint as an interim president, was marred by thousands of arrests of peaceful protesters—and even bystanders—around the country. Post-Soviet independent Kazakhstan is yet to experience a truly democratic election. Votes are largely rigged in the ruling elite’s favour.

"If the goals of peaceful actions are not to violate the law and disturb other citizens, then such actions must be allowed to be organised and special places must be defined for such events, which must not be in city suburbs," Tokayev said.

Small-scale protests involving teenagers and young people were held around the country last week after the authorities decided to ease their stance on pro-democracy and anti-regime rallies.

Tokayev noted, however, that "any calls for unconstitutional actions and hooliganism will be prevented in a legal way".

Although the demands of the protesters are unlikely to be met, the rally reflected wider ongoing anti-China sentiments, which have long been seen with ordinary Kazakhs, who regard China as an economically invasive force. These sentiments have been exacerbated by constant news of China’s so called “re-education camps” in Xinjiang, said to hold thousands of ethnic-Kazakh citizens of China. The land reform protests of 2016 were also partly directed at China over frustrations that the Kazakh government is continually handing over land to the big neighbour.

The protesters only agreed to disperse after they were promised that the governor of Mangistau region, Serikbai Turymov, would journey from the regional capital of Aktau to meet with them. Zhanaozen Deputy Mayor Amanghali Nurdauletov tried to speak with the protesters outside the mayor's office, but they demanded to see the governor.

Zhanaozen is known as the town where Kazakh authorities in December 2011 violently suppressed protests by oil workers by having police open fire at a rallying crowd—16 people were shot dead, while possibly hundreds were injured.

Weakening tenge
The Tokayev administration is, meanwhile, keenly aware that the Kazakh tenge may weaken further against the dollar in September as it follows other emerging-market currencies and volatile oil prices. That’s the outlook presented in the conclusions of a poll conducted by Reuters.

The tenge hit new lows in August following the weakening of the Russia ruble, the Chinese yuan and oil prices. Eight of the 10 participants in the poll predicted that the currency would fall further against the greenback in September. One analyst projected the tenge would stand unchanged at 387 to the dollar, while another said it would strengthen.

Tokayev weighs into monetary affairs
Tokayev on September 2 was also busy criticising the central bank’s monetary policy ahead of its interest rate review. Weighing into monetary affairs, he demanded that the national lender ensure affordable long-term credit for local businesses.

Tokayev has previously urged the regulator to make affordable credit a possibility for Kazakh citizens—when he did so it was seen as a populist move to quell the economic and political anxieties of ordinary Kazakhs, who came out in droves to ensure his ascendancy to the permanent presidency was not without turbulence. Under pressure from Tokayev, Kazakhstan’s central bank has kept its policy rate at 9% since cutting it by 25 basis points in March. The president’s latest remarks may well influence the central bank’s decision-making during its policy rate review.

“The insufficient efficiency of monetary policy is becoming one of the impediments to the country’s economic development,” the president told parliament, adding that businesses were struggling to get loans from the banking sector.

On top of that, Tokayev ordered the government to delay the introduction of additional 5% pension contributions until 2023. The extra contributions would effectively function as additional payroll tax—they were originally set to be implemented in 2020. Tokayev argued that the new tax would hinder wage growth and job creation.

"The external situation is not favourable as the [US China] trade war only escalates and emerging-market currencies weaken. Only the pressure on the Fed to cut rates is a positive signal for the tenge," said Aibek Burabayev of ICBC Almaty. "(But) one should bear in mind the readiness of the central bank to use the rate hike weapon—it could be a one-off sharp increase of the rate—in order to protect the local currency."

Nazarbayeva re-nominated
Finally, September 2 saw Tokayev re-nominate Dariga Nazarbayeva, a daughter of his predecessor Nursultan Nazarbayev, who is widely thought to still be exercising key powers in Kazakhstan from behind the scenes, for the Senate speaker position.

Nazarbayeva has served as head of the upper chamber since March, but given that her mandate was renewed in August, the Senate is now required to re-elect her.

Her presence as the Senate speaker constitutionally requires her to take on the responsibilities of the president in the event of him suddenly stepping down, becoming incapacitated or passing away. This fact drives speculation that she will eventually become the “true” successor to Nazarbayev, with Tokayev seen as a temporary figure in the transition plan.

The billionaires club, where the mega-wealthy go to meet each other
Kaspi on the cusp? Assessing the significance of Kazakh fintech firm's smash stock market debut
Why fintech IPO sensation Kaspi is king in Kazakhstan