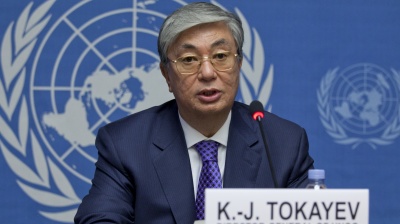 Kasym-Zhomart Tokayev has been sworn in as Kazakh president but he is a Nazarbayev loyalist who is not expected to have any qualms at his predecessor continuing to rule from behind the scenes.
By Nizom Khodjayev in Astana March 20, 2019

Kazakhstan’s legislature on March 20 passed a law to rename Astana as Nursultan in honour of Nursultan Nazarbayev, the president of the country for three decades who announced his resignation this week.

Speaker of the Senate Kasym-Zhomart Tokayev, who will serve as president until after an election is held at the end of 2020, proposed the renaming of the capital city immediately after he was sworn into office on March 20.

The day also saw the promotion of Nazarbayev’s 55-year-old daughter Dariga Nazarbayeva who has become the new Senate speaker. That move will restart speculation that she is line to become Nazarbayev’s true successor, but her father publicly stated in an interview in late 2016 that his children would not succeed him. Some analysts believe that the true successor will not be a single individual, but a ruling group made up of several clans and not overly beholden to a powerful figurehead.

Astana was made the capital of Kazakhstan in 1997, taking the title from Almaty. Nazarbayev decided to redevelop and expand it as a planned city like Brasilia in Brazil and Canberra in Australia. With a population of slightly over 1mn people, it is one of the coldest capitals in the world. It is designed to feel futuristic in many parts. The master plan for Astana was designed by Japanese architect Kisho Kurokawa.

Nazarbayev’s opinion will have “priority”
In an inauguration speech, Tokayev made it clear that he intended to continue to serve Nazarbayev, saying his “opinion will have special, one might say priority, importance in developing and making strategic decisions”.

Tokayev is a 65-year-old career diplomat fluent in Russian, English and Chinese. Russian President Vladimir Putin congratulated him on March 20. He said Tokayev had made a “big personal contribution to the strengthening of the ties of strategic partnership and alliance between our countries”.

Taking on the question of who the more permanent successor to the resigned president will turn out to be, Chris Weafer, senior partner at the Moscow-based Macro-Advisory consultancy, told Reuters: “The real contest will be fought inside the corridors of power rather in public. The candidate supported by the [ruling] Nur Otan party and, presumably, endorsed by Nazarbayev, will win the election. There is no realistic possibility for surprise given the political structures in Kazakhstan.”

Nazarbayev, who turns 79 this year and has been granted the title “Leader of the Nation” for life, is the only president Kazakhs have known in the post-Soviet era. Those who find the idea of a new president difficult to get to grips with will be reassured that he is very clearly going to now serve as the power behind the throne, maintaining his grip on the key levers of power. Nazarbayev retains the posts of security council chair and leader of the Nur Otan party.

Market jitters
The uncertainty generated by the departure of Nazarbayev has caused some market jitters. Kazakhstan’s tenge currency fell 0.6% on March 20. Exchange offices in the country were selling the dollar at KZT380, 1% above the official rate of the tenge as some Kazakhs rushed to buy foreign currency.

The Kazakh government and central bank issued a joint statement saying that there would be no change to Kazakhstan’s economic policies following Nazarbayev’s resignation. They also said that the central bank would prevent any “speculative operations”.

The central bank, in a separate statement, noted that it was not currently intervening on the local currency market but added that it was prepared to supply cash in both tenge and foreign currencies to local banks if it became necessary.

Kazakhstan’s sovereign dollar bonds and the share price of London-listed Kazakh lender Halyk Bank both fell after the unexpected resignation news on March 19.

Some analysts say the transition to a new president who takes full control of the oil-rich nation could delay long-term reforms and make economic policies more populist. Kazakhstan has lately experienced many protests over living standards, with Kazakhs protesting that not enough of the country’s wealth was filtering through to them.

“The question for monetary policy is whether it remains cautious, as premature easing—a cut in the key rate before 3Q19—may add to the risks to the Kazakhstani tenge, which is already facing headwinds due to key oilfield maintenance and potential negative spill-over effects from Russia and China,” Dmitry Dolgin, chief Russia and CIS economist at ING, observed.