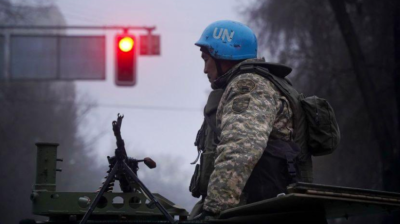 Kazakh and Belarus peacekeeping forces deployed to quell unrest in Kazakhstan have been wearing the blue UN helmets, despite the fact that UN is in no way involved in putting down the protests in the country
By Dominic Culverwell in Berlin January 12, 2022

Kazakh state media caused a stir after it photographs of state security forces wearing blue UN helmets at a checkpoint in Almaty on January 9.

Last week Kazakh President Kassym-Jomart Tokayev called in Collective Security Treaty Organisation (CSTO) peacekeepers from Russia and the other member states to quell violent protests that threatened to topple the government, and blamed international terrorist groups. However, this was not a UN operation nor was the UN approached for help, raising the question of why are the Kazakh troops wearing the trademark UN blue helmets?

Experts quickly pointed out that the soldiers were part of KAZBAT, a peacekeeping military unit in Kazakhstan’s army trained to United Nations standards. However, despite their training, KAZBAT is not authorised to wear UN insignia unless they are on an official UN peacekeeping mission.

A UN spokesperson told Germany’s Bild newspaper: "United Nations troops and police stations may only use the UN badges if they are performing their mandated tasks within the framework of a United Nations peacekeeping operation mandated by the UN Security Council."

Alongside the CSTO peacekeeping forces headed by Moscow, KAZBAT soldiers were deployed to quell last week’s demonstrations caused by a sharp fuel price increase. Disenfranchised citizens organised strikes and street protests, and even stormed government buildings. More than 10,000 people were arrested and over a dozen were killed, according to the authorities during the unrest.

In response to online criticism, the Permanent Mission of Kazakhstan to the United Nations released a statement that “measures were taken to prevent the use of any equipment bearing the UN inscription” but the mission failed to explain why the helmets were being used. 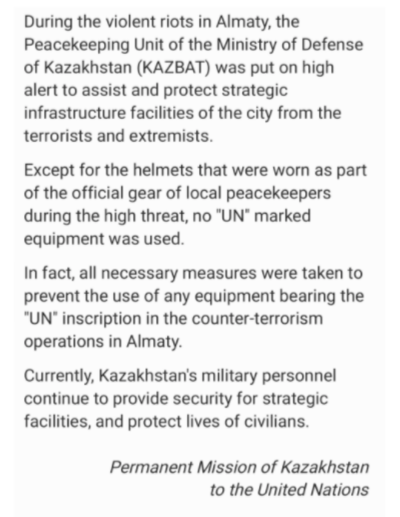 And the KAZBAT troops were not alone in using UN emblems. The Belarusian Ministry of Defence published photos showing soldiers of the CSTO mission deployed to Kazakhstan, in Belarus’ first ever foreign mission since the fall of the Soviet Union, wearing UN patches on their sleeves. Following public outcry, the United Nations expressed “concern” over the unauthorised use of its trademark symbols.

The reason for publishing these photos is not clear. However, they may be intended to add legitimacy to President Tokayev’s and Russian President Vladimir Putin’s dubious narrative that Kazakhstan is under attack from international terrorism, and to justify the government's heavy-handed response.

An estimated 164 people were killed in the protests, with Tokayev blaming the violence on some “20,000 terrorists”, but the government has been unable to produce any evidence to support this claim as all the bodies of those killed have been stolen, the government asserts.

“[The terrorists] cunningly broke into the morgue and stole the bodies of the dead comrades, so there may be no evidence”, the Kazakh president said on state TV on January 10 in a bizarre address.

Videos allegedly showing armed militia groups and foreign protesters-for-hire have also been debunked or doubted by experts. Even the reports of protesters killing security forces conflict with one other. Disinformation plagues Kazakhstan, as the state retains total control over the information flow and most of the independent media outlets are currently shut down. 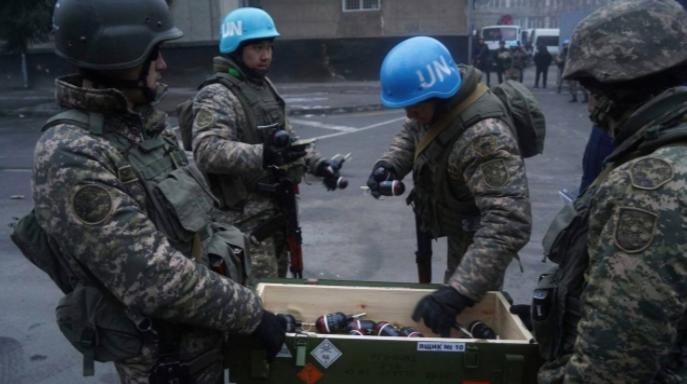 Who are the protesters?

If the protests are not being organised by international terrorists then who, if anyone, is behind the unrest?

The first demonstrations appeared in the western Mangystau region on January 1 after a reform saw fuel prices double overnight and protesters were entirely comprised of disgruntled workers.

Despite the efforts of local authorities to meet demonstrators’ demands, the protests quickly spread across the country and morphed into a more general anti-government protest, fuelled by the frustration of poor, malcontent working-class citizens, tired of the country’s corruption and autocracy.

After thirty years of autocratic rule under the former Kazakh president Nursultan Nazarbayev, the Kazakh opposition movement has been effectively crushed and plays little role in the country. What unrest there has been is largely driven by socio-economic issues and is largely spontaneous.

And during the crises of the last year life has become much harder. Inflation rose to 8.9% in 2021, up from 7.5% in 2020, and as food prices have soared, which make up a much larger share of the poor’s shopping basket, this inflation has disproportionately hurt those at the bottom of the social pyramid. Many Kazakhs have been forced to borrow to make ends meet and the population's debt load increased in 2020 by 12.3%, according to a report by the US think-tank Carnegie Endowment for International Peace in Moscow.

Moreover, thanks in part to the pandemic and little financial support from the government, unemployment rose by 12% last year, particularly affecting young, male, internal migrants from poorer regions. On top of all that, the cost of living in Kazakhstan’s remote western regions is higher than in the more populated south-eastern regions as the price of most of the consumer goods is driven up by the high cost of transport, making Mangystau more prone to protests than the rest of the country.

Kazakhstan’s largest city, Almaty, quickly became the epicentre of last week’s violence. bne IntelliNews’ correspondent in Almaty reports that the most active centre of protests was in the working-class districts in the southern part of the city. Tensions have also been fuelled by rising youth unemployment after the population nearly doubled in the last 20 years, partly due to the number of internal migrants seeking work. Almaty’s crime rate has risen alongside the population growth, with registered crimes quadrupling between 2007-2017, according to Carnegie.

Although most of the city’s protesters were peaceful, there were reports of fights between security forces and the crowds. With so many young, frustrated men, the radical escalation of the protests was likely down to “the sheer number of angry young men with little to lose”, rather than any foreign influence, Carnegie reports.

A government investigation is underway to determine the cause of the riots, the results of which will no doubt be in their favour. In the meantime, Tokayev promises a “reform plan” and solutions to the country’s “social and economic problems”. However, the outcome of the protests will likely be further persecution and restrictions. In addition to the “terrorists”, Tokayev has his sights set on “human rights defenders”, “activists”, and the “so-called free media”, all of whom he calls “instigators” in the protests.