Moscow is home to much of Russia's wealth and has always been treated as a country and an investment destination in its own right. But over the last decade a handful of regions have got their act together and now are emerging as even more attractive to investors than the capital. Kaluga has a good claim on the title of "Russia's best region."

Located some 400 kilometres south of Moscow, Kaluga didn't have much going for it other than some fairly large military-industrial facilities following the fall of the Soviet Union and appeared mired in a middle rank of economic misery with the bulk of the country. However, Anatoly Artamonov, the Kaluga Oblast's energetic governor, has lifted the region up by its bootstraps, following a no-nonsense policy to bring in investment and improve the lives of the residents. "We didn't concentrate on success - we simply determined a path for development and followed it," says Artamonov in an exclusive interview with bne. "The region produced weapons and lots of unemployment. We understood that if the people were unemployed, then this would lead to a collapse and no money in the budget."

Artamonov should be more famous than he is, as he is clearly one of Russia's most capable administrators. Kaluga has risen from 48th place in terms foreign investment per capita in 2005 to being among the top few in the last three years. And Kaluga twice topped the tables in terms of industrial production per capita for the whole country, with annual growth of 145% in 2010 and 125% in 2011. "In the last few years, official unemployment has been one of the lowest in Russia; Kaluga is one of the regions of Russia where the number of jobs significantly exceeds the number of people willing to work," says Artamonov, who has been governor of the region since 2000.

In short, the region is flourishing. International car producers were the first major investors to move in, but recent years have seen the arrival of companies from the pharmaceutical, food processing, high-tech and fast-moving consumer goods sectors.

Kaluga is not an isolated case. With nearly a decade and half of strong growth in the bag and incomes that have expanded some 16-fold since the era of Boris Yeltsin, today that are some 28 regions with attractive investment climates out of a total of 83, according to a rating issued by Business Pulse in October. (Another 26 are deemed 'neutral' and 21 'negative'.)

Geography has played a role in Kaluga's success. Moscow is only 400km away to the north, providing a market the size of most countries in Central and Eastern Europe. But Artamonov complains that the capital is also a disadvantage, as it sucks out resources from Kaluga, especially well-qualified people, by offering better salaries.

So what is Artamonov doing right? After taking office, Artamonov did what most progressive governors do: he went on a world tour to see how success is achieved elsewhere, visiting other prosperous emerging markets to learn from their experiences, including China and South Korea, as well as more developed markets like Germany, Sweden and Finland. On his return, Artamonov set out a list of priorities. "We needed to invite investors to industry, as we need technology and new facilities. We also asked our Russian investors why they were not coming to our region. They said it was a combination of heavy bureaucracy, corruption, lack of infrastructure (especially the difficulty of getting power), high taxes and inefficiencies in the labour force," Artamonov tells bne at the region's Moscow residence.

That list closely tallies with the worst results Russia scored in the factors that make up the World Bank's "Doing Business" ranking. So Artamonov's solution was to implement a liberal list of policies to make life easier for investors, including the building of industrial parks.

The bureaucrats in Kaluga's Moscow mansion joke that the building has the feel of a museum due to the constant stream of visitors, comprising potential investors but also increasingly apparatchiks from other regions curious to find out how Kaluga works its magic. Artamanov's programme has become a textbook case on how to develop a regional economy. "We invited investors to our territory and showed them there was no bureaucracy as everything was already built. They received all the permissions they needed from a 'single window' and we set up a consultancy [run by the administration] to liaise with the investors to deal with their problems," says Artamonov.

As for corruption, for which Russia is notorious: "In the last 15 years I have never heard one complaint about corruption in my region."

How so? Artamonov's solution was to put all supply contracts, permissions and tenders out in the open. All investors' deals go through a regional committee and are done in public. It sounds simple, but it's the devilish details that are the make or break of anti-graft measures.

And there is Artamonov's fail safe: he is famous for handing out his mobile phone number to any and all investors. If a company has a problem it can't solve on its own (aka the shakedown), it can call the governor directly. However, Artamonov says that he has never been called; no official appears willing to face the wrath of the governor, so the power to block and stymie is broken, leaving little space to extract a bribe.

Providing adequate infrastructure and eradicating corruption are probably the two most significant factors in Kaluga's attractiveness, but the region also offers significant tax breaks for investors. "The tax regime in Kaluga is a good deal for investors," says Artamonov. "They see the territory like the EU and maybe even better, as there is a cadre of people ready to work and a number of industrial clusters already in place."

The key reform was to create a series of business parks that come fully equipped with the infrastructure, power and IT needed to do business. A total of 134 companies - both domestic and foreign - have invested over $7bn in facilities between 2006 and the first half of 2013 in the ten industrial parks that the region boasts.

From the outset, Kaluga focused on the idea of building up mutually beneficial clusters, of which the automotive complex is probably the best known. Today, Kaluga's automotive cluster is ranked third in Russia in terms of output and brings together 28 companies including Volkswagen, PSA Peugeot CitroÃ«n, Mitsubishi Motors and Volvo. In addition, there is another layer of parts manufacturers that are springing up around this core and another layer of non-related manufacturers that have moved into the same business park.

Another thread in the cloth has been the region's focus on producing qualified workers for all these factories. Education remains a mainstay of the region's policy to attract investment. "Early on, we opened a training centre for automotive workers to produce the 'future employees' for the industry. 8,500 people were trained and now the other regions are starting to copy this innovation."

In addition to the technical university and vocational training, the governor also holds regular seminars and in-house training for the local administration's staff, who have to attend weekend seminars once a month to study things like crowdsourcing and management techniques. "The training is designed

to develop the right-hand side of the brain," says Artamonov, who has taken up painting in his spare time to help the development of his own right hemisphere.

Kaluga has moved beyond establishing simple industrial parks and Artamonov hopes to develop clusters of clusters.

The automotive cluster is already self-sustaining and next up will be a pharmaceutical cluster, which is developing around the German firm Hemofarm, which already makes products not only for the Russian market, but exports to Europe and the US as well. Companies from the UK, Italy, Denmark and Sweden also have definite plans to invest in the cluster. "The point with industrial parks is they need to be diverse. If there is a crisis, then a mono-themed park will die, as there will be no work," says Artamanov.

And several other projects are in development. Artamonov has plans for the rail sector where the region intends to build rolling stock, locomotives and provide logistical services. Other new directions include logistics, mining equipment, power turbines, radio equipment, timber and paper production.

The second plank for the region's development is to focus more attention on promoting small and medium- sized enterprises. "SMEs are the most important factor for the stability of the local economy, as they provide profits and employment," says Artamonov. "SMEs already account for 30% of the gross regional production." 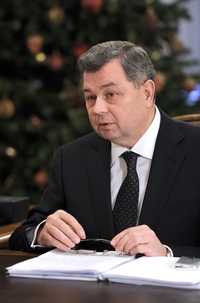