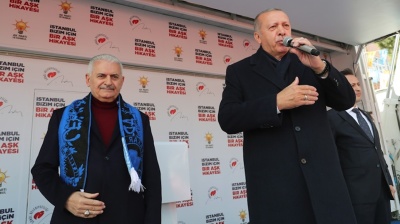 Erdogan (right) was on March 29 attending campaign rallies in Istanbul with the AKP party's candidate for the city, ex-PM Binali Yildirim.
By bne IntelliNews March 29, 2019

There is one thing about Turkey’s local elections due on Sunday March 31 that cannot be repeated enough. The country has no more major polls scheduled for another four years so the occasion represents the last time for a long time that Turks will have the chance to show their feelings at the ballot box towards their executive president, Recep Tayyip Erdogan.

And if the elections were not essentially a referendum on his near-17 years at the top before this week, they most certainly are now with Turkey’s currency crisis having reared its ugly head again and following Erdogan’s decision to try to shut down the operations of global market short sellers of the lira, a move that has sparked intensified turmoil in Turkish assets.

Feverish speculation
In the final run-up to election day there has been feverish speculation as to whether recession-hit Turks could give Erdogan and his ruling Justice and Development Party (AKP) a bloody nose in the capital Ankara and take their legs from underneath them in Istanbul. Such a double loss would be a huge blow to the authority of strongman Erdogan and the AKP—who since last year have been running the country as a presidential republic with a diminished parliament, no prime minister and sweeping powers for the president—and there is a big debate among academics as to whether ruling officials would countenance it.

One big sceptic of Turkey’s democratic credentials—remember this is a country that has detained towards 200,000 citizens since the mid-2016 attempted coup, has fired tens of thousands of people from state employment, has seen its bid for European Union membership derailed because of its wretched human rights record and has become the world’s biggest jailer of journalists, not to mention officials’ habit of accepting unstamped ballots—is Howard Eissenstat, associate professor of Middle East history at St. Lawrence University, New York State.

In a Twitter thread, Eissenstat observed: “Given economic and political malaise, the AKP would see a drubbing in free, fair elections. It will likely see some setbacks, but they will not be as pronounced as news items suggest. Turkey's elections are not free and fair.”

He added: “This does not mean that the AKP is immune from the polls. Turkey's elections suffer from extensive manipulation; massive fraud, however has very high costs and would only be employed in extremis [but] I think—if forced—the AKP would be willing to employ massive rigging to ensure a victory in Istanbul. I can't imagine any scenario in which Erdogan allows that city out of AKP control, regardless of what the voters say.”

Yavas might win “despite manipulation”
Looking at Ankara, Eissenstat said he believed that Mansur Yavas, a lawyer standing for the main opposition Kemalist, Social Democratic Republican People’s Party (CHP), “might conceivably win… despite election manipulation”. “Massive rigging would be very costly for the AKP. If he does, I don't expect him to stay in office for very long. Turkish prosecutors will quickly get to work taking him down,” he added.

The AKP seemed to be “legitimately nervous about Mansur Yavas's candidacy”, Eissenstat noted, also writing that Yavas only lost in 2014 through election day manipulation and that the AKP “is certainly not *more* popular today than it was in 2014”.

Looking at the damage an Ankara defeat could do to the ruling party, journalist Murat Yetkin told Reuters. “The psychological factor of losing the capital, losing one of the big cities in Turkey, could be perceived by voters as the beginning of the decline [for the AKP].”

The news agency also quoted Ismail Akin, a market seller in Ankara who said he intended to vote for Yavas, as saying: “We voted for this man [Erdogan] for 20 years. Enough. Let’s hit him with the back of our hand so he sees what this nation is made of.”

“They gave us everything, financially and emotionally”
But other voters talked to by Reuters retained a loyalty to the Islamic-rooted AKP. “They [the AKP] gave us everything, financially and emotionally. There are no economic troubles. Are there?” the voter, who gave his name as Neriman, said while shopping for vegetables. “I am planning on voting for the AK Party because for years we’ve been so much better off,” he added.

As well as a botched economy—Erdogan has previously presided over years of stellar economic growth fuelled by debt, the chickens of which have now come home to roost—Turkey’s populist leader also has to contend with how the Peoples’ Democratic Party (HDP) has for these elections decided to concentrate on their Kurdish-dominated heartlands in the southeast of the country, meaning their voters in other parts of the country will swing behind the CHP-led Nation Alliance coalition. The HDP is set to reclaim multiple mayorships across the southeast but it may well then suffer the same fate as it has previously—citing “terrorist” associations and other apparent wrongdoings the Erdogan administration will replace HDP mayors with ‘trustees’.

The AKP is fighting the local elections with its ultra-nationalist parliamentary partner, the Nationalist Movement Party (MHP), under their People’s Alliance umbrella. Should the results prove an embarrassment some analysts expect their political pact to be damaged by finger-pointing over what went wrong.

Erdogan, 65, a former mayor of Istanbul, has this week been holding up to half a dozen rallies per day. Clearly feeling the heat, he has lashed out at perceived conspiratorial enemies at home and abroad, regularly suggesting that a vote for the CHP is a vote that encourages Turkey’s “terrorist” enemies. He has described the elections as a “matter of survival” for Turkey.