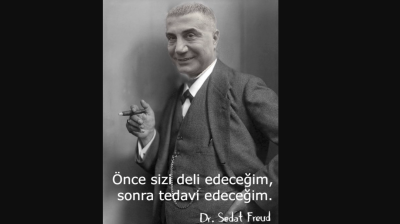 Sedat “The Botox” Peker, Turkey's fugitive one-time mafia boss who turned YouTuber and Twitter influencer as he spilled the beans on the Erdogan administration, has discovered a gold mine of filthy graft in Borsa Istanbul. Sad to report, however, that The Botox is a bit of a medical case. He has a bad case of narcissism—and narcissism is the twin-sister of an inferiority complex.

(Article photo: “Dr Sedat Freud”: “I will first drive you insane, then I will treat you.”)

Having relished the taste of dominating Turkey’s agenda with his v-logging performance as a YouTuber laying on drip-drip revelations, The Botox now turns really angry when his disclosures fail to generate much noise.

However, with his latest news sensation (yes, The Botox can be described as the best journalist covering Turkey at the moment), devoted to Borsa Istanbul—more aptly referred to as “Casino  Istanbul”—he quenched some thirst for click-o-mania with some focus on the power of the individual investors (in Turkish called the “kucuk yatirimci”, or “KY”, meaning “small investor”) in the country’s biggest betting arena.

As of end-July, there were 2.5mn local investors registered to invest on Borsa Istanbul. Most registrations are fake accounts. Accounts, for instance, can be opened in the names of family members and so on for a range of reasons, such as qualifying for more shares in initial public offerings (IPOs). Also, organised gangs keep many accounts under their control.

At the end of the day, we can say there are around one million active individual investors. But they are really loud. These investors are extremely active on social media and are members of the middle class, the main target audience for the media. They are the Turkish version of the character who yells, “I’m a taxpayer!” at the cops in the US.

It was in May 2021, when The Botox became the most popular broadcaster in Turkey with his v-logging exploits sent online from a bolthole in Dubai. But his airtime was curtailed after Turkey’s president, Recep Tayyip Erdogan, took out his ticket to YouTube with a precision strike by re-becoming blood brothers with UAE sheikh Muhammed bin Zayed, known as MbZ.

Still, MbZ stopped short of handing over The Botox to Erdogan, merely banning him from YouTubing instead. So The Botox then tried his hand as a Twitter influencer. Not so fast, said MbZ, who responded by forbidding him from tweeting about the Erdogan regime.

Not to be entirely thwarted, The Botox turned to some fake Twitter accounts set up by his gang members. He is able to retweet via his own account, @sedat_peker.

Peker also has a press agent (@emreolurr) and talks to journalist Erk Acarer (@eacarer) (Acarer is a real journalist. He must be because some Erdogan regime gangs broke his nose in the garden of his home in Germany after he wrote some stories based on the mafioso’s revelations. Since that time, The Botox has applied a positive discrimination to Acarer compared to other journalists).

So we can say this guy is well organised. Not so much of a surprise given his main profession has been organised crime, but when starting out perhaps he never expected to add quite such a range of attributes to his résumé. Youtubing, social media influencer, legal affairs (trials and jail time) and psychiatry (Peker has been a, no doubt, star psychiatry patient since his teen years), for starters.

Prior to his foray into goings-on at Borsa Istanbul, The Botox was providing information on the connection between the clandestine anti-communist Operation Gladio, once run by the West, and known in Turkey as “Counter-Guerrilla”, with Erdogan in relation to the Turkish leader’s close associate Hasan Yesildag. The foreign audience does not hear of Turkey’s Gladio stories because they are censored.

The Turks also do not bother themselves too much with Gladio affairs and The Botox appeared to fall into something of a despondency when his tales’ failed the popularity test. It was last weekend, however, when his mood finally picked up. Our curious narrator found himself shaking the foundations of Turkey once more with his Borsa Istanbul story.

On August 29, opposition parties filed some criminal complaints. They demanded action over the convicted crime boss’s claims of a stock market corruption network. So, once more, we find ourselves with The Botox as the most popular figure putting in a performance on the political scene in Turkey and the opposition parties, which had been maintaining a studied cool through various other songs of our canary, now paying homage to The Botox to capitalise on his popularity.

As The Botox is an ex(?)-Gladio apparatus, this situation describes Turkey pretty well. “Is Turkey a Gladio state?” is the rhetorical question here. We had a story that delved into this question.

The Botox’s Borsa Istanbul story is, meanwhile, an ultra-sexy story that falls beyond the scope of the censor (it is not about post-colonialism). Foreign media—excepting the British establishment media since, the politics being what they are, it refrains from publishing negative stories about the Erdogan regime—could easily milk this story. After all, it is all about the “global fight against fraud.”

It's a tale of machinations, family affairs, sex, unfortunately no drugs so far, but cash, secret lovers, guns, bread knives (big ones) and so forth.

According to the revelations—built on official documents, videos and witnesses among other things—courtesy of The Botox, Ali Fuat Taskesenlioglu, ex-head of Turkey’s capital markets board, the SPK, is said to have received $180mn in bribes via a criminal circle that includes his sisters (one an AKP MP), a brother-in-law, Erdogan palace aide Serkan Taranoglu, a journalist, a news website and some officials.

The Botox even gave the address of apartments where Taskesenlioglu allegedly keeps the cash. Since the allegations broke, some of it is said to have been removed, but more apartments are now in the picture with four “big” safe boxes, according to our mobster friend.

One could ask how The Botox could have accessed such information. Well, given the corrupt state of Turkey, no-one with any sense in the country who has a legal problem goes to a courthouse or to the media, as the notion of fair and objective treatment from these institutions has become laughable. No, they go to The Botox.

Those who wish to exercise their eyebrows can catch up with any number of stories in circulation. For instance, there’s the “businessman” who bribes an official who is then removed from his post before he can make the requested move. The businessman asks to be paid back, but the official says no. In the end, the businessman threatens to tell the story to The Botox. The official refunds the money.

Gangsters jostling within the regime for power also leak information to The Botox. On August 27, for example, Peker wrote that pop singer Gulsen, detained after a controversial quip related to religious schools made on stage in April, would be released on August 29 in another attempt at manipulating the country’s agenda.

On August 29, Gulsen was indeed released, to house arrest. The Botox has claimed that she was arrested in the first place to create a big noise to distract from his Borsa Istanbul revelations.

Let’s conclude this article with some official statements. The pit is fun and bottomless.

On August 28, the SPK stated that it would file a criminal complaint about Mine Tozlu Sineren, chairwoman of Marka Yatirim Holding (MARKA), since she had claimed that Taskesenlioglu’s circle asked for bribes from her to approve her application for a capital increase through rights issues.

On August 28, Qua Granite (QUAGR) said that the Qua Hotel, which was mentioned in the Taskesenlioglu story, does not belong to Qua Granite but to another company, in which Qua Granite chairman Ali Ercan has a 51% stake.

Also on August 28, Gezinomi (GZNMI), the company in which Ali Ercan is said to have the stake, said that any social media statements were not related to its operations and that it continues its operations based on its IPO reports.

Rights issues are a perfect way to suck the teat that produces money from the KYs.

As a final observation, note that this story is only all about small companies listed on the Borsa Istanbul because The Botox has got his hands on some juicy documents. But everyone is aware that the real story in Turkey turns on the so-called blue chips, renowned holdings owned by flamboyant families and the sovereign wealth fund (TWF/TVF).

Keep those fingers crossed. Perhaps, we will learn details of how the main indices of the Casino Istanbul continuously break records on a lira basis via the price movements of just a few stocks. That’s right, ask your news providers for some real stories about the gamblers’ husk that is the Borsa Istanbul, not for manipulative information circulated by gangsters.