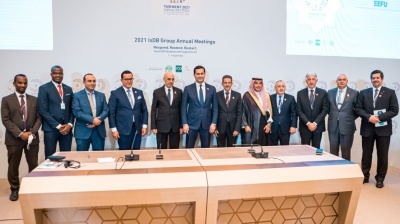 The IsDB held its 2021 annual meetings in Tashkent. / IsDB.
By Muzaffar Ismailov in Tashkent September 5, 2021

The Islamic Development Bank (IsDB) and the Uzbek government have announced the launch of Uzbekistan’s first dedicated impact investment fund, with initial capital of $100mn.

The fund, backed by private sector investors from Saudi Arabia, was one of a range of new funding commitments made by the IsDB during its 2021 Annual Meetings, held in the Uzbek capital of Tashkent. Uzbekistan also received a commitment for a $200mn fund focused on rural development. IsDB Group has expanded its funding commitments as part of its effort to support the post-pandemic economic recovery among its member countries.

To date, the Saudi Arabia-headquartered IsDB Group has provided $2.4bn in project financing and development funding in Uzbekistan, supporting 101 projects. In 2019, Uzbek President Shavkat Mirziyoyev issued an executive order creating a framework for expanded cooperation between Uzbekistan and IsDB.

In a speech during a session of the annual meetings, marking the 30th anniversary of Uzbekistan’s independence, Mirziyoyev hailed the cooperation with IsDB as evidence of the success of his country’s reform agenda and as a sign that Uzbekistan is ready to contribute to the development of the wider Islamic world.

Addressing the event, Mirziyoyev said: “It is deeply symbolic that the annual meeting of the bank is being held in Tashkent. We consider this a recognition of Uzbekistan's contribution to the development of the Islamic world, as well as of the consistent reforms carried out in the country over the past five years".

He added: "This international forum will bring our partnership with the bank to a qualitatively new level and will make a significant contribution to the general welfare of the peoples of the [IsDB’s] member states."

The initial capital for EEFU will be provided by the Uzbek government (35%), IsDB (20%) and private Saudi investors (45%). The backers expect the fund’s overall size to gradually increase to $500mn.

By providing financing to a targeted 34,000 micro, small and medium sized enterprises (MSMEs), social entrepreneurs and cooperatives, EEFU will aim to create over 100,000 new jobs in Uzbekistan. At least 50% of the beneficiary entities will be women and youth-led enterprises.

Financing will be provided through multiple channels, including credit lines, Murabaha finance and equity participation. Technical assistance will be laid on to address non-financial constraints for beneficiaries with the provision of management training, market access guidance and facilitating partnerships.

Uzbekistan became a member of the IsDB in 2003.

The annual meetings heard that an initiative has been put forward to create a trade and economic space dubbed, "From West Africa to East Asia—a Green Corridor". Its implementation would contribute to the expansion of trade and investment ties, economic convergence and sustainable growth for the economies of the involved countries.

On Monday, October 17, the World Bank downgraded all loans made by the International Bank for ... more