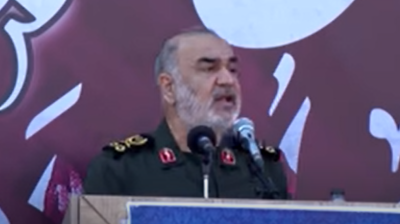 The Iranian regime on October 29 threw down the gauntlet to the protesters who have rocked Iran for the past six weeks, with the head of the powerful Iranian Revolutionary Guard Corps (IRGC) warning: "Do not come to the streets! Today [Saturday] is the last day of the riots."

However, on Sunday reports indicated that many Iranians defied the warning issued by Guards commander Hossein Salami, with university students, among others, clashing with security forces, including riot police and Basij paramilitary forces affiliated wih the IRGC.

The Guard and Basij have in previous years brutally crushed unrest. They said on Sunday that "seditionists" were insulting them at universities and in the streets. More force would be used if the protests continued, they warned.

In Tehran on October 29, there were reports that militia shot dead a doctor taking part in a protest.

"So far, Basijis have shown restraint and they have been patient," head of the Guard in Khorasan Junubi province, Brigadier General Mohammadreza Mahdavi, was quoted as saying by the state news agency IRNA. “But it will get out of our control if the situation continues.”

"Security is the red line of the Islamic Republic, and we will not allow the enemy to implement in any way its plans to undermine this valuable national asset," the country’s President Ebrahim Raisi said in his latest remarks on the standoff, according to state media.

The regime continues to paint the unrest as the conspiratorial work of Iran’s enemies, including the US, Israel and Saudi Arabia. In issuing his warning, Salami said: "This sinister plan, is a plan hatched ... in the White House and the Zionist regime [Israel]. Don't sell your honour to America and don't slap the security forces who are defending you in the face."

Further unverified video footage, leaked to Vahid Online, purported to show a Basiji member saying: “Only because Agha [a reference to Khamenei] said to not kill them, we have held back, but I swear we would gun all of them down.”

The activist HRANA news agency said 283 protesters had been killed in the unrest as of Saturday, including 44 children. A total of 34 members of the security forces have also been killed, it added. Also according to HRANA, more than 14,000 people have been arrested, including 253 students, in protests in 132 cities and towns, and 122 universities.

VOA on October 28 reported that Iran’s elite technical university, Sharif University of Technology, has become a hub of protests.

The protests were sparked by the mid-September death of Mahsa Amini, a Kurdish Iranian 22-year-old woman who died in the custody of the Tehran “morality police” after being detained for allegedly wearing her hijab, or headscarf, in a way that breached Iran’s Islamic dress code. Sky News on October 28 presented evidence that the authorities’ assessment of how many people attended a memorial held at the cemetery where she is buried in Kurdistan province was a substantial under-estimate. The broadcaster also reported on smuggled out video footage revealing the “truth” about violent clashes and the death of a 16-year-old during unrest in the city of Urmia.

The US will this week put the United Nations spotlight on the protests in Iran and look for ways to promote credible, independent investigations into Iranian human rights abuses committed during the unrest, Reuters reported.

Germany and the European Union, meanwhile, are assessing whether to classify the Guard as a terrorist organisation, German Foreign Minister Annalena Baerbock said on Sunday.

DPA reported on October 30 that German police were investigating an attack on an anti-Islamic Republic demonstration outside the Iranian embassy in Berlin in which three people were injured.

Iranians of all political colours have increasingly faced off against each other in recent weeks around the world, with large scuffles reported in Canada, US and Europe. In the Berlin incident, three pro-Islamic Republic men reportedly ripped down banners and Shah-era flags from a caravan parked outside the embassy.

In Kyiv on October 28, a group of Iranians protested against the Iranian regime’s support for Russia in the Ukraine war. Tehran continues to deny accusations that it has sent hundreds of military drones to the Kremlin.