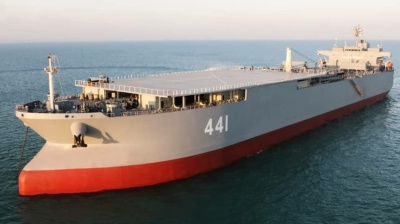 Iran’s navy started a short-range missile drill in the Gulf of Oman on January 13 while at the same time inaugurating its biggest vessel, a logistics ship formed from a converted oil tanker, IRIB reported.

The two-day exercise comes amid growing tensions between Tehran and the outgoing US Trump administration which on January 12 claimed—without offering any hard evidence—that Iran is the new home base of Al-Qaeda and on January 13 alleged links between the clerical regime in Tehran with the Taliban in Afghanistan. Sceptics note that both Al-Qaeda and the Taliban are Sunni Islamist whereas the Islamic Republic of Iran is Shi’ite Muslim. Iranian Foreign Minister Mohammad Javad Zarif has described the Al-Qaeda accusations as "warmongering lies."

There are still fears among some analysts that President Donald Trump might authorise a military strike on Iran during the final few days of his administration prior to Joe Biden taking over the presidency. Nouriel Roubini, professor of economics at New York University's Stern School of Business and a former senior adviser to the White House council of economic advisers and the US Treasury, on January 13 wrote in the Guardian: “[…] a desperate Trump may try to ‘wag the dog’ by ordering a strike – perhaps with a tactical nuclear warhead – on Iran’s main nuclear facility in Natanz, on the grounds that it is being used to enrich uranium. Far from this being out of the question, the Trump administration has already held drills with stealth bombers and fighter jets – loaded, for the first time, with tactical nuclear weapons – to signal to Iran that its air defenses are no defense at all.

“No wonder Speaker of the House Nancy Pelosi felt the need to reach out to the chairman of the US Joint Chiefs of Staff to discuss steps to prevent a nuclear strike by the Dr. Strangelove in the White House. Whereas an unwarranted order to launch a nuclear attack on a target with a large civilian population would be rejected by the military as obviously “illegal,” an attack on a military target in a non-populated area might not be, even if it would have dire geopolitical consequences. Moreover, Trump knows that both Saudi Arabia and Israel would tacitly support an attack on Iran (indeed, the US may avail itself of Saudi logistical and ground support to carry one out, given the shorter range of nuclear-armed fighter jets).”

Iran’s missile drill was held with both the regular navy and supporting Islamic Revolutionary Guard Corps (IRGC) units in attendance.

On January 9, the IRGC held a naval parade in the Persian Gulf with a full show of force to ward off foreign ships from Iranian waters.

State television said that the 121,000-metric tonne IRINS Makran is the largest Iran-produced ship at 228 metres in length and 42 metres in width. It is claimed that the Makran, with helipads on the top deck, is capable of undertaking a three-year non-stop mission at sea.

TankerTrackers.com, which spotted the Makran at Bandar Abbas Port on Iran’s Persian Gulf coast, said it was converted from an Aframax oil tanker in 2019. Her original name was the BETA (9486910), a vessel registered in Monrovia, Liberia.

The launch of the Makran comes a few days after Iranian forces seized a South Korean tanker that was on its way out of the Persian Gulf. Analysts see Iran as using the vessel as leverage in talks with Seoul for the unblocking of billions of dollars owed to Iran in oil money that are frozen in South Korean accounts, with the South Koreans blaming the situation on US sanctions.

Zarif told a South Korean delegation that visited Tehran on January 11 that the release of the Hankuk Chemi oil tanker and its 20 crew was a matter for the courts. The vessel has been accused of polluting the Gulf.

Ukraine will receive $5.5bn in support from the US later this month
12 hours ago
John Malkovich to turn Skopje into Hollywood of the Balkans
12 hours ago
Envoy says start made on construction of Turkish attack drone factory in Ukraine
22 hours ago
Huge explosion rocks Russian airbase on the Crimean peninsula
1 day ago
Russia cuts oil flow via Ukraine's Druzhba pipeline, blaming sanctions for blocking transit payments
1 day ago