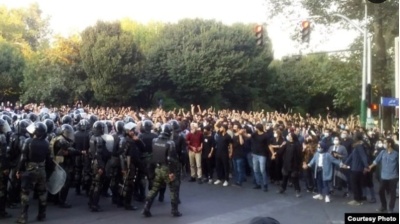 Iran’s nationwide protests over the death of Mahsa Amini in the custody of the morality police were taking on the form of a popular revolt, as the unrest entered its sixth straight night on September 22.

There were varying accounts of how many people had lost their lives amid the street demonstrations in scores of towns and cities, with most accounts settling on around 20 people, including four or five members of the security forces. Some reports spoke of more than 30 dead. Norway-based Kurdish rights group Hengaw posted a video where heavy shooting can be heard during a protest. It accused security forces of "using heavy and semi-heavy weapons against civilians" in the northwestern town of Oshnavieh.

“We're witnessing the beginning of the greatest challenge to the Islamic Republic since 2019,” Hadi Ghaemi, executive director of the New York-based Center for Human Rights in Iran (CHRI), told RFE/RL, referring to the violent 2019 protests that were triggered by a sudden gasoline price hike but soon turned into a call for the downfall of the clerical establishment.

“How it will evolve depends on the ferocity with which the government represses the protests and the extent to which the international community keeps a spotlight on Iran so mass human rights violations do not occur in darkness,” Ghaemi added.

The grief and anger over the fate of 22-year-old Amini—whom protesters claim fell into a coma and died because she was beaten by a Tehran “guidance patrol” that detained her for the improper wearing of a hijab head covering and other attire—continued to bring people to the streets, with some protesters torching police stations and vehicles in the capital and other cities.

Iranian President Ebrahim Raisi warned protesters: "There is freedom of expression in Iran ... but acts of chaos are unacceptable."

In more conciliatory remarks, Raisi, who was in New York for a gathering of the UN General Assembly, said the death of Amini, a Kurdish woman from the north-western city of Saqez, must be investigated. But he repeated a coroner's conclusion that the young woman was not beaten. Iranian police claimed she had suffered "sudden heart failure".

Attacking the West for its response to the controversy, Raisi accused Western nations of double standards. "Every day in different countries, including the United States, we see men and women dying in police encounters, but there is no sensitivity about the cause and dealing with this violence," he said.

Assessing the scale of the gathering revolt, BBC Persian's Rana Rahimpour told the BBC Radio 4 Today programme: "Now, we have seen so many men joining in and it has moved on from a protest against the compulsory hijab. It's now against the whole existence of the Islamic Republic."

In other developments, Raisi withdrew from a long-planned interview with CNN's chief international anchor Christiane Amanpour at the UN General Assembly after she declined a last-minute demand to wear a headscarf, while the US announced it had imposed sanctions on the Iranian morality police.

In a speech at the Assembly, US President Joe Biden said: “Today we stand with the brave citizens and the brave women of Iran who right now are demonstrating to secure their basic rights.”

September 22 also brought an announcement from international activist hacker group Anonymous that it had taken down several Iranian government and state-owned websites. The website of the Iranian presidency, the government-affiliated Fars News Agency and the forensic medical research centre of Iran were among the hacked websites that were unavailable.

Iranian officials in the past couple of days appear to have stepped up efforts to disrupt the spreading of the protests by throttling the internet and taking social media sites offline. Internet-monitoring group NetBlocks reported that Iran was experiencing the most severe internet restrictions seen since the 2019 unrest. Mobile phone networks were largely shut down, internet service was disrupted during the occurrence of protests and access to Instagram and WhatsApp was being restricted, it said.

Pro-government protests are planned for September 23 and some marchers have already taken to the streets, Iranian media said.