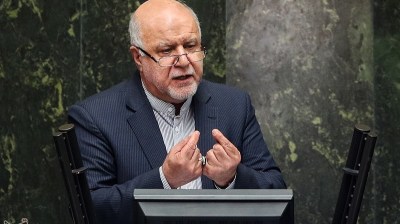 Zanganeh said the Greek and Italian governments have not offered Iran any explanation for not buying Iranian crude.
By bne IntelliNews February 6, 2019

Iran’s Oil Minister Bijan Zanganeh on February 5 criticised Greece and Italy for not buying his country’s oil despite having US waivers that allow them to do so without fear of incurring sanctions. He said they had not offered Tehran any explanation.

"No European country is buying oil from Iran except Turkey," the semiofficial ISNA news agency quoted Zanganeh as saying. Greece and Italy, which like six other countries were awarded 180-day waivers in early November, "don't buy Iranian oil and they don't answer our questions", he added.

"We have called them many times, but they do not return our calls," the minister also said, according Fars news agency reported.

Zanganeh’s disgruntlement adds to tensions between Tehran and Brussels over how much the EU has or has not done to help Iran resist the US attempt to throttle its economy.

The two EU member states, Turkey, China, India, Japan, South Korea and Taiwan received the waivers allowing them to import Iranian oil without the risk of triggering Washington’s sanctions, with the US agreeing these countries needed more time to comply with the measures. India is known to have already applied for an extension of its waiver, and other countries among the eight are expected to do so. In return for the award of the waiver, the nations are meant to gradually wind down their purchases of Iranian crude.

Zanganeh also told Iranian media outlets that the US sanctions on Iran were more difficult to address than the Iran-Iraq war in the 1980s, but added that Tehran was determined not to allow the Trump administration to reduce its oil exports to zero.

Oil export revenues are indispensable to the economy of Iran, which has the fourth largest oil reserves in the world. Petrochemical exports, also subject to the US sanctions, are another big revenue earner for the Iranians.

Hiding its failures has become “crucial” for the Erdogan administration, according to Marc Pierini, a visiting scholar at the Carnegie Europe think tank. In an ... more