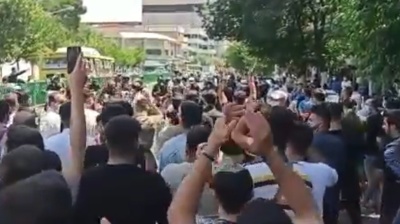 Crowds of shop owners in central Tehran appear to have come out in protest against the Iranian government’s handling of the ongoing water crisis centred on Khuzestan province as well as waves of blackouts, unverified video footage uploaded to Twitter by several Tehran-based journalists showed on July 26.

bne IntelliNews reported on July 21 how unrest in Khuzestan—now into its 12th day—amid Iran’s worst drought in 50 years threatened to escalate to the capital, though it is too early to say whether Tehran is witnessing demonstrations that either are, or might become, substantial. Local officials portrayed the shopkeepers’ protest as purely in response to a blackout that hurt district commerce, though some of the chanting reportedly heard at the demonstration suggested it also channelled far wider dissatisfaction with the powers that be.

Ahead of next week’s inauguration of hardline cleric Ebrahim Raisi as Iran’s next president, there is a level of rising discontent in the country—over issues including water and power shortages, the fact that Raisi’s path to power was cleared by the disqualifying of top moderate candidates, high unemployment and inflation, decimated pensions, low wages in Iran’s energy industry that have prompted several-months-long labour disruption and widespread dissatisfaction amoung businesses and the population at how the coronavirus outbreak has been addressed—to potentially create tinderbox-like conditions.

At least five people have been killed during the demonstrations in southwestern province Khuzestan, including one police officer. Some foreign media reporting has suggested the death toll could be as high as more than a dozen. Also, there are unauthenticated accounts of several hundred people injured in clashes in various cities. Rubber bullet marks purportedly on protesters’ bodies have been shown in unverified material deposited on some social media. Officials are thought to be attempting to clamp down on the protests partly by cutting off or slowing mobile internet services. Nowadays, the authorities in Iran tend to do this as a matter of course as soon as any substantial protest on the streets breaks out.

At the Tehran protest, people are seen in videos posted on Telegram Messenger outside malls and the British Embassy on Jumhouri Street chanting “Bury the mullahs!”, “Clerics get lost!” and “Neither Gaza, nor Lebanon, my life for Iran.” Again, however, it was not possible to verify the circulating footage. Other unconfirmed videos on social networks apparently showed people targeting Supreme Leader Ayatollah Ali Khamenei with chants including “Death to the dictator!”

Tehran residents have, meanwhile, been discussing the increasing police presence at many underground metro stations and on the streets.

One, Mehdi Salimi, wrote on Twitter: “There seems to be more police presence in Tehran than on any other day. As soon as I walked out of the metro station, they took me aside and searched my backpack. I had a couple of table-tennis bats and some books. They gave me a sharp gaze and tossed my backpack back to me.”

Further unauthenticated footage circulating online was said to show how at around 15:30 local time, police on motorbikes blocked protesters walking along Jumhouri Street before they reached the parliament complex at the end of the boulevard. A woman is seen shouting at police officers blocking a group of chanting men.

The internet disruption in the country has involved throttling both via traditional wired ADSL internet and mobile fourth generation (4G) internet connections, NetBlocks.org said on July 22.

Daily Jumhouri Islami on July 26 published a letter from its editorial board, which advised that the government must take note of the worsening situation in the country and said that “they only have themselves to blame” for the ongoing civil disturbances.

“People are not satisfied with you, if you have all the arsenals in the world, you cannot maintain this system,” the board said.