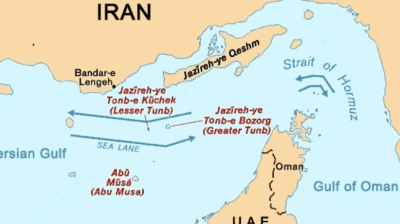 The islands of Greater Tunb, Lesser Tunb and Abu Musa were seized by Iran in 1971 after a departure of British armed forces. / ArmanJan, public domain, cc
By bne IntelIiNews December 12, 2022

Iran’s foreign ministry on December 10 took the rare move of summoning China’s ambassador to Tehran after Beijing issued a joint statement with Arab states that controversially dealt with the matter of three long-disputed islands in the Strait of Hormuz.

Though there was clear anger in Tehran at the move, Iran’s leadership was obviously taking pains not to upset China with its response to the statement—instead of announcing that it was “summoning” the Chinese envoy, the Iranian foreign ministry said the ambassador “had a visit” with a foreign ministry official, during which Tehran’s “strong dissatisfaction” was conveyed.

The controversy blew up as Chinese President Xi Jinping visited Iran’s arch-rival Saudi Arabia on December 9. He also met leaders of the Gulf Cooperation Council (GCC) countries. Tehran was observing the visit like a hawk as Iran and Saudi Arabia are competitors when it comes to the provision of huge volumes of crude oil to Beijing.

The bone of contention unearthed by the Chinese-Arab joint statement is the ownership of the islands of Greater Tunb, Lesser Tunb and Abu Musa, governed by Iran since 1971 but claimed by the United Arab Emirates (UAE). It was in 1971 that the then-shah of Iran dispatched the Iranian royal navy to the three islands after the British withdrew their armed forces from territories that are today the UAE. Iran has ever since rejected statements from Emirati leaders that the islands belong to the UAE. The inhabitants of the islands are all Persian-speaking Arabs who use the Bandari dialect of Persian, which is infused with Arabic words and syntax.

Xi and the GCC leaders signed a statement that urged “bilateral negotiations in accordance with the rules of international law, and to resolve this issue [over the sovereignty of the islands] in accordance with international legitimacy”. In signing the statement, China crossed a red line in Iran’s eyes as Tehran’s standpoint remains that it will not countenance any talks on the islands.

Iranian Foreign Minister Hossein Amir-Abdollahian asserted in a tweet that the islands were “inseparable parts of Iran’s pure soil”. But he ran into social media criticism for not naming China in his observations and for only writing in Farsi, whereas in the past he has tweeted both in Farsi and in Chinese in support of China’s territorial integrity.

China and Iran last year signed a 25-year cooperation agreement last year, seen as a roadmap to potentially massive investments worth hundreds of billions of dollars. Progress on realising any of the investments, however, is slow.

They issued a joint statement, which contained several clauses that directly dealt with Iranian affairs, its nuclear programme, and its regional activities.

The statement signed by Xi and his GCC counterparts also referred to ensuring the peaceful and civilian nature of the Iranian nuclear programme and called on Tehran to fully cooperate with the International Atomic Energy Agency (IAEA). On December 11, Saudi Arabia’s top diplomat remarked that “all bets are off” if Iran “gets an operational nuclear weapon”.

China and the GCC member states also in the statement referred to the need for dialogue on Iran’s “destabilising regional activities” and “support for terrorist and sectarian groups and illegal armed organisations”.

Xi’s visit was partly arranged for the first China-Arab States Summit and the China-GCC Summit.

As anger grew in Iran over the outcome of Xi’s visit, Iranian newspapers hit out at China. Ham-Mihan headlined an article, “China’s Turnaround on Iran”.

The daily Aftab was no less scathing about the Chinese. It published images of protesters in China, asking "Did the Chinese government hear the voice of the protesters?"

Reformist Etemad on December 11 asked, “What is China’s plan for the Middle East?”

China’s government-controlled Global Times on December 12 declared that Xi’s visit to Saudi Arabia opened a new chapter of relations between the Arabs and the Chinese.

Chinese media were generally very upbeat about the new relations between the GCC and Beijing, predicting the Arabs and Chinese would boost their cooperation in multiple fields over the next few months and years.