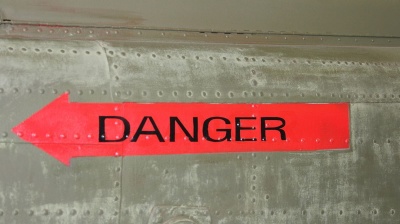 Blaring news headlines describing violent episodes in a remote land are rather a big turn-off for most foreign investors, but in the past few weeks all hell has broken loose in the Central Asian republic of Kyrgyzstan on a frighteningly regular basis.

First came the latest clashes on the Kyrgyz-Tajik border that left one civilian dead and seven wounded; then a brawl between stone-throwing Kyrgyz locals and Chinese gold miners ended with 47 workers injured and Chinese company Zhong Ji Mining’s operations suspended; and, last but not least, a bloody confrontation erupted after Kyrgyz security forces botched a raid on ex-president Almazbek Atambayev’s compound and found themselves in a violent standoff with Atamabayev’s incited supporters. The operation concluded with one commando dead and 170 people, including 79 law enforcement officers, injured. The last event was by far the most significant, but it is the sheer amalgamation of violence-infused headlines that continues to mar Kyrgyzstan’s image to outside observers. 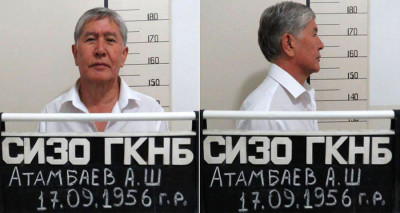 Official mugshots of ex-president Atambayev after his arrest. A victory for his adversary and successor Jeenbekov maybe, but not a great advert for businesses looking for a stable investment destination.

After regrouping, special forces the next day made another attempt at arresting Atambayev, and this time he surrendered himself quietly. But the carnage caused by the two-day battle at his residence in Koi-Tash village outside the capital Bishkek has some observers worried that the touchpaper could have been lit for a jarring political crisis, or even worse, another violent revolution. Kyrgyzstan’s knack for resolving its issues violently was already well known from the topplings of the Askar Akayev government in 2005 and the Kurmanbek Bakiyev administration in 2010.

Of course, it would be easy to think that Atambayev, who was a key figure in the two revolutions, would be a perfect martyr and symbol for the opposition to rally behind—except (and this is the good news for those praying for a quiet life in Kyrgyzstan) that is highly unlikely to be the case. His power struggle with his former ally and successor, President Sooranbai Jeenbekov—perhaps now to be thought of as Atambayev’s hoped-for-stooge-turned-Frankenstein’s Monster—over influence in Kyrgyz politics ultimately ended with a whimper rather than a bang.

Kyrgyz society “is fatigued”
“Atambayev’s popularity has waned. He has a very narrow circle of supporters, and for a significant number of them, only the money that he pays them matters. For the rest, there are [only] family ties,” Middle East and Central Asia expert Alexander Knyazev told Russia’s Vzglyad newspaper. “Kyrgyz society has accumulated significant fatigue from [the December 2011 to November 2017 rule of] Atambayev. In recent years, his rule was tolerated only out of unwillingness to face [yet another political] destabilisation. Therefore, being in prison, he will not become a symbol of the opposition again.”

Only a low-probability surprise intervention by a third-party is seen by Kyrgyz experts as being capable of fostering any kind of new countrywide conflict.

“I don’t believe that Atambayev will be able to organise protests throughout the country: the conflict is local in nature. But the problem is that, in a situation of this sort, a third-party destructive force can always materialise... interested in rocking the situation further,” Kyrgyz political analyst Igor Shestakov told the Eurasia.Expert news analysis website. 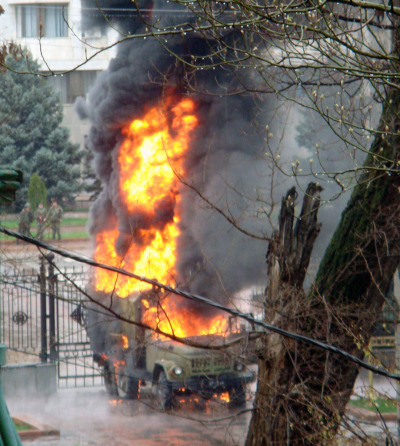 An opposition-captured vehicle burns near the capitol building in Bishkek during citywide protests and riots in April 2010.

Another consideration is that, despite its two 21st century revolutions to date, Kyrgyzstan’s leaders have remained loyal to the republic’s Soviet-era master, Russia, which runs a military airbase in the country. Given that Russia appears to have thrown in its lot with Jeenbekov and would not like to see any severe instability in the country, it is improbable that somebody could move to take advantage of Jeenbekov’s incarceration of Atambayev.

However, although it may not create any destructive consequences in the short term, the conclusion of the feud between Jeenbekov and Atambayev—who was simply stripped of his immunity from prosecution as an ex-head of state after a new law was adopted by the parliament—does not bode well for Kyrgyzstan’s already toxic political environment in the longer run. If Atambayev can be taken down so ruthlessly like this, so can Jeenbekov or any other ex-president to come. Such a reality might tempt future Kyrgyz leaders to attempt to hold on to power beyond the present six-year constitutional limit, jeopardising the nation’s struggle to install a functional democratic government (following its two revolutions, Kyrgyzstan became Central Asia’s first parliamentary democracy, but its pursuit of democratic standards still leaves rather a lot to be desired).

Fears exacerbated
Regardless of the exact consequences of Jeenbekov’s actions, the latest image projected by Kyrgyzstan cannot inspire confidence in many potential foreign investors, who were already suspicious of the country’s volatile environment. Fears have been exacerbated by more immediately relevant stories for the investor, such as the suspension of operations forced on Zhong Ji Mining by the extent of the attack it suffered at the hands of local inhabitants incensed at what they claim is pollution that has led to the mass death of livestock.

And the company is not the first mining firm to have met fierce resistance from ‘neighbours’. In April last year, hundreds of Kyrgyz locals, also angered by alleged environmental harm, stormed into Chinese miner G.L. Makmal Developing’s gold plant in Toguz-Toro district and burned down facilities and equipment. This incident occurred after a brief meeting with an interagency commission that ended in a violent confrontation that left three policemen wounded, with one hospitalised.

The backdrops to the attacks on the gold companies show a lack of clarity on whether Kyrgyz officials made reasonable efforts to address the concerns of the locals and foreign investors.

The suspicion of ineptitude is also seen when it comes to what were the Kyrgyz authorities’ unending disputes with Canada’s Centerra Gold, although something of an end to them was found in 2017. Kyrgyzstan’s political volatility was a clear factor in this case as Centterra originally signed its mining contracts in 2009, under the Bakiyev administration. Disagreements that broke out with the Canadian firm over profit-sharing were partly a result of the abrupt transition from a would-be dictatorship to a (still troubled) democracy.

The ex-Soviet state also found itself in a tense situation with yet another Chinese gold miner, Full Gold Mining, last year and again in January this year. The investor found itself dealing with angry Kyrgyz villagers at the Ishtanberdi mines, who staged protests and roadblocks and engaged in illegal “ninja-mining”. Some 370 workers at the mines subsequently refused to accept amendments to contracts which cut miners’ salaries. The Kyrgyz workers in the contractual dispute may not have done anything wrong, but the row again highlighted the inability of Chinese companies to enter the Kyrgyz mining sector with any kind of ease and hinted at the wider problem of corruption among the nation’s officials.

Major barrier of corruption
Corruption in Kyrgyzstan accounts for approximately $700mn in annual damages, according to UNDP figures, and stands as a major barrier to entry for many foreign investors.

Another recurring theme in the poor investment environment is the lack of trust in the judicial system shown by the local business community, let alone foreign businesses. This tends to magnify the authorities’ inability to address concerns of locals, leading to the perennial strife suffered by foreign investors.

"The judiciary in Kyrgyzstan has often been reluctant to engage with the press, contributing to a significant level of mistrust on the part of the Kyrgyz public and the media," International Development Law Organisation (IDLO) said in January.

"Due to a lack of specialised training on engaging with the press, judges are not well equipped to brief journalists in a way that maintains appropriate levels of confidentiality and simultaneously provides substantive information about the work of the courts," IDLO added. "As a result, there has been little transparency and objective knowledge about the judiciary’s performance, the challenges faced, or progress made, contributing to a lack of trust with the public."

IDLO posited that some progress was, however, being made, thanks to a USAID-IDLO Judicial Strengthening Programme.

The path to resolving these issues certainly does not take the route of more brawls, clashes, shootouts and political drama. Structural reforms and genuine efforts to combat corruption are clearly the way to go. But whether Kyrgyzstan will ever be able to overcome the conflicts between its elites and achieve a genuine democratic drive that deals with the apprehensions of its regular citizens remains a frustrating question.

Kyrgyzstan: Eccentric health minister fights for his job amid claims of corruption and bullying
Lukashenko hits out at lack of unity shown by member nations of Russia-led military bloc
EBRD expects 30% GDP contraction in Ukraine in 2022, lowers emerging Europe projections