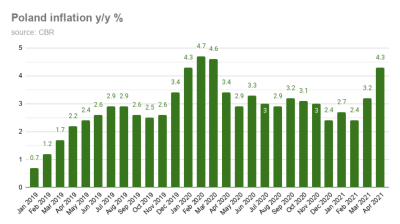 Polish inflation surged to 4.3% in April, well ahead of expectations / bne IntelliNews
By Rafal Benecki and Dawid Pachucki economist at ING in Poland May 7, 2021

Headline CPI jumped to 4.3% year on year in April. The idea that the National Bank of Poland can mimic the accommodative stance of the Fed or ECB is increasingly debatable. In terms of inflation, Poland is closer to the emerging markets. Interest rates in Poland should remain unchanged until the second half of 2022.

Headline CPI in Poland accelerated to 4.3% y/y in April from 3.2% in March, according to flash estimates by the Central Statistical Office. This is due to the low base in 2020, notably for fuel (+28.1% y/y in April vs +7.6% y/y in March). In contrast, the base for core inflation in 2020 was very high. So we estimate it fell in April to 3.5% y/y from 3.9% in March. The detailed structure of price developments will be revealed on 15 April.

The drop in core inflation should be interpreted cautiously. From April 2020, the CSO had to estimate some CPI components where the data was unavailable. This meant that high prices from the months before COVID were carried over to subsequent ones. There's no longer a problem with data availability, but the high base from April 2020 has squeezed the annual core inflation rate to 3.5% y/y. This rapid quarter-on-quarter rise in the first three months of the year shows that inflationary pressure is strong.

In addition to the base effects, elevated inflation in Poland is also related to rising services' prices and increasing production costs. In March, the Producer Price Index in Poland increased by 3.9% y/y compared with 2.0% in February. In April, the PPI may be close to 5.0% y/y. This index captures rising commodity prices and disruptions in global supply chains. As the economy opens up, demand pressures will become even stronger.

We expect average CPI inflation to be at 3.9% y/y this year.

The data shows that Poland is not the eurozone or the US, which struggled to spur inflation before COVID. Elevated inflation has persisted in Poland since mid-2019. In 2020, consumer prices increased on average by 3.4%. Poland entered the COVID recession with inflation at 4.7% in February last year. More structurally, high inflation is also a consequence of consumer-driven growth, with a steadily declining share of private investment in GDP.

The idea that the NBP can imitate global central banks like the European Central Bank and Federal Reserve is highly debatable, as we are closer to emerging markets in terms of inflation.

In our opinion, rate hikes in Poland should start in the second half of 2022. Until then, the Monetary Policy Council is likely to tolerate higher inflation and not take any action, as its current priority is to support growth. This approach has been suggested by the statements of Governor Adam Glapiński and the dovish majority in the MPC (Monetary Policy Comittee). They see the price increases as temporary and driven by factors beyond its control. Since March this year, the NBP has also accelerated the pace of asset purchases in Poland. In April, it bought the highest amount of bonds since June 2020. The only change in the tone of the dovish majority of the Council is that the scenario of further rate cuts is highly unlikely.

We believe that the accommodative monetary policy stance in Poland will be continued until the end of the MPC's term in the first half of 2022. Therefore we anticipate the first rate hike to take place in the second half of 2022.

Rafal Benecki is a chief economist and Dawid Pachucki is a senior economist at ING in Poland. This note first appeared on ING’s THINK.ING portal here.

Russia’s industrial output decline slows to only 0.1% in August
8 hours ago
Putin's popularity remains high, but even after a hit in September it is still at 77%
9 hours ago
Russia on track to have a record-smashing grain harvest
2 days ago
Bosnia posts annual CPI inflation of 16.8% y/y in August
2 days ago
IMF sees Romania’s economy growing by 4.8% in 2022, analysts are even more bullish
3 days ago