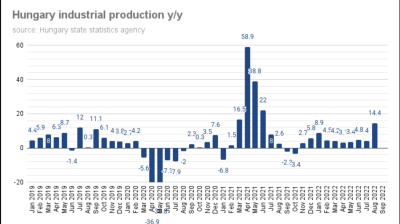 / bne IntelliNews
By Tamas Csonka in Budapest October 13, 2022
Output of the automotive industry, Hungary's biggest manufacturing sector, rose 58.0% y/y in August (chart), albeit from a low base hit by shutdowns, according to a detailed release of data by the Central Statistics Office (KSH) on October 12.

Growth of the segment, which has been challenged by the semiconductor shortage and supply chain problems over the past year, picked up from 16.6% in the previous month.

This year the usual end-of-summer shutdowns were cancelled because of forced halts in production in the spring, while in the base period scheduled shutdowns and supply chains halted production.

The KSH confirmed that headline industrial output increased by 14.4% in August, expanding at the fastest pace in more than a year.  Adjusted output increased by 9.3%, accelerating from 6.6% in the previous month.  On a monthly basis, output edged up a seasonally- and workday-adjusted 0.1%, and in the first eight months output was up 6.1% y/y.

Industrial production accelerated to 9.2% on average in the first two months of Q3 from 4.7% in Q2, which could support third-quarter GDP, Magyar Bankholding senior analyst Gergely Suppan said.

Soaring energy prices could force several sectors to cut production, and external demand could be weighed down by food- and energy price-driven inflation through a decline in purchasing power. The high order books could offset these negative impacts, he added.