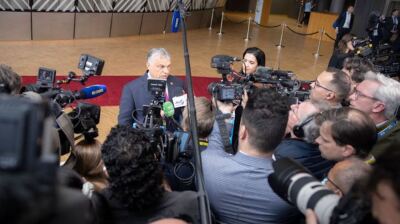 Hungarian Prime Minister Viktor Orban with journalists before the two-day EU summit in Brussels on May 30. / WIKI
By bne IntelliNews May 31, 2022

EU leaders have reached a compromise deal to ban Russian oil exports to the block's countries, putting maximum pressure on Russia to end its war against Ukraine, Charles Michel, President of the European Council, announced in the early hours of May 31, after the first working day of the extraordinary two-day EU summit in Brussels.

Russian oil imported by sea will be banned, which covers more than two-thirds of the EU’s oil imports from Russia, cutting a huge source of financing for its war machine, Michel said. The proposal allows a temporary exemption for pipeline supplies, the key demand of Hungary.

Budapest also received guarantees from EU leaders that it would be able to receive replacement supplies if the pipelines were disrupted.

Hungary's government has opposed a sweeping oil embargo as the landlocked country gets close to two-thirds of its oil from Russia via pipeline, and the country's main refinery is technically reliant on Russian crude.

Budapest warned that the ban on Russian oil would deliver a price shock to the country’s households and economy.

Earlier, European Commission President Ursula von der Leyen had said her expectations were "low" that a deal would be reached, while Ukraine's President Volodymyr Zelenskiy urged the EU to stop quarrelling.

At a press conference following the compromise deal, the head of the EU's executive branch said that the Russian oil coming to Hungary through the Friendship pipeline could be replaced by increasing the capacity of the Adriatic pipeline from Croatia.

The capacity increase could take around 45-60 days and "some investment", including the conversion of Hungarian refineries to process oil of a different quality. She said Hungary would have enough time to switch to using oil from other sources.

Before the summit, Orban told journalists that Hungary was prepared to back the EU's sixth sanctions package if a guarantee were made regarding the security of Hungary's energy supply, or in cases where oil supplies through the pipeline are disrupted.

In a Facebook post after the meeting, Hungary’s illiberal leader said the government had succeeded in defeating a European Commission proposal, which allows maintaining the retail energy price cap. Orban confirmed that approving the EU’s sixth round of sanctions in its original form would have been tantamount to a nuclear bomb on the economy.

"We have enough problems without it, high fuel prices and inflation and Europe as a whole is on the brink of a global economic crisis due to sanctions against Russia," he said.