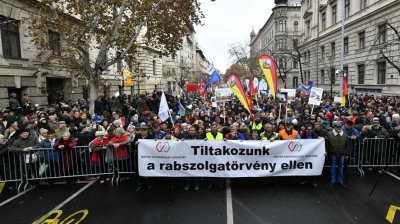 Some 10,000 protested planned change in overtime rules in Budapest
By bne IntelliNews December 10, 2018

Trade unions took to the streets of Budapest on December 8 against the planned change to the labour code that envisages increasing annual overtime from 250 hours to 400 hours. Union leaders threatened to block roads across the country from Monday against what they call the "slavery law".

Employees are being forced to work more overtime as companies are struggling to fill positions. Hungary’s huge labour shortage affects nine out ten manufacturing companies and it is now threatening new investments.

Several thousand protesters gathered in central Budapest planning to march to the parliament building in Kossuth Square, but at the last minute police sealed off the area, citing the arrival of the speaker of the Polish parliament.

Speakers condemned new legislation on overtime, which would raise the upper threshold for annual overtime from 250 to 400 hours. The bill, widely referred to as the slave law by opponents, would open the door to a six-day week "without payment", they said.

The bill submitted by two Fidesz MPs would also extend the period employers may account overtime for calculating wages and rest days from twelve months to three years. Critics say this would essentially eliminate the need for employers to pay extra for overtime work, as the overtime hours could simply be offset later by off-time work. The amended rules would benefit companies which have a couple of weeks of shutdowns in the summer and winter, such as large carmakers.

Labour unions fear that extra work hours would be carried over to recess periods and employees would not receive any premium payments even though working more.

German companies welcomed the government's amendment proposals that aim to improve the country's competitiveness and address labour shortage problems, Foreign Minister Peter Szijjarto said during his trip to Germany in late November. As a result of the challenges caused by low unemployment companies had long been asking the government to ensure sufficient workforce required for carrying out their investment projects, he added.

The proponents of the bill say it is aimed at dismantling administrative barriers in the labour code to allow employees to earn more through more work done on a voluntary basis.

Lajos Kosa, one of the two MPs submitting the bill, said it will not be possible to increase the number of hours employees may be required to work overtime without their consent, but at the last moment, this clause was withdrawn.

One labour union leader chastised lawmakers for showing a lack of care for families. "They think 400 hours of overtime is fine and it's okay to pay three years afterward," he said.

Slogans of banners held aloft by protesters read: "Together against the slavery law!”, "When dictatorship is a fact, revolution is a duty! “ and " We won't be Europe's China!".

According to the organisers, the demonstrators filled the street leading to the square in front of the parliament, roughly 10,000 people.

The Socialists said the bill's aim was to address the country's labour shortage by forcing Hungarians to work more. Caucus leader Bertalan Toth accused the government of making a "secret pact" with multinational companies to this end.

Opposition parties will seek a constitutional review if the bill goes through the parliament.

The head of the Hungarian Trade Union Confederation vowed that activists would block roads across the nation if the amendments are approved.

At the end of the protest, the one hundred people managed to break through the police lines, but no violence occurred.