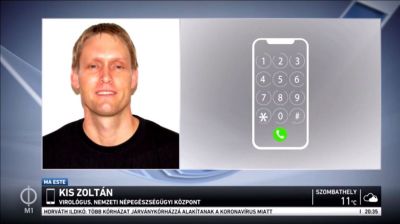 Researchers at Hungary’s National Centre for Public Health (NNK) have become the first in the country to successfully isolate the new coronavirus that causes the COVID-19 disease, local media reported on March 17.

The breakthrough will allow scientists to begin developing a vaccine against the virus and to test various therapies, chief medical officer Cecilia Muller told a press conference. The team at NNK’s national security lab that isolated the virus was led by virologist Zoltan Kiss.

The number of confirmed cases of COVID-19 in Hungary reached 50 on Tuesday. Of the confirmed cases, 39 are Hungarian, nine are Iranian, one is British and one Kazakh, according to the official website.

The rate of new infections was in line with NKK projections and medical experts expect the number of coronavirus patients to reach hundreds in the coming days.

Late on Monday, the second patient treated with Covid-19 recovered. The Iranian citizen in question has been discharged from hospital. One patient has died and two have recovered so far. A total of 1,436 tests have been conducted.

The chief medical officer said that test laboratories have been significantly increased and the government will accelerate laboratory procedures in testing. Anybody showing symptoms of pneumonia for unknown reasons will be screened for coronavirus. Experts criticised the lack of available screening.

The government has not given detailed figures on the cases geographically and the age of those infected.  When asked about this in the press conference, the chief medical officer said the aim was to fight the epidemic rather than to cause panic. She also said there was a sufficient number of ventilators in the country, with more to be purchase.

As Hungary is bracing for the spread of the virus, the government has designated new hospitals as quarantine centres and “epidemic hospitals” in addition to Budapest hospital, where currently most of the people are treated.

GPs aged above 65 will not participate in direct patient services and the work will have to be organised in a way to allow only younger doctors to meet patients. A decision has been made to postpone all non-emergency surgeries and the recruitment of more health workers has started and the acquisition of protective gear and ventilators are underway.

Hungary has declared a state of emergency last week banning public events and introducing a travel ban from Iran, South Korea and Italy. Since then the government took further measures, closing borders.

International passenger traffic has been suspended on roads as well as by rail and by air. Liszt Ferenc International Airport is open, but only to arrivals of Hungarian nationals returning home, he added. Shops, bars and restaurants are allowed to remain open until 3pm.

Lorries that enter Hungary may only travel on designated roads, stop at designated petrol stations and cross into Serbia, Ukraine or Romania at designated border stations, it was announced on Tuesday.

On Tuesday morning 60-70 Romanian and Bulgarian motorists blocked traffic at the Hegyeshalom border station at the Austrian-Hungarian border in an effort to persuade the Hungarian authorities to open the border as they were stranded in Austria.