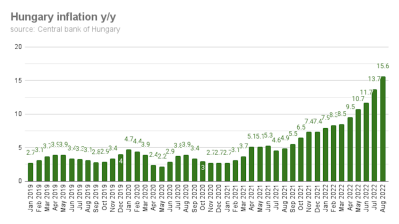 / bne IntelliNews
By bne IntelliNews September 9, 2022
Hungary’s annualised CPI accelerated to 15.6% from 13.7% in July (chart), the highest since May 1998, driven by higher food and consumer durable prices, according to data from the Central Statistics Office (KSH) on September 8. Core inflation rose from 16.7% to 19% in the same period. Consumer prices rose 1.8% from the previous month.

The price increase was broad-based, with 96 of the 140 of goods and services in KSH's consumer basket showing double-digit growth and 35% rising more than 20%.

The pace of food price growth continued to edge higher, up 30.9% y/y, despite the price freeze of half a dozen foodstuffs. The price of poultry climbed 40.4%, bread prices jumped 64.3% and dairy product prices increased by 54.7%. Hungarian consumers have already begun to scale back on food purchases, according to the latest retail data.

Some analysts expect the government to unwind the price cap on half a dozen food staples, that includes pork, cooking oil and flour after it expires in mid-October levels, which could further boost inflation.

The data show consumer durable prices increased by 14.8% and that of services by 7.7%.

Prices in the category of goods that includes vehicle fuel rose 11.9% as motor fuel prices increased by 6.2%.

The government has capped prices at the pump at HUF480/litre (€1.2) for both petrol and diesel since November 15. Vehicles with foreign number plates were earlier excluded from the measure, and from late July, corporate vehicles registered in Hungary also became ineligible.

Harmonised CPI, adjusted for better comparison with other European Union member states, was 18.6%.

In its monthly analysis, MNB said the rise in headline inflation was mainly driven by an increase in food prices, while core inflation climbed on processed food prices

The MNB's measure of core inflation excluding indirect tax effects – a bellwether indicator of underlying inflation – rose to 18.9% in August from 16.6% in the previous month. The central bank's indicator for demand-sensitive inflation, which excludes processed foods from core inflation, increased to 14.2% from 12.6%.

The KSH said the impact of subsidy cuts unveiled by the government in July would first show up in September data, putting further upside pressure on inflation. The MNB estimates that this could reach as much as 3pp.

At the end of August, the Hungarian National Bank raised the base rate by 100bp to 11.75%, the highest in Central Europe, to curb inflation.

Policymakers have pledged to continue tightening monetary conditions as long as inflation keeps rising to rein in high inflationary expectations, and announced other measures to reduce excess liquidity in the market. The hawkish tone helped firm the forint, the region's worst-performing currency due to Hungary's high reliance on Russian energy imports and uncertainty over access to European Union funding.

Analysts expect consumer prices to climb further in the coming months as uncertainties over price caps remain. ING Bank analyst Peter Virovacz projects the government to gradually phase out the price freeze on fuel, in place since November 2021, which could lift headline inflation to over 20% in October.

Turkish official inflation calculated at 83% y/y for September
1 hour ago
Poland’s inflation unrestrained in September at 17.2%, flash estimate shows
8 hours ago
Russia’s industrial output decline slows to only 0.1% in August
3 days ago
Poll shows Putin's popularity took hit in September but remained as high as 77%
3 days ago
Russia on track to have a record-smashing grain harvest
5 days ago