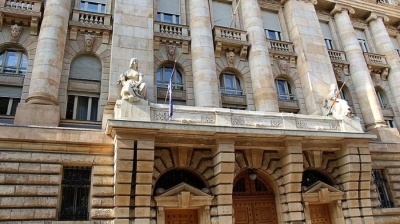 Hungary’s credit boom is expected to slow as some of the factors contributing to growth are not sustainable, Capital Economics said in a note.

The recovery in the Hungarian private sector credit market has been an important driver of GDP growth in recent years, which continues to beat analysts’ estimates. Hungary has shown resilience in an unfavourable external environment, as growth has been spurred by rising household spending and buoyant investments. Analysts opine that growth may have peaked at 5.1% in Q2, the highest in the EU.

The detailed breakdown by sectors will be known on August 30, but economists expect the two main drivers of expansion to slow. Hungary has managed a creditless recovery after the crisis, when households and companies were burned by foreign currency loans. Risky non-forint loans have since been phased out and indebtedness remains low relative to GDP, while saving rates are high.

Hungarian banks continued to expand their balance sheet last year, thanks to growth in lending. Household lending picked up to the highest rate since 2010 and credit to non-financial corporations (NFC) is rising at 15% y/y, the fastest pace since 2008. Capital Economics estimates that that the rise in lending since 2016 has increased the level of investment by over 10%.

As outstanding loan per GDP is just over one-third of the EU average, Hungary's central bank, the MNB, sees no risks in the current pace of credit expansion. Borrowing in 2018 as a proportion of households’ disposable income was only half of the level registered in 2008, which reduces the risk of excessive indebtedness. The central bank has also put in place debt cap rules and pushed banks to replace variable interest rate loans with fixed-rate loans to further reduce risks.

Hungarian banks also managed to reduce the share of non-performing loans (NPLs), which have fallen from a peak of 17% of gross loans in 2013 to just over 2% in Q1.

Capital Economics expects credit growth to slow as conditions are likely to get less accommodative. The central bank is expected to gradually tighten monetary policy and raise rates and growth in retail spending and investments are set to decelerate.

Next week’s rate setting meeting of the MNB could contain a dovish shift due to the changes in the global environment.

The current pace of wage growth, above 10%, is unsustainable and employment growth should grind to a halt, leading to a slowdown in credit demand. Weakness in the euro-zone area will take toll on manufacturing, causing credit growth to slow in the corporate sector, Capital Economics said, which identified two risks if the credit boom should continue.

Debt service costs could rise if the central bank starts tightening rates. The consensus view by analysts is that this won’t happen before 2020. The share of new home loans with over one initial year of interest rate fixation has risen considerably in recent years, but the share of variable interest rate loans in the total stock of mortgage loans make up the majority. Rising rates would impact these lenders negatively.

The credit boom could also further inflate asset bubbles. Signs of overheating in the property market has appeared. Prolonged credit growth could sow the seeds for a sharper correction further down the line, Capital Economics warned.