How far will China go to support Russia? 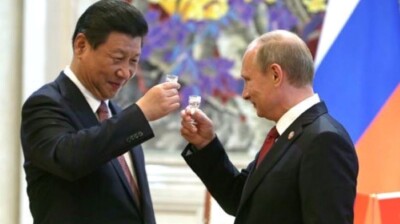 Western leaders have been looking to Beijing in the hope of persuading China – as Russia’s most powerful ally and key trading partner – to use its influence on Russia over Ukraine.

First US diplomats urged China to persuade Russia not to use nuclear weapons in Ukraine. Next, German Chancellor Olaf Scholz was in Beijing on November 4, where he urged Chinese President Xi Jinping to use his influence to persuade Russia to end the war in Ukraine. The two leaders also agreed that Russia’s talk of using nuclear weapons is "irresponsible and highly dangerous”, Scholz disclosed.

However, while saying Beijing supports Ukraine’s sovereignty, Xi has refused to condemn the invasion, and China does not so far appear to have used its influence on Russia to help bring an end to the war. Instead, the two countries are increasingly aligned as Russia reorients its trade eastwards, and also seeks to build relations with countries outside the Western sphere of influence.

On a webinar organised by the Centre for European Policy Studies (CEPS) think-tank on October 27, Huiyao (Henry) Wang, founder and president of the Centre for China & Globalisation, argued that part of the reason for China’s alignment with Russia is actions by the US such as the decision to boycott the 2022 Winter Olympics in Beijing.

China can’t be expected to “line up with the US because the US put China as its No. 1 rival”, Wang told the webinar ‘After the CCP Congress: Will China’s approach to the Russia-Ukraine war change?’

However, panellists from Western countries disagreed. Bonnie Glaser, director of the Asia Programme at the German Marshall Fund of the United States, said she does not think US policy has been the primary factor driving China and Russia together.

“These are two leaders who share a world view. They want to decrease US influence, change the international order to make it more favourable to their interests,” she told the webinar.

She also criticised the Chinese lack of action on Ukraine. “China could step up and play [a] more responsible role in the Ukraine crisis; instead they looked on from afar and watched Russia slaughter civilians. By not taking actions it is in fact supporting Russia.”

Bruno Maçães, senior advisor at consultancy Flint Global and former Portuguese secretary of state for European affairs, said the “lines are hardening” in the EU’s relationship with China too, as discussions in Brussels are “moving towards a world where China is seen as a systemic rival, no longer a partner or economic competitor”.

Part of that is China’s position on Ukraine which, Maçães says, was “poorly received in Europe”. “Fundamentally, China is aligned with the Russian position. I understand why – they don’t want to contribute to the US effort and they may want to see the US sink deeper and deeper into this problem.”

He contrasts China’s position with that of other nations in the global South – a region Russia is trying to woo; Indonesia, for example, has pointed out Russia’s violation of international law.

The limits to no limits

Shortly before Russia’s invasion of Ukraine, Beijing and Moscow signed a statement saying there were “no limits” to co-operation between the two countries.

However, panellists agreed that there are in fact limits – such as if Russia were to choose to use nuclear weapons in Ukraine.

“I don’t think Russia and China ever had a no-limits partnership. There are some limits. The things that are important the two leaders agree on, but not everything,” said Glaser.

For Wang, nuclear weapons would be the bottom line. “If [the war] goes to nuclear that is the bottom line for all of mankind and no country would tolerate that. I can’t speculate on what China would do but it can’t cross the red line there.”

Andrey Kortunov, director-general of the Russian International Affairs Council (RIAC), said he sees only two scenarios in which China might change its current “neutral position” in the Russia-Ukraine conflict, the first being if Russia used tactical nuclear weapons. That would “force China to take a much stronger position on Ukraine. This is one of the considerations in the apparent unwillingness of the Russian leadership to consider this.”

On the other hand, he said, “If there was a direct military clash between China and the US, it would be a game-changer and might trigger much closer co-operation between Moscow and Beijing on general issues.”

Weaker… but not too weak

While relations between the two leaders appeared friendly at the Samarkand summit of the Shanghai Cooperation Organisation (SCO) in September, Putin acknowledged China had raised “questions and concerns” about Ukraine.

Still, with the recent 20th National Congress of the Chinese Communist Party indicating that Xi is likely to remain in power in China for the foreseeable future, Beijing would likely want to preserve the relationship with Putin-led Russia – rather than taking a chance on another Russian leader who might be pro-Western.

“I don’t see any serious effort to end the war, though it is in China’s interest to have war ended, but not with Russia as the loser. The worst outcome for China would be if Russia loses its previous gains, especially Crimea, or if Putin loses power,” said Glaser.

While anti-war protests have been harshly repressed, there has been speculation since the war started that there might be a palace coup if the war becomes too damaging to Russia.

China is not seen as having any interest in getting more closely involved in the war in Ukraine. However, Russia’s isolation from the West following the invasion raises the question of whether China might ever step in to actively help Russia.

“China could change to an even deeper alignment with Russia if there was a danger of Russian collapse in Ukraine or regime change in Moscow,” said Maçães, noting that “Beijing is comfortable with Putin”.

“China is not interested in seeing Russia being weakened or humiliated too much. Putin is clearly the best option Xi has. I think China would cover the extra mile to make sure Russia gets out of the conflict with relatively limited damage.”

No matter who is in charge, Kortunov said that the “two countries still have common interests, a long common border, and mutual trade that is likely to increase as a foundation for their relationship.”

However, Kortunov added, “it is clear both are trying to keep their foreign policy portfolios diversified”.

The relationship between Russia and China was asymmetrical even before Russia because the target of tough Western sanctions, which has led to discussion of Russia becoming China’s ‘junior partner’ in future.

Kortunov forecast that in the two countries’ bilateral relations Russia is likely to be the “deal taker not the deal maker”, and that Russia should have “no illusions” about the level of Chinese support. Beijing might “support Russia in its standoff with the West but not in its military operation in Ukrainian territory”.