HEATMAP: Russia and Ukraine battle it out for title of most corrupt country in Europe 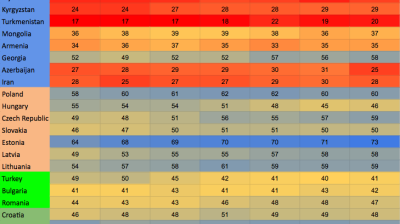 The corruption scores of both Russia and Ukraine put them near the bottom of the league while Belarus has made surprising progress / bne IntelliNews
By Ben Aris in Berlin January 30, 2019

Russia recaptured the dubious title of “most corrupt country in Eastern Europe” after it slipped three places in this year’s Transparency International Corruption Perceptions index, falling from 135 place in 2017 to 138 last year out of a 180 countries surveyed.

Ukraine on the other hand has shed the most corrupt title it held in 2015 and improved its standing, rising from 130 place in 2017 to 120 now, buoying its supporters’ claims that progress is being made.

Looking at the actual corruption scores, which run from 1-100 with 100 standing for no corruption at all, then the picture is less encouraging. Russia’s score fell one point from 29 to 28, whereas Ukraine’s score improved two points from 30 to 32.

Ukraine has been pressured into attacking corruption by its international donors, which have insisted on a new anticorruption system.

The new National Anti-Corruption Bureau of Ukraine (NABU) is the investigative part of a triumvirate that also includes the Special Anti-Corruption Prosecutor’s Office (SAPO), which carries out prosecutions in parallel to the General Prosecutor’s Office, but is also entirely independent from the government’s control. And at the end of 2018 the government finally dropped its resistance to an anti-corruption court (ACC), an independent court to hear the cases investigated by NABU and prosecuted by SAPO.

However, the ACC is still not functioning and Ukraine has yet to jail any high official on corruption charges. Indeed, the first “big fish” to be indicted by NABU was Roman Nasirov who was arrested in 2017. Nasirov is the head of Ukraine’s financial service and close to President Petro Poroshenko. Not only was Nasirov never prosecuted, but in January a court ruled that he could have his old job back and he has just registered as a candidate in the upcoming presidential elections.

Russia has a bad image problem when it comes to corruption, but it has also been cracking down on the cancer and made some progress. Presidential Ombudsman for Business Boris Titov was appointed a corruption tsar and there has been some progress as part of the general drive. Some 10,000 policemen have been sacked on graft charges, several regional governors jailed and even a sitting minister, Alexey Ulyukayev, was sent to prison after he was caught red handed accepting a bribe.

And the Transparency International results have to be taken with a pinch of salt as the index only measures its panellists’ perception of corruption, not actual corruption, so the results remain subjective.

A quick look at the latest bne IntelliNews Heatmap of Transparency International corruption scores over the last seven years underlines the point: Russia and Ukraine remained more or less tied in the red “highly corrupt” category, but are still noticeably better than nearly all the countries of Central Asia.

The surprise performance from these two regions is Belarus that has noticeably improved its score since 2012, rising from 31 to 44 this year. That puts Minsk ahead of most of the countries in the Balkans and just behind those in Central Europe.

Georgia is another standout success from its neighbours and Estonia is  peerless in the region, ranked 18th in the survey and placed alongside the mature democracies of Belgium and Ireland. The next highest is Poland with a score of 60 that ranks it 36th, heading a pack of the more progressive countries from Central Europe, but even these countries still have a serious corruption problem that remains a work in progress. 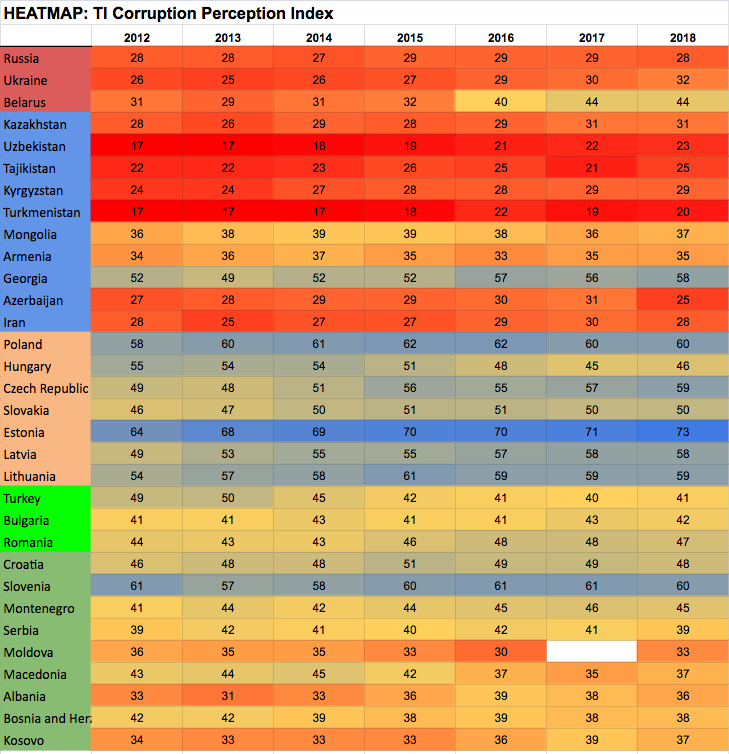