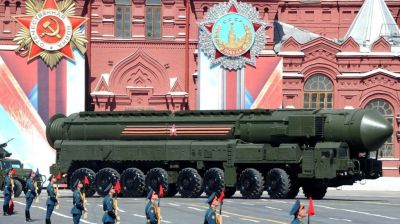 The brakes were supposed to have been applied on defence spending in the draft 2017-19 budget.
By Nick Allen in Warsaw October 28, 2016

Russia's military campaigns and interventions in Syria and Ukraine are clocking up billions in costs and there is still more hardware to develop, buy and deploy as the country increasingly squares up to the West, putting immense strain on the national budget and reserves.

Parallel to the quest to boost tax revenues, the finance ministry authors of new amendments to the 2016 budget figured out how to cover much of the current and coming military expense: by raking out RUB800bn ($12.7bn) from areas such as investments, education, health care and pensions and secretly shovelling it into defence to pay off the credits of Russian contractors.

According to the new plan, these will extend the Kremlin's armaments drive, even though the brakes were supposed to have been applied on defence spending in the draft 2017-19 budget. Meanwhile, welfare spending will also grow, helping to keep the lid on public disatisfaction at shrinking services.

“We see an opportunity to repay loans taken by the companies, to relieve them of the debt burden and make it possible to reduce debt relative to revenue in order to give them an opportunity to raise loans again,” Finance Minister Anton Siluanov told Russia's parliament this month as he presented the amendments to the budget, much of which will as usual be covered with funds released towards the end of the year.

Battle for the purse strings

As well as meeting the defence instructions of President Vladimir Putin, that would also allow enterprises to shift some capacity toward civilian production, Siluanov added in comments that observers say actually signal a defeat for his ministry. Having battled to balance the books this year amid low revenues from oil, Siluanov’s team has been overruled by the government, which now wants to increase the year’s overall spending by RUB304bn to RUB16.4 trillion ($4.8bn to $261bn). In other words, the men in black or wearing epaulettes won the fight for control of the state's finances.

Regardless of the difficult economic situation, the Kremlin has been able to maintain the political priorities it previously set – focusing on further militarisation of the country, while ensuring social stability, with these goals accounting for around 60% of budget spending, the OSW adds. “[Russia’s] economic policy has been subordinated to these priorities, one proof of which is seen in falling investments and outlays on human capital development (the health service and education).”

In the black books

A large part of this giant spending thimble trick in recession conditions is the so-called black budget: classified areas of spending, typically on security, where the public has no oversight. This will receive an additional increase by RUB679bn, while unclassified expenditure will be reduced by RUB374bn.

The money being reallocated to defence includes RUB167bn ($2.65bn), or almost half of the pension funds in the presidential reserve in 2016, Siluanov said separately, prompting some  objections. “The state is essentially reanimating the saying of the 1930s, ‘cannons instead of butter’, only now it is the butter of the future pensioners who as it is can only count on a very meagre pension,” Vedomosti daily wrote.

Six years ago, every tenth ruble of federal spending was spent on secret budget items, but this year it is one in five, according to the amendments. If the changes are passed by parliament, classified spending will grow RUB680bn over the initial budget, to RUB3.7 trillion (over 22% of overall spending), leaving taxpayers even more in the dark as to how the money is being used.

“As years have passed, it’s become less and less clear where Russian taxpayer money is going,” wrote Georgiy Neyaskin of Slon magazine. “This is not because of corruption or a lack of transparency, but because an increasingly large percentage of spending is being classified by officials. The classification mostly concerns federal spending on defense, intelligence, and other agencies dealing with security.”

Yet so effective has the state propaganda machine been in convincing the public that the country faces a rising security threat from its old adversary Nato, plus the perennial fear of terrorism, that half of the population agrees that the military should get the lion’s share.

Russia’s VSIOM polling organisation this month published a new survey that showed that “in the current difficult economic situation, every second person (50%) would give priority to expenditure on maintenance of the defense capability of our country to the other areas. One in three (35%) believes that you must first ensure the social needs of the country - to raise an adequate level of education and medicine –  and after that to focus on defense and security.”

“Regardless of the difficult economic situation, the Kremlin has been able to maintain the political priorities it previously set – focusing on a further militarisation of the country, while ensuring social stability (these goals account in aggregate account for around 60% of budget spending),” the OSW in Warsaw adds.

The wild card may still prove to be whether Russia’s reserves can last until the Western sanctions over Ukraine are lifted, which is now expected in 2018. The budget increases will eat away up more of the rainy day money. At the end of 2016, only $17bn will remain in the Reserve Fund (compared with $50bn in January 2016), and $72bn will be left in the National Welfare Fund.

The man who shaped Russia’s budget from 2000-2011, former finance minister Alexei Kudrin, says that while “Their gradual decline will start next year”, the sanctions are hurting Russia hard.

“I mention this figure everywhere - from 0.8% to 1% of non-received GDP growth. It was nearly 1% in the first two years and slightly less now,” said Kudrin, a liberal economist who resigned five years ago partly in protest at high defence spending, and now advises his country’s leadership to take a less confrontational stance internationally.

He is still very respected in the Kremlin and had been rumoured to be on his way back into a senior policy-making role. But for now, Russia isn’t ready to back down to anyone on the world stage, despite the economic cost.

“Sanctions seriously affect our economy,” Kudrin said, but noting that "they are not valid as a political tool; it does not work and has not influenced on our policy at all”.