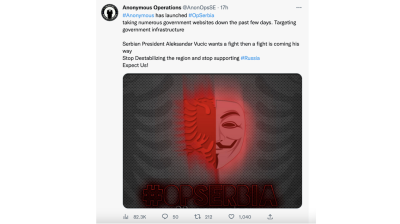 Hacker collective Anonymous has claimed responsibility for a cyberattack on the Serbian defence ministry website.

The group has repeatedly sent threats to President Aleksandar Vucic since December, urging Serbia to stop its actions in Kosovo. The threats came amid an escalation of the situation in northern Kosovo where local Serb erected barricades in protest against the authorities in Pristina.

As of the afternoon of January 5, the Ministry of Defence website was not reachable.

“Serbian President Aleksandar Vucic wants a fight then a fight is coming his way. Stop Destabilizing the region and stop supporting #Russia. Expect Us!”

Another tweet addressed the president as “fascist Aleksandar” and told him not to "waste time with dogs”.

Vucic responded by posting a video of himself playing with his dogs on on Instagram with the caption” "We are getting ready to fight against anonymity.”

“Serbian President Aleksandar Vucic made fun of the threat from the world's largest hacker community #Anonymous,” said a response from one of the community accounts.

“Aleksandar Vucic, f*** around and find out?” another poster added.

Employees claim Bulgarian Facebook moderators controlled by Russia
2 days ago
EWDN: A year in review – How Ukrainian tech resisted the war in 2022
4 days ago
Pictures of Serbian President Vucic isolated at Davos go viral on social media
7 days ago
Russia to slash AI development support
8 days ago
Romania’s Digitail raises €11mn to scale up software for vet clinics
14 days ago