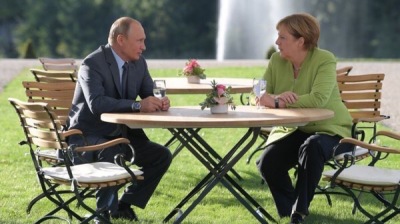 "As far as the Russian vaccine is concerned, I share the opinion that we should use any vaccine approved by the European Medicines Agency. But I would rather prefer European purchases. If there are no European purchases and no signs indicating their possibility, we will have to take the German path alone," she told reporters on March 18 after a meeting with heads of German regions to discuss anti-coronavirus vaccination in the country. "This is possible, and this is what we will do,” she added as cited by Tass.

As bne IntelliNews reported, the EU started the certification process of the Sputnik V vaccine in mid-January. Russia has finally sent all the documentation required and the COVID-19 vaccine is expected to be approved for use in the EU by the European Medical Agency by the end of May.

In the background the preparations for manufacturing Sputnik V in Europe are well underway.

The Russian Direct Investment Fund (RDIF), the Russian sovereign wealth fund that is behind the vaccine’s development, has reached agreements with companies from Italy, Spain, France and Germany to jointly produce Russia’s Sputnik V vaccine, RDIF CEO Kirill Dmitriev told journalists on March 16. It is not clear if work to create these production facilities had already started before the EMA approval or if it will only begin once the EMA signs off on the Russian vaccine.

Russia has surprised the world by coming up with a high-quality vaccine very quickly and in meantime has developed two more. Russia has approved CoviVac, its third coronavirus vaccine, for domestic use, Prime Minister Mikhail Mishustin said on state TV, although large-scale clinical trials have not started yet, which scientists say could be even more effective than Sputnik V, which has a 91% efficacy score.

While Russia struggled to create the production facilities to manufacture the vaccines to begin with, according to some reports there is now a glut after so many Russians have refused to take the vaccine. At the same time, the epidemic is now in retreat as so many people have been infected and Russia is expected to reach “herd immunity” levels of 70% of the population with anti-bodies as soon as August, according to some reports.

Merkel also sought to allay public fears over the UK-Swedish company AstraZeneca vaccine, saying she would like to use this vaccine, despite controversial information about its possible negative effects.

A dearth of vaccines in Germany has caused a public scandal, after the EU bureaucratic public procurement rules meant that Europe failed to order enough vaccines to inoculate its population. Merkel promised that the German authorities were committed to launching a large-scale anti-coronavirus vaccination campaign this summer.

"I think that we have very good chances of fulfilling our promise to give every citizen an opportunity of becoming vaccinated [against COVID-19] by the end of this summer," she said, adding that a lot depends on how many doses of vaccines will be supplied to the country.

Earlier, the German government expressed its readiness in principle to use vaccines developed outside the European Union. Heads of several German regions, including Bavaria, Berlin, Brandenburg, Mecklenburg-Vorpommern, Saxony, Saxony-Anhalt and Thuringia, urged the putting aside of political and ideological considerations about the use of foreign vaccines, including Russia’s Sputnik V, Tass reports.

Russia’s Sputnik V is ranked among the world’s top three most popular coronavirus vaccines. As of today, it has been registered for use in 50 countries worldwide with an overall population of more than 1.3bn.

After slating the Russian vaccine and questioning its safety, a German decision to buy or make Sputnik V would be a huge PR victory for the Kremlin and go some way to undoing the “Russia is just a giant petrol station” stereotype the country has been branded with. The Kremlin has made great use of the soft power good will it can earn from offering its vaccine to other emerging markets that have been locked out of procuring the Western-made vaccines that have largely been snapped up by the developing world: countries with 16% of the world’s population in the West have bought 50% of the supply of the other vaccines, according to reports. Russia, on the other hand, has offered Sputnik to most of its allies in the Commonwealth of Independent States (CIS) and Eurasia Economic Union (EEU). It has also entered into agreements to set up production in multiple counties including Turkey and Belarus which should come online shortly.