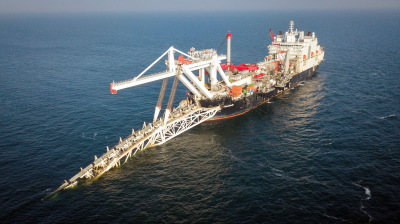 Construction of the Nord Stream 2 gas pipeline is now fully complete, Gazprom announced in a brief message on September 10, although how soon it will start pumping Siberian gas to Europe is still shrouded in uncertainty. In a briefing on September 8, Russian Foreign Ministry spokeswoman Maria Zakharova said the timing of the launch all depended on the decision of German regulators.

Russia is putting pressure on German regulators to get the Nord Stream 2 operating company certified as an independent operator, which is a necessary step for the pipeline to start pumping gas. But under an EU court ruling, which Gazprom recently failed to get overturned in a German court, doing so would violate the bloc's rules on the unbundling of gas transport infrastructure from supply. This could mean Gazprom has to spin off Nord Stream 2, which would likely result in delays that would prevent the pipeline coming on stream this year as Russia hopes.

Gazprom had hoped to complete Nord Stream 2 before the end of 2019. The pipeline's construction was held up by permitting delays in Denmark in 2019, and sanctions that the US imposed at the end of that year that forced Swiss pipelayer Allseas to pull out of the project. Russia responded by deploying its own pipelaying vessels to finish the job.

Uncertainty about when Nord Stream 2 will start bringing Siberian gas to Germany comes as European gas prices are at record highs, amid supply constraints and a post-coronavirus (COVID-19) recovery in demand.

"It is now clear to everyone, including opponents of Nord Stream 2 that desperately opposed its construction, that it is simply impossible to stop it and it is time to stop hampering this important project," Zakharova said. "The time has come to agree on reasonable, mutually beneficial parameters for the operation of the gas pipeline."

"We expect that millions of European consumers will soon be able to receive Russian gas via the shortest, most economical and environmentally friendly route," she continued. "The carbon footprint of gas transportation through Nord Stream 2 is more than five times lower in comparison to alternative routes. This is known."

The spokeswoman was likely drawing a comparison with the Soviet-era Yamal-Europe and Ukrainian pipelines that ship Russian gas to Europe. Russia's TurkStream pipeline, launched at the start of last year to carry Russian gas to Europe via Turkey, generates a similar carbon footprint to Nord Stream 2, Gazprom has said in the past.

Much of the criticism levelled against Nord Stream 2 is that it is political in nature, potentially serving as a tool for Moscow to exert influence in Europe. But Zakharova reiterated Russia's position that the pipeline should only be viewed in economic terms.

"Nord Stream 2 is a purely economic project, and Russia has no plans to use it for any other purpose," she said. "We sincerely hope that Nord Stream 2 will cease to be the subject of all sorts of political speculations, bogus stories, information campaigns and a pretext for illegal restrictive measures, and will vanish from such a confrontational agenda altogether."

Zakharova also stressed that Russia was prepared to continue gas transits via Ukraine, as long as the terms are suitable. Kyiv has argued that if Russia ends gas transits via Ukraine when the current contract expires at the end of 2024, Moscow will have no reason not to ramp up its aggression in the eastern Donbas region, warning that the situation could devolve into all-out war between the two countries.

"We are ready to continue gas transit via Ukraine, but this issue is purely commercial," the spokeswoman said. "It depends on many factors, including the volume of future European purchases and the competitiveness of alternative routes."

Gazprom has complained recently that Ukraine is not offering favourable terms for the transit of additional gas beyond contractual terms, although the company has faced criticism for intentionally withholding some supply, exacerbating shortages on the European gas market.