Robert Anderson in Prague and Vienna -

The latest severe bout of emerging market turbulence has capped what has been a very trying 12 months for funds investing in Central and Eastern Europe/Commonwealth of Independent States (CEE/CIS), and could well snuff out early signs of a revival.

Renewed fears of imminent monetary tightening by the US Federal Reserve (which has pushed up the dollar), together with stagnating growth in China and the devaluation of the renminbi, ricocheted through other emerging markets in August, several of which – notably Brazil – were already in deep crisis. Other currencies plunged – the JPMorgan Emerging Markets Currency Index fell to its lowest level since it was founded in 2000 – and commodities, bond markets and equities suffered, with the MSCI Emerging Markets Index falling to a four-year low.

Investment in CEE/CIS was already suffering from the woes of its two biggest markets, Russia and Turkey. The current emerging markets turmoil has only magnified concerns over Russia’s geopolitical isolation and its dependence on oil. Similarly for Turkey, the turbulence has revived concerns over its domestic political instability and its external foreign exchange vulnerability.

Russia’s invasion of Ukraine followed by Western sanctions, together with falling oil prices and the depreciating ruble, had already depressed the Russian economy and assets. Funds investing in Russia had a disastrous second half of 2014, falling 39.8% in value, according to EPFR Global, though they came back strongly in the first half of 2015, recovering 22.1%.

Many US investors, in particular, pulled out of the Russian market, and turned bearish on the whole region, even if Central Europe’s trade dependence on Russia is now low. In July, the Templeton Russia and East European Fund – founded by legendary emerging markets investor Mark Mobius – said it would liquidate its assets, partly because of Russia's involvement in Ukraine and the threat of further sanctions. “Russia-Ukraine was very unfavourable for the whole region,” says Margarete Strasser, senior fund manager of CEE fixed income for Pioneer Investments.

Angelika Millendorfer, head of East Europe equities at Raiffeisen Capital Management, says that Ukraine has been a big issue for equity retail investors, leading to moderate outflows. “The last year has been very difficult for East European funds,” she says.

In the second half of 2014 there was a net outflow of $3.87bn from funds investing in Emerging Europe, according to EPFR Global. This slowed to a further net outflow of $1.21bn in the first half of this year. Equity funds have fared worst, losing $2.15bn in the second half of last year and $802mn in the first half of 2015; fixed income funds lost $719mn and $414mn respectively.

In this environment it is not surprising that the winners of the bne IntelliNews Fund Survey 2015 were those that did not invest in Russia. The winner of the equity fund category is the Danske Invest Eastern Europe Convergence ex Russia fund, with a return of 9.37% in the 12 months to the end of June. Its performance compares with an overall fall of 25.7% in net asset value in the second half of 2014 for equity funds investing in Emerging Europe, followed by a rise of 9.3% in the first half of this year.

In the fixed-income category the winner, with a return of 3.37%, is the Conseq Invest New Europe Bond Fund, which focuses on local currency bonds from emerging EU members and candidate countries. According to EPFR Global, fixed-income funds investing in Emerging Europe were flat in the second half of last year (up 0.45%) and barely up in the first half of 2015 (up 1.8%).

The success of the Danske Invest and Conseq funds reflects the fact that in a bad year, Central Europe’s performance has been decent. Eurozone quantitative easing has been supporting growth and keeping regional interest rates low, but not weakening Central European currencies, which have remained resilient in the current turbulence. Bond yields are mostly still attractive compared to Western Europe, and do not share the risks of Russia or Turkey, particularly now that a Grexit has been averted – for the moment.

“Central Europe has better growth and the risk is still limited compared to other markets,” says Stefan Pregnolato, head of CEE portfolio management at Pioneer Investments. Strasser of Pioneer concurs: “Central Europe is the best positioned at the moment among global emerging markets.”

In terms of portfolio allocation, Erste Bank recommended in July moving back into equities, as bond yields rise on expectations that monetary easing is coming to an end. “We would argue that yields have started to rise for a good reason, with expectations on inflation and (finally) nominal growth behind the weaker bond prices. This matches our theme of CEE posting a strong economic recovery, even outperforming other emerging markets,” it said in its CEE Equity Strategy Report.

Among regional picks, Poland has long been the favourite, though Erste recommends being underweight because of the strong risk of the populist Law and Justice Party winning the general election in October.

Hungarian assets have been the star performer over the past 12 months, boosted by stronger-than-expected economic growth, as well as interest rate cuts. Pioneer says Hungary was the best performing local currency fixed-income market, registering a 3.8% increase in value in the year to the end of June. However, it is also seen as one of the most vulnerable in the region to a rise in US interest rates because of its external imbalances.

Looking forward, one of the big issues for fund managers is when the cheapness of Russian assets will outweigh the continuing risks of further geopolitical or economic bad news.

Fund managers have already started putting a toe back into the water. According to EPFR Global, after a net outflow of $32mn in the second half of last year, there was a positive inflow of $331mn into all funds investing in Russia in the first half of 2015. In an interview conducted just before the recent turbulence, Millendorfer of Raiffeisen says: “We are approaching a bottom when Russia becomes quite interesting.”

Strasser of Pioneer is one of those bold fund managers. “We are starting to step in again” with a neutral weighting on Russia, and that hard currency bonds in particular are becoming “very attractive”. However, she cautioned that “finding the bottom is very difficult” – a judgement the recent turbulence will only have confirmed.

The second big question is how serious the impact of the eventual rise in US interest rates will be. The hike will make US assets more attractive and could hurt emerging market companies that have borrowed in dollars. A report by the Institute of International Finance in May said that aggressive action by the Fed would be “the worst of all worlds” for emerging market capital flows, bringing higher global interest rates, less favourable financing conditions and mediocre growth in mature economies.

Millendorfer of Raiffeisen is sanguine. “This issue has been with us for two years,” she says. “This has already had a big negative effect, so a lot of this has already been seen. When it finally comes it will not have been a surprise for anyone.”

However, Heinz Bednar, chief executive of Erste Asset Management, says it remains a worry, even in Central Europe. “This is our big challenge today,” he says. “This is one of the reasons why we try to increase the equity part of our client portfolios.” 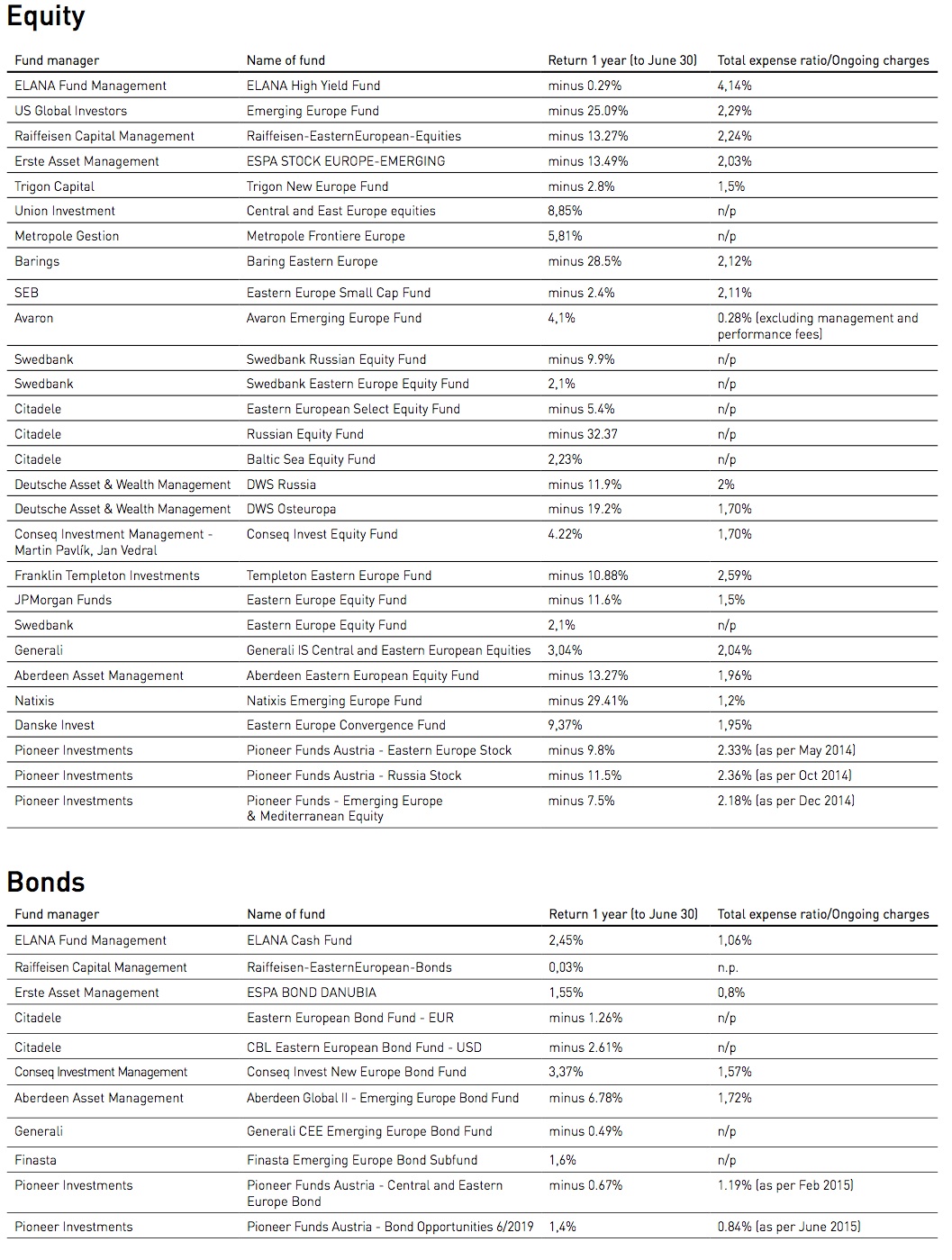