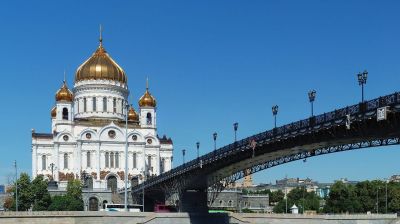 A new saviour may have been found for Russia's crisis-ridden banking sector in the form of the men in black from the Orthodox Church.

The Church is in talks to buy a controlling stake in Ergo Bank, RBC reported on January 12, citing sources close to the Moscow-based lender and the Church.

The semi-divine intervention followed a statement on Ergo Bank's website on January 11 admitting the lender was suffering from "liquidity problems". The bank, which has a Roman legionnaire motto meaning "You must, so you can", said it was on its knees looking for a new investor or a state bailout over the next two weeks.

"I ask all of our customers in these difficult times to treat current problems with understanding and not to prematurely terminate their deposit accounts," chairman of the bank Vyacheslav Barmin implored clients in the statement.

One of RBK's unidentified sources said the Church is interested in buying the bank to save money belonging to accounts opened by the dioceses. Moscow-based Ergo, which was set up in 1994, serves over 60 organisations drawn from 18 dioceses of the nation's Orthodox Church.

The bank's main office is located in Moscow's historic Kitai Gorod beside a church, where Ivan the Terrible was reputedly married to his his sixth wife Vasilisa Melentieva in the late 16th century.

The lender, which is the 311th largest in Russia with RUB6.5bn ($85mn) in assets, had been growing fast in recent years by opening new offices in the regions, boosting its capital and joining the Swift and Visa international payment systems.

Russia's Orthodox Church is led by Patriarch Kirill I, is renowned for his penchant for the good life. In 2012, Kirill made the headlines after the church photoshopped a $30,000 Swiss watch off his wrist but forgot to remove its reflection from the shiny table he was sitting at. Church critics had a field day, declaring the 'disapperaring watch' a 'miracle.' Kirill denied wearing it but was later forced to admit it was his. He claimed it was a gift from a wealthy friend and that it had been sold and the money given to charity.

The Orthodox Church has had its hands burnt once before when it comes to the banking sector. In the 1990s, it was involved with a bank called "Old Bank", which later became Sofrino. It was run by a group of men with who were very close to the late Patriarch Alexy II and the current head Kirill.

Sofrino handled the church's assets and money given by the state and other sources for restoring churches. It also dabbled in loans and investments but things soured and its license was revoked by the Central Bank of Russia (CBR) in 2014 because it had almost four times more debt than assets.

Before becoming patriarch, Kirill, a former KGB agent, was involved in exploiting the church's tax-free status by importing alcohol and cigarettes and selling them at lower than market value prices.

Kommersant and other newspapers accused Kirill of profiteering and abusing the privilege of duty-free importation granted to the Church in the mid-1990s and dubbed him the "Tobacco Metropolitan". Kirill's personal wealth was estimated by the Moscow News in 2006 to be $4bn.

Meanwhile, Ergo's shareholders will be praying that the central bank will allow them time to get their house in order. The CBR, led by Elvira Nabiullina, has been tough on marginal lenders but has shown some leniency to those banks with friends in high places.

Since 2013, a banking sector clean-up by the regulator has stripped licenses from over 200 Russian banks, 80 of these in 2015 alone, reducing the total number to less than 700. The CBR has been denying licenses to credit institutions suspected of unlawful operations and money laundering, as well as encouraging takeovers of weakly capitalised and troubled banks by larger players.