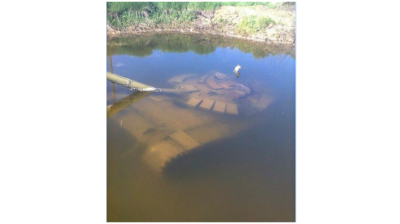 Russia's invasion of Ukraine was supposed to be lightening fast, but now a month has passed it doesn't seem to be going according to plan. / twitter
By FPRI BMB Ukraine March 25, 2022

Has the Russian army failed to fulfil its initial objective of a quick victory over Ukraine? This is what many observers suspect. The Wall Street Journal even suggests that Russian forces now have to resort to “plan B.” Dreams of a lightning victory, of taking the capital, or even of a triumphant welcome from the population, have had to be put on hold.  According to the newspaper, it’s now a question of seizing strategic territories, primarily in the south-east of the country, in order to force Kyiv and the West to officially recognise Ukraine’s neutrality.

Despite the relative lack of reliable information regarding the current state of the Russian Armed Forces (RAF) – particularly because of the continuous flow of information shared by Ukrainian media that is likely creating an exaggerated picture of Russian losses – it’s apparent that the RAF have stalled in recent days. Even the pro-Kremlin Russian tabloid Komsomolskaya Pravda published – and then quickly deleted – a report that the Russian Defence Ministry has recorded 9,861 military deaths since the start of its all-out war against Ukraine. The article also reported that 16,153 Russian soldiers have been injured.

On March 23, Nato released its own estimate of Russian casualties, tallying those killed, wounded, taken prisoner and missing at between 30,000 and 40,000 Russian soldiers, all of whom are no longer in any state to fight. By various estimates, between 7,000 and 15,000 Russian soldiers have been killed over the course of the four weeks of war in Ukraine.

Drawing attention to “Ukrainian harassment and counterattacks in many sectors,” military expert Michel Goya suggests that “the war is going through a period of general immobilisation and fragmented fighting. The Russian offensive effort is limited to the Izyum-Sievierodonetsk area (northern Donbas) and especially to Mariupol.”

But this is not necessarily good news for the Ukrainians, especially not for civilians. It seems that the more the Russian troops struggle on the ground, the more the Russian Army shells Ukrainian cities. Kharkiv, Mariupol and Chernihiv, for example, have suffered constant and severe shelling, but none of these cities are willing to surrender. Their resilience might pay off relatively soon: according to Goya, Russia used up half of its missile stockpile in Ukraine in the first three weeks. “The Russian missile campaign will hardly be able to continue at this rate for more than a few weeks,” he concludes.

OPINION: Belgrade’s EuroPride parade was a victory against the Kremlin

The triumph of love over hate showed most Serbian citizens want to live in the democratic world despite Moscow’s efforts.

NEMETHY: The dawn of a new era: more expensive energy and wages?

Psychologists say that the human brain suffers from dozens of different biases, perhaps one of the most important of these being “recency bias”. We tend to project the past into the future and Putin's war has radically changed that future.

Disparate interests of organisation’s member nations meant many major issues of the day could not even be discussed. But there was only one dominant member: China.

COMMENT: Armenia-Azerbaijan military escalation is a test for Russian status quo in the region

The new outbreak of fighting tests Russia's relevance in maintaining peace and stability in the South Caucasus and could endanger its growing alliance with Turkey.

ING: Energy price caps are appealing, but are not without risks
3 days ago
OPINION: Belgrade’s EuroPride parade was a victory against the Kremlin
4 days ago
NEMETHY: The dawn of a new era: more expensive energy and wages?
4 days ago
PANNIER: Putin arrived with little to offer an SCO summit that showed no real clout
6 days ago
COMMENT: Armenia-Azerbaijan military escalation is a test for Russian status quo in the region
9 days ago