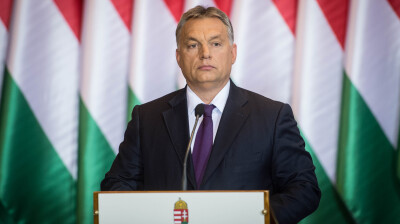 If Volodymyr Zelenskiy hoped to see a change of government across the Carpathians in Hungary, he’ll have to wait another four years after Viktor Orbán’s landslide victory in the recent election. / wiki
By FPRI BMB Ukraine April 7, 2022

If Volodymyr Zelenskiy hoped to see a change of government across the Carpathians in Hungary, he’ll have to wait another four years – all while enduring Viktor Orbán’s small, but near constant, jabs. Re-elected in a landslide victory for the fourth time running, the Hungarian prime minister did not forget to mention Ukraine in his victory speech, although not exactly as some might have expected.

Instead of talking about the atrocities seen in Bucha, which reverberated around the world, the incumbent made “a special mention for the Hungarians of Transcarpathia” – a reference to the Zakarpattia region of Ukraine, which is home to 150,000 ethnic Hungarians. Orbán then went on to list all his adversaries, spanning from EU bureaucrats and the international left, all the way to the American billionaire George Soros, and “even the Ukrainian president!” This mention of Zelenskiy was met by laughter among Orbán’s supporters gathered there that night.

Rather than trying to smooth things over with his Ukrainian neighbour, Viktor Orbán is increasing his attacks with each passing day. Ahead of the elections, he accused Kyiv of making a pact with the Hungarian left, which, if elected, would allegedly send troops and weapons to fight alongside the Ukrainian army.

“He will have to choose between Russia and the rest of the world,” Zelenskiy said about Orbán after the election. “He can continue to flirt [with Russia], he needs cheap energy resources, but it will not last long.” The Hungarian prime minister “is afraid of the Russian Federation's influence on his country,” Zelenskiy added.

This dispute continued on Wednesday, 6 April, with Hungarian Foreign Minister Péter Szijjártó summoning the Ukrainian ambassador to Hungary, arguing that the “Ukrainians have crossed all lines with their statements.”

By snubbing Zelenskiy, who is arguably the Western world’s most popular leader at the moment, Orbán has managed to attract a lot of attention. But this only serves to paper over Hungary’s increasing isolation on the European stage. And it’s certainly no reflection of Europe’s support for Ukraine. Orbán’s extremely soft condemnation of Russia has isolated him from his key partner Poland, which is at the forefront of support for Ukraine and the fight against Russia.

Czechia and Slovakia, who tend to keep their distance from Budapest within the Visegrad Group, have also shown strong support for Ukraine; Prague haas even sent old Soviet tanks to the Ukrainian army. Orbán’s loneliness is only further illustrated by his strengthened partnership with Aleksandar Vučić, the recently re-elected President of Serbia, and a notable Russian proxy in the region.

Russian men fleeing the draft are caught between suspected of being pro-Putin and Western closed-door policies
4 days ago
Sanctioned Russian diamonds are reaching the US consumer, but some are getting there legally – for now
5 days ago
EBRD: Reduced gas supplies and inflation to slow growth further in EBRD regions
5 days ago
ING: Eurozone PMI suggests the region may already be in recession
7 days ago
ING: Energy price caps are appealing, but are not without risks
12 days ago