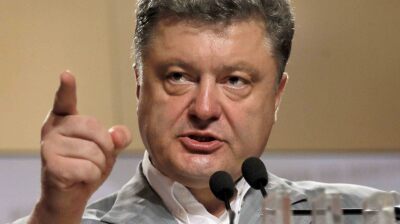 Ukrainian oligarch Ihor Surkis brought a $260mn claim against former president Petro Poroshenko in the UK High Court to try to recover money he lost in the 2016 nationalisation of PrivatBank. He lost.
By Ben Aris in Berlin September 24, 2021

The British High Court struck down a $260mn claim made by Ukrainian oligarch Ihor Surkis and his related companies against former President Petro Poroshenko and the former NBU governor Valeriya Gontareva on September 22 in an attempt to recover money lost following the nationalisation of PrivatBank in 2016.

Surkis is a business associate of the bank’s former owner oligarch Ihor Kolomoisky and had money on deposit in the bank at the time of its nationalisation. A bne IntelliNews investigation exposed that the former owners of the bank had drained it of hundreds of millions of dollars in cover story “Privat Investigations” in November 2016, which led to the National Bank of Ukraine's (NBU) decision to nationalise the bank a month later. A subsequent investigation by the regulator found a $5.5bn hole in the bank’s balance sheet.

The depositors, including Surkis, were bailed in to the nationalisation and lost what money they had on deposit at the bank at the time. They have been trying to recover that money via the courts ever since.

At the time of the collapse of PrivatBank Surkis was deemed to be a “connected person” to the bank’s owner Kolomoisky and so his deposits in the bank were bailed in and converted into equity of the bank. Then as the NBU ruled that the $5.5bn hole in the bank’s balance sheet meant the bank was insolvent, the shares in the bank were taken over by the state and the NBU pumped $5bn into the bank in a bail-out to prevent it from collapsing. Surkis lost all claim to his deposits in this process.

The nationalisation of the bust PrivatBank wasn’t, itself, controversial and was described by the then head of the International Monetary Fund (IMF), Christine Lagarde, as “an important step to safeguard financial stability.”

Surkis brought the case in London against Poroshenko, claiming as President at the time he bore ultimate responsibility for the decision to nationalise PrivatBank. Poroshenko is also one of Ukraine’s richest men, currently worth $1.6bn, according to Forbes.

Poroshenko’s council argued that the claim should be struck down on the basis of Act of State immunity, which is “the principle that it is contrary to international law for one state to adjudicate on the internal affairs of another state.” In other words, the UK courts cannot judge the decisions made by top Ukrainian officials concerning the domestic matter of whether a local bank is solvent or not.

However, Surkis produced an official government letter from a Ukrainian Foreign Ministry official that said the Act of State immunity would be waived in the PrivatBank nationalisation affair.

Acting for Poroshenko, the former Attorney General of England, Wales and Northern Ireland, Lord Goldsmith QC, told the court that Surkis misunderstood state immunity: “the Claimants’ blasé approach to issues of state immunity is concerning. Under English and international law, English courts are obliged to accord respect to foreign states and, by proxy, the individuals through which they act” and that immunity embodies “the principle that it is contrary to international law for one state to adjudicate on the internal affairs of another state,” according to a statement released after the judgment.

Lord Goldsmith went on to say that Surkis’ claims were “inherently political” and suggested that Surkis was bringing the case against Poroshenko to sully his reputation. Poroshenko remains active in politics and is the head of the European Solidarity Party, a large opposition fraction in the Rada. Poroshenko was defeated by the former comedian Volodymyr Zelenskiy in the 2019 presidential race and the two men remain bitter rivals.

Zelenskiy’s campaign was backed by Kolomoisky’s media empire, which is credited with helping Zelenskiy win the election and the two men were previously in business together. “Mr Poroshenko believes these proceedings have been orchestrated by Mr Kolomoisky, a known ally of the current Ukrainian president, Volodymyr Zelenskiy,” Lord Goldsmith said.

Justice Calver was largely dismissive of the entire case, which he said was weak and fuelled by ulterior motives. “In so far as the [Surkis] claims are premised on allegations that certain acts of the Ukrainian State were unlawful, those claims have no real prospect of success… [Surkis’] claims are premised on allegations of conspiracy and/or intentional wrongdoing, which have not been properly pleaded and/or have no real prospects of success,” the judge’s statement reads.

On the claims brought by Surkis that Poroshenko and Gontareva were not covered by Ukraine’s state immunity, the judge said: “I do not consider that [counsel for Surkis’] submissions on the state immunity question withstand scrutiny”.

Surkis’ lawyers hoped the immunity waiver letter from a mid-ranking official at Ukraine’s Ministry of Foreign Affairs, Volodymyr Lukianov, would counter the immunity claim, but the judge rejected the letter’s authority.

Justice Calver said: “It is clear from a straight-forward reading of that letter… that Mr Lukianov did not make a submission on behalf of Ukraine… nor did he waive any right of Ukraine to declare state immunity.”

In dismissing the Surkis case, Justice Calver said: “The Claimants' case led them having to dance on a pinhead.”

As head of Ukraine’s regulator at the time, Gontareva is also covered by the Acts of State immunity. Justice Calver described the case brought by Surkis against Gontareva as “extremely thin” and that, from the evidence, “it is not possible to infer dishonesty…which involves a very large leap of reasoning”. He concluded: “She is not an oligarch; she is a highly regarded, professional banker with more than 30 years’ experience”.