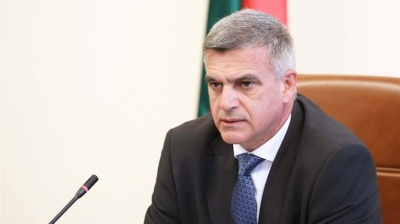 Former caretaker prime minister Stefan Yanev and members of his cabinets have initiated a new conservative party, Bulgarian Rise, which is expected to be pro-Russian.

Yanev, who was defence minister in the government of Prime Minister Kiril Petkov, was fired due to his openly pro-Russian position since the start of the war in Ukraine. He said he will set up a new party, Bulgarian Rise, which will fight to defend Bulgaria’s dignity.

Yanev, who was twice appointed prime minister by President Rumen Radev, was previously the president’s advisor. He became notorious after insisting that the word ‘war’ must not be used for the conflict in Ukraine as Russia’s President Vladimir Putin was calling the invasion a ‘special operation’. Yanev claimed the word ‘war’ had not been used in any Nato or EU document either.

“New, meaningful and useful for the society formation that will become a bridge between citizens and the state authority,” said Yaven during the ceremony for establishing the party.

A video of the ceremony was broadcasted by Dnevnik news outlet on May 5.

Yanev claims that his party will remain close to the people. At the same time, the party will have clear conservative and pro-Russian positions, which is makes it a direct competitor to the Bulgarian Socialist Party (BSP) and far-right Vazrazhdane.

It is not yet clear whether the new party will gain enough support to enter the next parliament.

There has been speculation that Radev unofficially participated in the party’s establishment but Yanev denied this, saying his project is independent.

The former prime minister also said that he expects an early election in the autumn as the ruling coalition is highly unstable.

While the four parties that back the government recently put aside their differences to back the sending of military aid to Ukraine, this followed lengthy disputes between the BSP and fellow coalition members.

While the BSP is struggling to retain the support of its pro-Russian voters, both Yanev and former BSP member Maya Manolova are setting up their own parties.

Manolova, a former ombudsman and also former leader of a civic anti-corruption project, is also setting up a political party. Her project will be aimed at the BSP’s voters and will focus on social issues. However, Manolova is also seen as pro-Russian and, if given the opportunity, is expected to enter a pro-Russian coalition in the future.

Kyrgyzstan: Eccentric health minister fights for his job amid claims of corruption and bullying
58 minutes ago
Azov commanders have remained behind in the Mariupol steelworks to continue the fight
1 hour ago
Russia hopes Chinese carmakers will help revive Moskvitch brand
2 hours ago
Russia may leave the WTO and WHO. In practice, it never really joined
2 hours ago
UN special rapporteur issues damning indictment on human cost of sanctions in Iran
7 hours ago