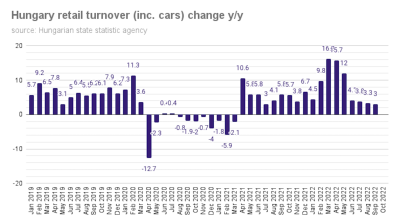 Retail sales growth in Hungary slowed to an annualised 3.0% in September (link), from 3.3% in the previous month, a sign that Hungarian households continued to adapt to higher inflation and rising energy bills, the Central Statistics Office (KSH) announced on November 8. Adjusted for calendar year effects, retail sales growth picked up to 3.0% from 2.4% during August.

The September increase in retail sales was almost entirely due to the strong demand for fuel similar to the past four months, as food sales have been falling since June as food inflation rocketed over 30%.

Fuel sales are capped at HUF480 (€1.2) per litre, while food sales fell for the fourth straight month as food inflation remains one of the highest in Europe.

In absolute terms, retail sales came to HUF1.45 trillion. Food sales accounted for 46% of the total, non-food sales for 36% and fuel sales for 18%.

Double-digit wage growth and pre-election transfers lifted retail sales in the first half. Between February and May, annual growth was between 10-16%, but spending has slowed every month since April as inflation continued to trek upwards.

A detailed breakdown of the data shows that adjusted sales of second-hand shops climbed 21.2% and sales at clothing and footwear shops rose 14.7%. Online and mail-order sales, accounting for 7.8% of total retail sales, fell 2.4%.

Hungary’s GDP growth slows to 4.0% in Q3
23 hours ago
Poll shows only one in five Moldovans happy with their government
23 hours ago
Montenegro’s tourist arrivals almost double y/y in October
1 day ago
LNG in Europe: ready or not?
1 day ago
Russia’s GDP at 4.4% decline in October, construction and agro stick out
1 day ago