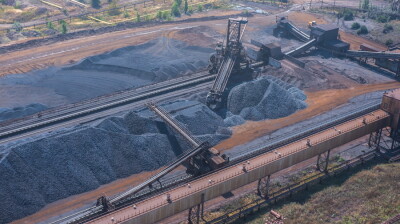 Leading Russian metallurgical company Metalloinvest has been upgraded to investment grade ahead of a mooted IPO by Fitch as Russia emerges from the miasma of 2020.
By bne IntelliNews June 29, 2021

A major producer of iron and steel, with metal prices soaring on the back of a commodities boom, Metalloinvest’s business has been flourishing, underpinning the upgrade.

Fitch Ratings has upgraded the company’s corporate rating to “BBB-” with a stable outlook from “BB+”/stable – an investment grade.

According to Fitch's statement, the rating upgrade reflects the company’s “robust financial results, underpinned by its commitment to a more conservative financial policy, namely the reduction of gross debt to $3bn, strong operational profile, including competitive cost position.”

“Traditionally Metalloinvest has a very competitive cost position. Strong operational results and further improvements to our credit metrics are expected on the back of favourable market conditions,” Deputy CEO and chief financial officer of Metalloinvest Alexey Voronov told bne IntelliNews.

Part of the company’s strength has been its ability to keep its debt under control. Metalloinvest's net leverage is expected to be sustainably below 1.0x net debt/EBITDA going forward, the company told bne IntelliNews.

“We highly appreciate the decision by Fitch to upgrade our rating to Investment Grade. We believe that entering the top league is the result of the implementation of our strategy supported by a consistent financial policy. Our strategic focus remains on high value-added products, including hot briquetted iron (HBI), which is the most environmentally friendly feedstock for greener steelmaking,” Metalloinvest said in a statement.

Iron prices have soared and are currently at nine-year highs, which has boosted the company’s bottom line. Metalloinvest is owned by metals tycoon Alisher Usmanov, who has built up the holding since the noughties into one of Russia’s leading metallurgical companies.

Usmanov has proved himself to be a businessman with a nose for long-term trends and a bold investor once he has spotted a trend. His most famous investment was to spot the potential of Facebook and spend almost $1bn to buy just under a 10% stake in the company in the midst of the 2008 crisis, only to cash out with a five-fold gain when Facebook eventually IPO’d.

“Reducing our debt and its service costs is one of our key priorities in accordance with the debt management programme approved in 2017,” Metalloinvest said in a statement. “By the end of 2021, we expect to consistently reduce gross debt to about $3bn. In addition, we managed to decrease the cost of debt service by almost 50% – from $370mn in 2017 to less than $200mn in 2020.”

The company pointed to its prudent financial policy, which “allows for strong liquidity position with no substantial debt payments for the next two years,” as part of the reason for the upgrade.

“On top of that, the company still has more than $600mn of undrawn credit facilities at its disposal and boasts a track record of positive free cash flow [FCF] generation throughout the entire industry cycle, including during the challenging period of the pandemic in 2020,” Metalloinvest said.

The upgrade comes as the company is considering a possible IPO on the back of current benign market conditions.

Metalloinvest shareholders and the board are exploring various options for increasing the company’s shareholder value, including listing shares on the Moscow Exchange, CEO Nazim Efendiev said in a recent interview with Russian newswire TASS.

“If shareholders decide to hold an IPO, management is ready to do all preparatory work quite quickly,” Efendiev told TASS.