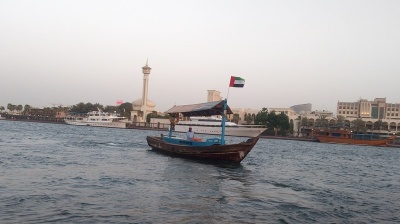 Fujairah on the Gulf of Oman is one of the UAE's little-known emirates. Pictured is Old Dibba Port.
By bne IntelliNews May 13, 2019

Who was behind the “sabotage operations” that the United Arab Emirates says damaged four oil tankers just outside the Strait of Hormuz on May 12 is not known but there have been some attempts to pin the blame on Iran.

World oil prices rose 3% by mid-afternoon GMT on May 13 after the attacks that damaged two Saudi vessels, a Norwegian vessel and another tanker, the origin of which has not been relayed by officials. One news report put out by RT included video footage which, the item said, indicated the vessels had been struck by Scud missiles. Norwegian ship Andrea Victory appeared to have been hit to the rear. It was still afloat, but was significantly damaged.

One attempt to blame Iran—involved in a growing sanctions showdown with the US which is building up its military in the Gulf region—for what occurred came from a senior policy analyst aligned with Abu Dhabi. Ebtesam Al Ekitbi, a member of the board of directors of the Arab Gulf States Institute in Washington, tweeted in Arabic: “The subversive work carried out by Iran near the territorial waters of the United Arab Emirates confirms the terrorist nature of the Iranian regime and the impossibility of its being subject to the rules of the international system and its laws.”

She followed up with: “The cost of a comprehensive confrontation with the United States will not be tolerated by the Iranian regime. Therefore, all kinds of indirect skirmishes will be resorted to by subversive acts and the movement of dormant cells against America and its allies.”

Her comments follow remarks from Iran’s Heshmatollah Falahatpisheh, a lawmaker who heads the Iranian parliament’s national security committee, who on May 12 said on Twitter: “The explosions of Fujairah showed that the security of south of the Persian Gulf is like glass.”

On May 13, Falahatpisheh made more remarks, saying, according to state news agency IRNA, that “ the explosions [near] Fujairah port could have been carried out by saboteurs from a third country who seek instability in the region”.

Iranian officials often use "third country" as a euphemism for Israel.

The US is attempting to strangle Iran’s oil exports by threatening secondary sanctions against any willing buyers and there are worries that hawkish officials in Washington could exploit the growing tensions to goad Donald Trump into a military clash with the Iranians, although the White House insists it does not want to move into a war situation with Tehran.

Saudi Arabia’s Energy Minister Khalid al-Falih confirmed on May 13 that two Saudi oil tankers were among the vessels targeted in “a sabotage attack”, threatening the security of global oil supplies. Fujairah, one of the world's busiest bunkering hubs for tankers, is located on the coast of the Gulf of Oman south of the Strait of Hormuz, a major oil shipping route and potential chokepoint at the mouth of the Persian Gulf. Iranian officials have warned they might close off the strait should the US attempt to physically interfere with Iran's oil exports passing along the waterway which opens out into the Indian Ocean.

In a press release, the Iranian Foreign Ministry called the situation with the attacks on the tankers “worrisome and dreadful” and asked for an investigation into what happened to the boats.

Iranian Foreign Ministry Spokesman Abbas Mousavi said "such incidents have a negative impact on maritime transportation security [in the Persian Gulf] and warned regional countries to be vigilant against plots orchestrated by foreign agents".

Separately, US Secretary of State Mike Pompeo arrived in Brussels unexpectedly on May 13 to meet with European officials to discuss the worsening situation in the Gulf.

Pompeo, who was initially set to fly to Moscow had his plane rerouted so that he could meet for talks with the officials prior to an official meeting with Vladimir Putin, now rescheduled to the Black Sea Russian resort of Sochi for May 14.

Pompeo’s visit to EU headquarters appeared to catch officials off-guard. According to the Financial Times, High Representative of the EU for Foreign Affairs and Security Policy Federica Mogherini said: "We were told during the night that he was planning to change his travel plans and have a stopover here in Brussels... We will be here all day with a busy agenda so we will see during the day how and if we manage to arrange a meeting. He is always welcome obviously, but there are no precise plans for the moment."

Some EU officials were reportedly scathing in describing the surprise stopover.

Journalist Laurence Norman, who is based in Brussels, tweeted:

A senior European diplo tells me @SecPompeo came to Brussels for a photo op -- Europe and US stand against Iran. "He wanted a photo op. We declined and stuck to the plan." #Iran #EU @FedericaMog

Pompeo was also planning to meet Nato officials to discuss details of why the US claims the threat level from Iran is rising. Last week, Washington announced the deployment of an aircraft carrier battle group and a B-52 bomber task force to the Gulf to counter what US officials claimed were "clear indications" of threats from Iran to US interests or its allies in the region.

Tehran described the statement as "nonsense" and said the US was using its military to engage in "psychological warfare" alongside its sanctions regime designed to force Iran to the table to negotiate Middle East policy concessions.